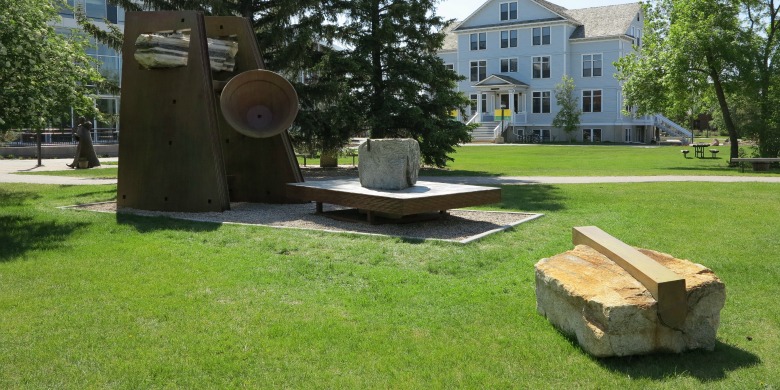 120605-augustanasculpture-banner01
The three-piece installation sculpture, "Augustana: Beyond a Certain Phrase," was unveiled June 3 to celebrate the centennial of the U of A's Augustana Campus in Camrose.

(Camrose) “It is a sensational piece of art,” said Keith Harder, chair of the fine arts department at the University of Alberta’s Augustana Campus in Camrose. “Even in the few days since it arrived, people have been talking about it, asking about it, thinking about it.”

The art in question is a massive three-piece installation named Augustana: Beyond a Certain Phrase in the heart of Augustana’s quad. On June 3, the 18,000-pound sculpture was dedicated to the campus in honour of its 100th anniversary last year. Among the collection of forms—crafted from welded steel and enormous prairie stones—are a polished steel bench etched with symbols of knowledge, and a large ceremonial bell.

Augustana Campus commissioned sculptor Royden Mills to take on the project. “Roy comes out of Edmonton’s welded-steel art scene,” said Harder. “But he has developed his own look. Both visually and structurally, his pieces are very solid.”

“One of the exciting aspects of the sculpture is that the incorporation of a bell invites us to think about new campus traditions,” said Augustana dean Allen Berger. “The hammer that Royden Mills has produced to ring the bell seems almost like a medieval weapon; we'll have to give careful thought to who gets to wield it and on what occasions.”

“There is a sense of progress in the sculpture,” said Harder. “A sense of potentiality, progression and movement. We didn’t want just a lawn ornament in quad, but a focus for events and a gathering space for both the Augustana and Camrose communities.”

“My family comes from Camrose,” said Mills, “and I know how tied to the earth that people are around here. Everything is possible with hard work. That is why I took eight months to build the sculpture by hand: I didn’t use prefabricated pieces or anything, since that wouldn’t have been consistent with the vision of the people of Camrose or the founders of the campus.”

A University of Alberta graduate and sessional instructor in Edmonton, Mills was inspired by his history in the community, his own experience as a student and his relationship with academia. He purchased all the elements of the sculpture from local Edmonton businesses.

“In dedicating this statue today,” said Berger, “we are both honouring a century of history and rededicating ourselves to the ideals that have informed our past.”