CERN, eat your heart out? 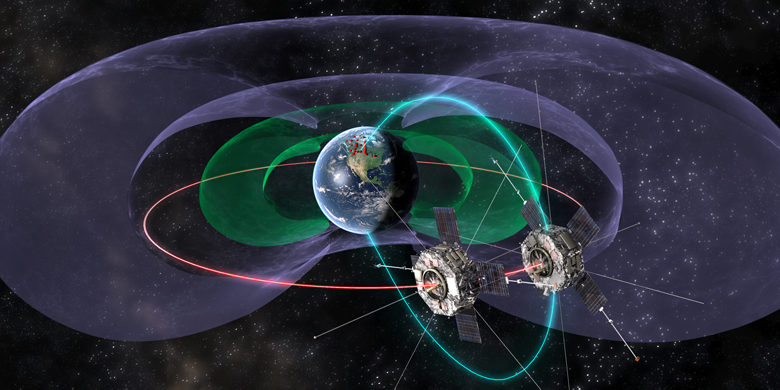 131204-spaceacceleratorbanner
This is an artist's rendering of the natural space synchrotron accelerator that exists in the Earth's magnetosphere.

(Edmonton)  Newly released research in Nature Communications from the University of Alberta has identified the existence of a giant cosmic accelerator above the Earth.

By analyzing data from NASA’s Van Allen probes, U of A physicist Ian Mann, together with his colleagues at NASA and other institutes, have been able to measure and identify the “smoking gun” of a planetary scale process that accelerates particles to speeds close to the speed of light within the Van Allen radiation belt.

This natural space “synchrotron accelerator” has scales of hundreds of thousands of kilometers, dwarfing even the largest man-made similar accelerators such as the Large Hadron Collider at CERN, which has a circumference of only 27 kilometres.

Mann says this particle acceleration—deriving energy from solar flares or eruptions and carried through space on a solar wind—exists in the region of space dominated by the Earth’s magnetic field, where satellites fly, known as the magnetosphere. The discovery is a jumping-off point for understanding space storms and determining how to protect man-made systems—on Earth and in space—from potential damage from space storms and severe space weather.

“The puzzle ever since their discovery has been how do the particles get accelerated up to nearly the speed of light?” said Mann.

Mann says this highly relativistic particle acceleration, which can damage satellites and pose a risk to astronauts during space weather storms, is akin to the relationship between a surfer and a wave, in that the particles repeatedly catch a “ride” on a wave that sends them rocketing around the planet. As they circle the Earth, the particles may be picked up again by the same wave, which will boost its speed even further. The result is a perpetual cycle wherein the particles “get repeatedly accelerated by waves that are coherent on truly planetary scales spanning hundreds of thousands of kilometers,” Mann said.

And like climatic weather storms, space storms can be anywhere from mild to powerful. Mann says these solar storms can have variety of effects on technological infrastructure on Earth, from mild disruption of satellite communications to widespread damage of telegraph systems as occurred during the Carrington solar storm of 1859, manifested on Earth as bright Aurorae seen across the globe.

“There’s eyewitness accounts published in newspapers of telegraph wires setting on fire as a result of the electrical currents that were driven into ground infrastructure due to these space weather storms,” said Mann, adding that the potential damage from a similar-sized space storm in today’s highly technological world has been forecast to cost trillions of dollars in loss and repair.

U of A: grooming the space weatherman

Mann says understanding the physics of space weather is still in the discovery phase, but with results such as this, researchers are moving closer to producing more accurate space weather forecasts.

“We’re still trying to piece together what a really big space storm would look like, and the impact that it might have on infrastructure such as operating satellites and ground power networks—and ultimately trying to improve some of our protection of those systems against severe space weather,” said Mann. “With this discovery, we’re starting to put the pieces together to understand how this radiation might be created and, therefore, understand how extreme the response to severe space storms might be.”

CERN, eat your heart out?
Newsroom