Champion of the liberal arts 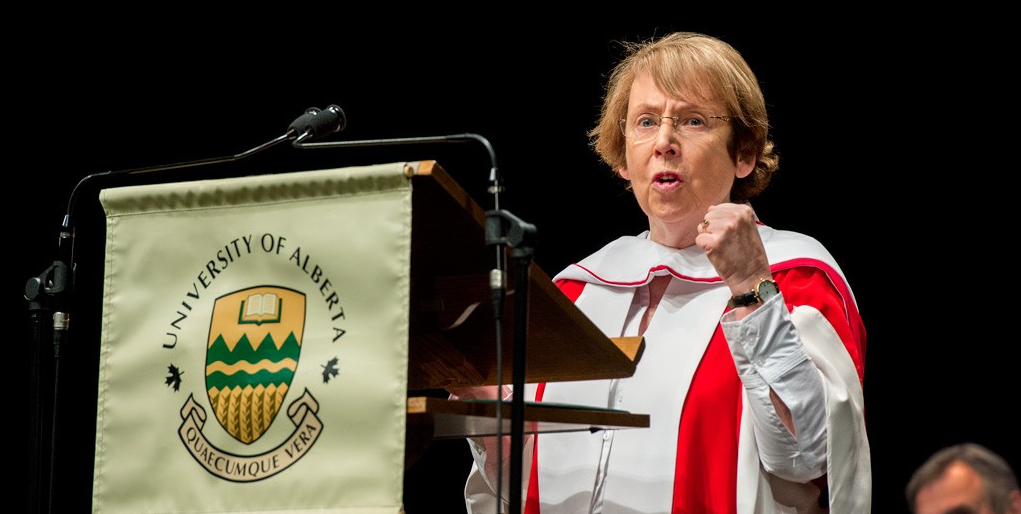 (Edmonton) University of Alberta arts graduates can be proud knowing that their predecessors have made a difference in the world, and that they hold a very valuable degree, said Patricia Clements, an arts leader on and off campus.

Addressing graduates of the Faculty of Arts and Faculty of Extension as she received an honorary doctor of letters degree June 10, Clements championed the societal value of a liberal arts degree, which she says is “under attack” by critics questioning whether good jobs can be had.

“What can you do with an arts degree? Just about anything you want to do. You can, and I’m sure you will, change the world,” she told graduates.

Clements, a U of A alumna who has been instrumental in transforming the role of women on campus, joined the Faculty of Arts as an assistant professor of English and became the first woman dean of arts at the U of A in 1989, leading the university in its development of employment equity policy. She also guided the faculty in several valuable initiatives including the Parkland Institute, a respected public policy think tank, and the school in Cortona, Italy. Clements is also founding director of the Orlando Project, which created and delivered online an award-winning electronic history of women’s writing. The project is now in its ninth year of online publication with Cambridge University Press.

Over the course of her career, Clements has received several awards for her dedication to the arts, including an Outstanding Achievement Award of the Society for Digital Humanities. She was elected as a fellow of the Royal Society of Canada and served as president of the Canadian Federation of the Humanities and Social Sciences.

Clements credited Canadian policy with giving her a post-secondary arts education she treasures. “It gave me a life I never dreamed possible.”

By the late 1950s, with the baby boom building, the federal government invested in 19 new universities and women’s enrolment increased. “It allowed people like me to get a university education” and also increased the labour market as newly qualified women entered the workforce.

After graduating from high school in Saskatchewan, Clements came to the U of A to get an education certificate, but “somewhere between physics and philosophy—more in the direction of philosophy—I fell in love with the arts,” and switched to honours English, where she learned about “the wide world of cultural differences … how to think, and how to write.”

Graduating with a bachelor of arts degree from the U of A in 1964, Clements, who also did doctoral studies at Oxford University, has been grateful for her education ever since. “My debt of gratitude to this university is profound,” she told her audience. “Its wonderfully taught BA in English opened my mind and utterly changed my life. It gave me the joy of teaching and research in a Department of English that was on its way to becoming one of the very best in the world. Its Faculty of Arts gave me the privilege of serving as its dean, and so of working with colleagues across the whole range of the humanities, the social sciences and the fine arts.”

But today, Clement said, she worries about government budget cuts that have undermined the arts, and about an “urban myth” that arts graduates don’t get good jobs.

Clements noted studies show that the financial value of a liberal arts degree is on the rise, with Canadians holding BAs now earning 40 per cent more than those with high school diplomas. As well, she pointed out, a British Council survey showed that 44 per cent of international leaders in public, private and non-profit sectors across the globe were trained in social sciences, with a further 11 per cent trained in the humanities.

“Do arts graduates get good jobs? You bet your life they do. The BA is productively employed everywhere in our society, our culture and our economy,” Clements noted. Whether in business, government, fine arts or the judiciary, the arts degree is “the foundation for informed debate on public policy and a major presence in corporate and volunteer boardrooms, as well as in creative and educational institutions.”

Eminent scientist David Suzuki happens to have a BA, which, Clements noted, he considered “the best part of his education.”

An effective BA program, she added, “develops not only creative people—the inventors of ideas, processes, things—but also independent thinkers, who will not consume without question what hype and hypermarketing feeds to them, who are able to assess and review the attitudes of other people and their own.”

She advised the new graduates to “be yourself, follow your passion, continue to learn.” And, she added, “next time somebody asks you what you can do with your BA, why not suggest they ask Rachel Notley what she is doing with hers?”

Champion of the liberal arts
Newsroom