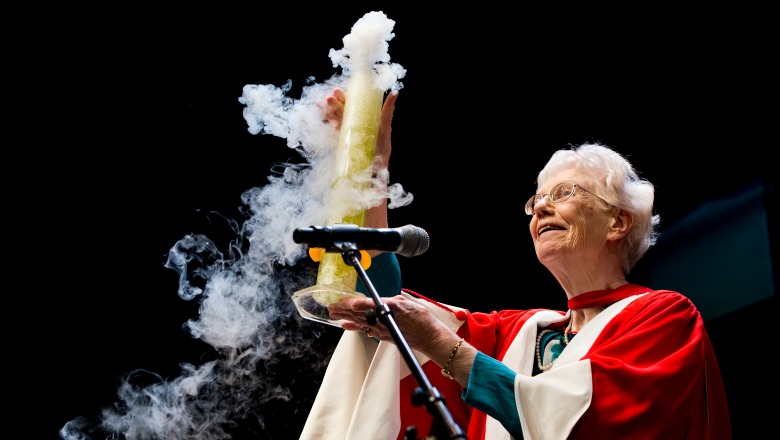 (Edmonton) Watching dough magically transform into cookies before her childhood eyes was the mystery that set Margaret-Ann Armour on her life’s course, inspiring her to become of the most accomplished chemists and educators in Canada.

Speaking to graduands in the Faculty of Education at convocation Tuesday, where she received an honorary doctor of science degree, the international ambassador for women in science and engineering recalled the importance of mentors—and insatiable curiosity—in driving her career.

“When I was about five years old, I was allowed to bake my own cookies,” said Armour. “My curiosity was aroused. Why was I not allowed to eat the dough before it went into the oven, yet the cookies tasted so good when they came out? What was going on in the oven?

“Of course it was a chemical reaction, and when I discovered from a great (female) high school chemistry teacher that chemistry could provide answers, I was hooked.”

For decades, chemist Margaret-Ann Armour has fought relentlessly for the inclusion of women in disciplines long dominated by men, first in her role as co-founder of WISEST (Women in Scholarship, Engineering, Science and Technology), and most recently as dean of diversity for the U of A’s Faculty of Science, where she helped to increase the percentage of women faculty members.

Born in Scotland, Armour earned her first two degrees at Edinburgh University and worked as a research chemist in the papermaking industry for five years before receiving a PhD in physical organic chemistry from the U of A in 1970.

Her research since in the U of A’s chemistry department has focused on developing and testing methods for recycling or disposing of small quantities of waste and surplus chemicals. Among her many accolades, Armour was twice named one of Canada’s 100 most powerful women in 2010 and 2008 by the Women’s Executive Network, and was admitted to the Order of Canada in 2006. She received the Governor General’s Award commemorating the Persons Case in 2002.

Behind all of her success, however, lies the curiosity first awakened by those cookies in the oven, she said. “Are you curious as to why I’ve brought this orange and this Styrofoam cup?” she asked, before dissolving the cup with orange oil extract.

“I like to think of our education as moving from the dark of not knowing to the light of knowledge and understanding,” she concluded, and then set off another of her trademark chemical reactions, turning a smoking beaker of liquid from dark blue to light yellow.