“He really sets an example of what it means to be excellent in the classroom, on the track and in life.” 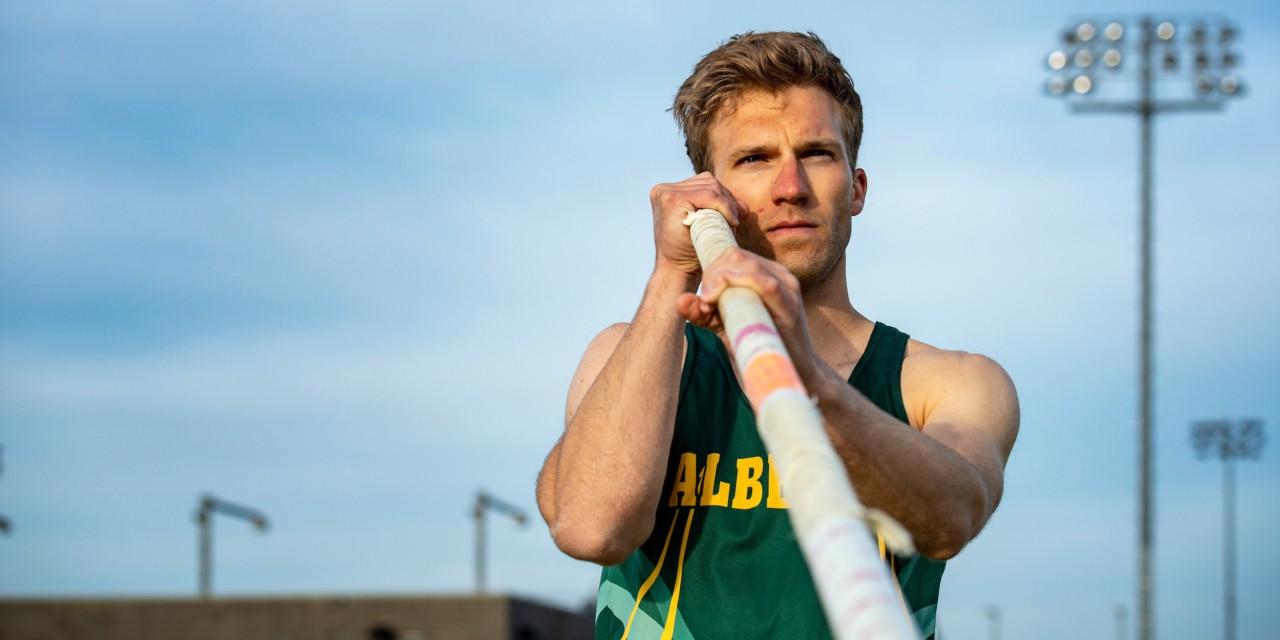 After beating testicular cancer three times in as many years, Spencer Allen came to the U of A, where he helped the Golden Bears win Canada West gold last year with a record pole vault. “It provided me with different perspectives," he said. "I don’t know where I’d be in life if I hadn’t gone through it.” (Photo: Richard Siemens)

Heading into the 2019 U Sports track and field championships, Spencer Allen—already the greatest pole vaulter in University of Alberta history—was the heavy favourite and set to join just a handful of athletes to win three consecutive national championships in the sport.

Ready to rewrite the U Sports track and field record book, Allen arrived in Winnipeg only to find out his poles were destroyed in transit.

This misfortune forced Allen into action using borrowed equipment. He still fought his way to a respectable 4.95 metres to finish a mere five centimetres behind the day’s highest flyer from Guelph.

For context, Wes Moerman, U of A track and field head coach, likened the prospects of being at your best using a borrowed pole to Connor McDavid winning a scoring title using a wooden stick.

“Was it unfortunate? Yes. Is it an excuse? Not for Spencer,” said Moerman. “Nobody watching even knew those weren’t his poles. And he wanted it that way.”

And while a silver medal is nothing to scoff at, considering Allen jumped a full imperial foot higher a year earlier in leading the Golden Bears to U Sports team silver, this defeat, at least on the surface, should have been devastating.

It turns out beating testicular cancer three times in three years as a kid just out of high school affords survivors a healthier-than-normal life perspective.

“I’ve been clear for almost six years as far as anyone can tell,” said Allen. “I think I learned a lot going through it, as anyone would.”

He said the experience left him with a new appreciation for the little things and every day, as cliche as that sounds, as well as how important people were—his friends and family in his hometown of Kamloops, B.C.—in his recovery.

“As terrible as it was, and as hard as it was on me and my family, I don’t know if I would change going through it,” he said. “It provided me with different perspectives. I don’t know where I’d be in life if I hadn’t gone through it.”

Besides a full team of supporters, the one constant through Allen’s cancer ordeal was his love of track.

After each diagnosis, each spread roughly a year apart, he would follow up treatment with trips to the track.

“My goal was always getting back on the track. I would be quite drained by the end of a chemo cycle, so I would start by walking. By the second week, I would start jogging.

“Although I didn’t do track things, I would keep my head in it and use it as a motivator.”

After the third bout of cancer and treatment, Allen chose to stick close to his support network and attended Thompson Rivers University, where he continued with track and took an interest in kinesiology.

“I have had a lot of injuries over the years and have seen many different therapists for different rehabs, and really liked the way they could help people return to activity,” he said.

On U of A track

In 2015, after having been cancer-free for two years, Allen moved to the U of A thanks in part to Moerman, who knew the star pole vaulter from his time as a track coach back in B.C.

“He has a lot of people rooting for him because of how he has gone about it,” said Moerman, who had his sights set on recruiting Allen since taking the helm of the U of A track and field team in 2012. “He’s always been a powerful athlete. There is something special when you see him coming down the runway at full speed and hitting the mat.”

That season, Allen finished second at the Canada West championships to longtime competitor-turned-teammate-and-friend Nathan Filipek. Allen would flip the script at his first trip to the U Sports national championships, edging out Filipek for silver.

From there, Allen began building his U of A legend.

In 2017, Allen followed up a Canada West title with a gold medal at the national championships. Later that year, the second-year Golden Bear caught on with Team Canada to compete at both the francophone and world university games.

And while that year was a blinding success personally, something was missing.

Anchored by international sprint star Carline Muir, the Pandas won their second straight Canada West title, while Allen and the rest of the Golden Bears could muster only a second-place showing.

“We saw what we missed out on,” said Allen. “From the very start of the next season, you could feel the energy throughout the whole season. Everyone was doing what they could to work towards that banner.”

Fast-forward to the 2018 Canada West track and field finals in Winnipeg.

Moerman remembers the pole vault competition running long, as it often does, and ending up being one of the last events to complete.

“You could see our team gathering around the pole vault pits. You could feel the team’s confidence grow as Spencer was the hammer we were holding back.

“I’d look over and you always knew when the bar went up, that was our guy.”

In the end, the Golden Bears won Canada West gold for the first time in more than a decade on the strength of Allen’s Canada West record vault of 5.31 metres.

“The value of the team is it spurs you on to hidden reserves and effort you didn’t realize you had,” said Moerman. “Amongst that group of guys, there was a respect and hunger for each other and they just refused to lose.”

Heading into the 2018-19 season, Moerman formalized Allen’s leadership role and made him a team captain.

“I tend not to be the most outspoken person, I’m fairly introverted, so to be one of the central people when it comes to team meetings and trying to be one of the more visible members of the team was a challenge for me, but quite rewarding,” said Allen.

Moerman said Allen was instrumental in shaping a team culture of giving back, on and off the field. He promoted literacy formation through read-in weeks, led community health initiatives, organized equipment drives for underprivileged schools, supported various mental health initiatives and seemingly had time for every person on the team.

“He always took the time to speak to people on the team and get to know them,” said Moerman. “He was truly interested in them and never really wanted to talk about himself.”

Allen spent the winter semester as a practicum student in exercise oncology researcher Kerry Courneya’s Behavioral Medicine Lab, which examines the interactions of exercise and cancer patients. Courneya is the Canada Research Chair in Physical Activity and Cancer.

Allen was active in all elements of the lab, whether it was to help recruit participants, test heart and lung function of subjects, supervise exercises or review lab functions.

For his efforts over his final year, Allen was awarded the U Sports Student-Athlete Community Service Award.

With a bachelor of science in kinesiology in hand, Allen said he now hopes to serve in Courneya’s lab in some capacity while he takes his shot at pole vault glory at the national level. Whatever leap Allen takes, Moerman said it will be done the right way.

“It’s pretty easy to look at what he’s done, but the real story is how he’s gone about it,” said Moerman. “The way he has been able to earn respect across the country and within the team, truly valuing every member of the team and trying to make everyone feel as included as possible, has been a highlight of my time here.

“He really sets an example of what it means to be excellent in the classroom, on the track and in life.”