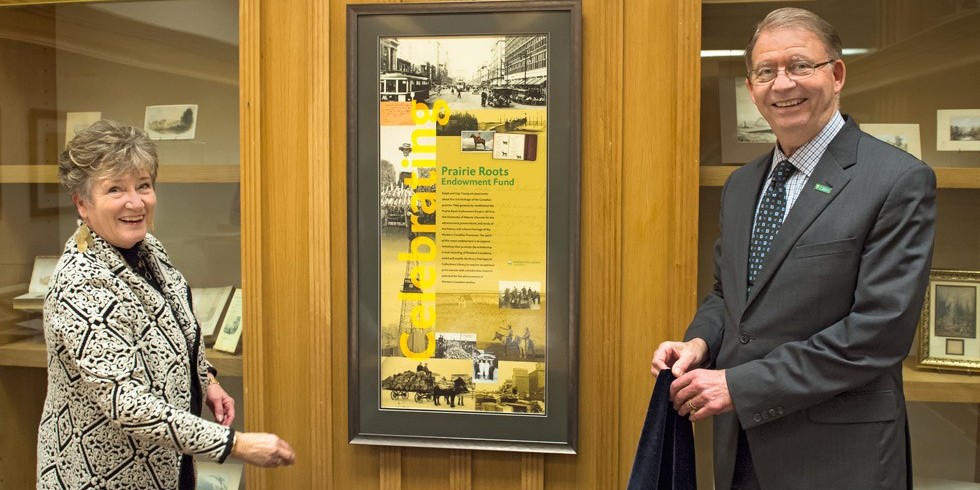 (Edmonton) Several decades ago, University of Alberta alumnus and chancellor Ralph Young was in a prominent Vancouver bookstore, when he was approached by the famously protective storekeeper who, according to legend, was notorious for holding back sales of items to those whose collection mettle wasn’t to his liking.

After a quick chat, the storekeeper deemed Young’s interest in Western Canadian history to be sufficient to allow him and his wife Gay to continue their hunt, but not before offering up a little advice.

“Look, if you are serious about collecting, you have to have a focus,” said the storekeeper, who scurried off to retrieve a copy of Peel’s Bibliography of the Canadian Prairies to 1953, a book based on the work of famed U of A prairie print-material historian Bruce Peel.

“If you are going to be serious about Western Canadian history, you have to have this book,” said the storekeeper. Young says he still has it.

The truth is, while Young’s deep interest in Western Canadian history, culture and heritage has been too broad to ever meet the storekeeper’s high standard of collecting, Young had still managed to amass a formidable collection of antiquarian books.

“I’ve had an interest in Canadian history since I was in public elementary school,” said Young, who was born in Saskatoon to parents who hailed from Winnipeg and has an extended family the majority of whom have moved west from Ontario. “I wouldn’t say I have a great collection, but it is a good collection.”

In 1999, Young had Merrill Distad, a co-editor of Peel’s Bibliography who was associate chief librarian at the time, stop by his home to see whether the U of A could use any parts of his library. “He was extremely knowledgeable and appreciative of the books I had, and was anxious to have some of the books at the university.” A few weeks later, Young and Distad loaded 37 boxes of books to launch the Ralph Young Western Canadian Collection at the Bruce Peel Special Collections Library.

From there, it only seemed right that the Youngs would be invited to assist with the funding campaign to help the university bring home the wayward Sam Steele collection in 2008. “I think Ralph’s involvement in bringing back the Sam Steele collection was the impetus for this endowment,” said Gay. “It became one of the strands we wanted to try to follow up on.”

In 2011, the Youngs cemented their dedication to the university and the preservation of the rich heritage of the Canadian Prairies when they pledged $1 million to the Bruce Peel Library to establish the Prairie Roots Endowment Fund, which supports initiatives that promote scholarship in and recording of Western Canadiana. Using the first proceeds from the fund, the library recently unveiled the first fruits of the endowment.

“I think it is so important for any community or region to have an identity, and part of our identity is the history and culture that we’ve inherited in this great part of the world, including an Aboriginal history that dates back several thousand years,” said Young.

“The more we can understand and appreciate the background and history and heritage of Western Canada, it will lead to a greater respect by people across Canada.”

Amongst the eight treasures recently acquired through the fund are a photo album depicting, among other things, the early days of St. Stephen’s College on the U of A campus; a photograph album for a Canadian Pacific investors’ trip across Canada in 1887; and an extensive Royal North-West Mounted Police file on the drowning of George White during construction of a steel bridge across the Bow River upriver of Medicine Hat, where White’s body was found.

“It just so happens that we are able to cover off some important themes here, including immigration to Western Canada, First Nations history, important historical events like the Red River rebellion and fur trading—it is all covered in the first eight items,” said Robert Desmarais, head librarian of the Bruce Peel Special Collections Library.

For Gerald Beasley, U of A vice-provost and chief librarian, getting these primary source documents has become a priority for university libraries because they are among the few places equipped to preserve and explore these riches.

“Our knowledge of history in the Prairies must come from documents like these,” said Beasley. “This fills my heart, knowing that thanks to the Youngs’ generosity, we are able to provide access that will bring expertise to bear on these items to advance knowledge of the Prairies. That to me is the exciting thing about working at the U of A—that we are actually bringing the very best sets of eyes in contact with the very best sets of materials to create new knowledge.”

“For the Peel Library, we are going to be able to say to researchers, ‘You can come here, do your research and you’ll have primary source documents that will give meaningful context to the rich history of the Western Canadian provinces.’”

Knowing that the U of A will become a beacon for the trove of materials that help tell of a history they hold dear has brought the Youngs a great deal of satisfaction.

“It makes us extremely happy that the fund is doing something meaningful,” said Young. “We wanted to see the endowment do some good and create some value that can be appreciated by many for generations to come.”

Pieces of the Prairie past

1. Camping in the Canadian Rockies (1908): This is a self-published, leather-bound photo journal from a group of Bostonians who arrive in Vancouver and make their way to Banff for a camping trip in July 1908. The author’s vivid descriptions of such places as Emerald Lake, Yoho Valley, Lake Louise and Mount Assiniboiners, allow you to join the camaraderie of a merry band of campers. Photographs depict men and women mountain climbing, camp life and the landscapes of the Rocky Mountains of Alberta, all in the early 20th century.

2. Photograph of Chief Duck, Blackfoot Reserve, Southern Alberta, by Harry Pollard (1912): This 13 x 10-inch original hand-coloured framed photograph depicts Chief Duck of the Blackfoot atop a horse. He is dressed in fully decorated clothing with a feather headdress. His white horse also has some ornamentation. The horse stands with its feet in the water, and land is visible behind.

3. Royal North-West Mounted Police incident report and related correspondence detailing a Lethbridge drowning (1914): These documents regard the drowning of George White, a construction worker who died while swimming in the waters at the feet of the Bow River Syphon Camp, set up by the Wisconsin Bridge & Iron Company Contractors to house workers building a steel bridge.

4. Alberta Department of Agriculture Supplement to Alberta Horse and Cattle Brands Being Brands Recorded During the Way 1914 (1915)

5. Portrait of 19th-century Métis leader Andre Nault: Although Nault was not Métis himself, he was a cousin of Louis Riel and a member of the Métis settlement at Red River. Nault led several resistances against the encroaching Canadian forces, including capturing Fort Garry in 1869. He also helped launch the Red River Rebellion by repelling William McDougall and his surveyors from the Métis land at the Red River Colony. Nault advocated for Métis rights and culture for the remainder of his life and was directly appointed by Riel as a councillor of the Union Saint-Alexandre.

6. Presentation photograph album for a Canadian Pacific investors trip across Canada (William Notman, 1887): The album represents the cross-Canada trip in 1887 of four English lords: Lord Latham, a major investor in the Oxley Ranch; Lord Elpinstone; the Earl of Kintore; and James Carnegie, the Earl of Southesk, in the private rail car Saskatchewan. The 65 images in the album mostly show what would be seen along the Canadian Pacific Railway between Vancouver and Calgary.

7. Manuscript diary, ledger and log of a Red River trader (1853–1857): This 48-page manuscript details the commerce, economy and hard work trading furs for violins, champagne and the other necessities of life in the Red River area of Saskatchewan, Manitoba and North Dakota.

8. Photo album by L. Patterson (1915–1922): A student of St. Stephen's College, Patterson compiled more than 250 photographs depicting Alberta College, St. Stephen’s, scenes around Edmonton and views of the Rockies and other locations. The principal of Robertson College, Samuel Walter Dyde, is depicted along with fellow classmates and many U of A buildings.