Changing course on the discovery trail 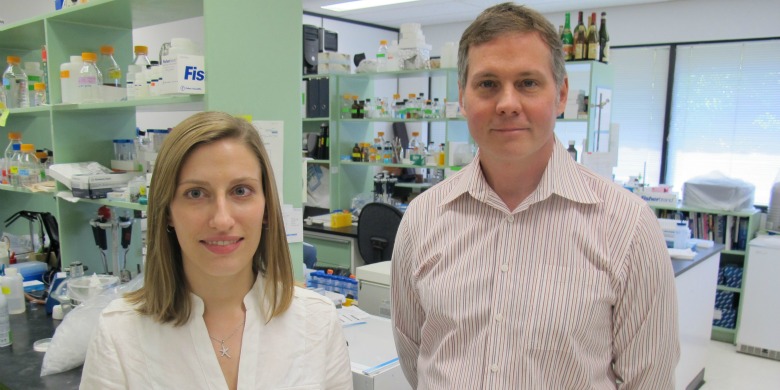 (Edmonton) Scientist Howard Young’s research has taken a dramatic, unexpected turn in the last few months, thanks to a serendipitous chain of events that could lead to a genetic test that can predict heart failure in certain people before it happens.

It started when members of his team, Delaine Ceholski and Cathy Trieber, discovered a new mutation in a protein called phospholamban, which they predicted would cause the heart to be less responsive to changes in the body and eventually lead to heart failure. One month after they submitted their paper to the Journal of Biological Chemistryfor review, their work was validated when—in completely separate research—the mutation was found in two patients in Brazil.

“We predicted it exactly,” said Young, an associate professor in the biochemistry department of the Faculty of Medicine & Dentistry, and researcher at the National Institute for Nanotechnology. “It’s interesting, because as basic researchers you feel like you have to constantly defend your research and how relevant test-tube work is to patients ... and then one day, to our surprise, we were right.

“I expected to be right, but not in the time frame that occurred. It happened quickly.”

Shortly after that, Young was asked to speak at the Centennial Lectures, a speakers’ series offered by the faculty as a lead-up to the medical school’s centennial year in 2013 to spotlight the translational work of its researchers.

Young was paired with cardiologist and researcher Justin Ezekowitz of the Department of Medicine. Each became interested in the other’s work, and now the two are pairing up to screen patients’ blood samples for mutations in the phospholamban protein.

“If someone had asked me last September if we’d ever get into sequencing patients’ genes and trying to discover mutants, I would say ‘no, you’re wrong,’ ” said Young. “But now we’re very interested in starting large sequencing studies to try to find more mutations.”

Through his research, Young thinks he has established good prediction models for heart disease. If his research group finds a mutation in phospholamban through blood screening, Young believes he can predict the severity of the mutation and whether or not it will be associated with disease.

“It will be truly personalized medicine,” said Young. “If we know they [patients] have a mutation before disease, monitoring and early treatment could improve and extend the quality of life for these patients.”

Young and researchers in his lab will look at blood samples from about 750 patients at the Mazankowski Alberta Heart Institute. Young expects to find at least two or three people with a mutation in phospholamban.

They’ll also look for other mutations that have not been previously discovered. “There’s a related protein to phospholamban in the skeletal muscle and the atria of the heart, so we’re branching out and going to see if we can identify new mutations, because no mutations have been identified in that protein,” he said.

Changing course on the discovery trail