We want to give people hope. The situation is good here but maybe the future will get even better.

Only one week after arriving in Canada on a scholarship for displaced persons, Aref Sayegh jumps in to help others. 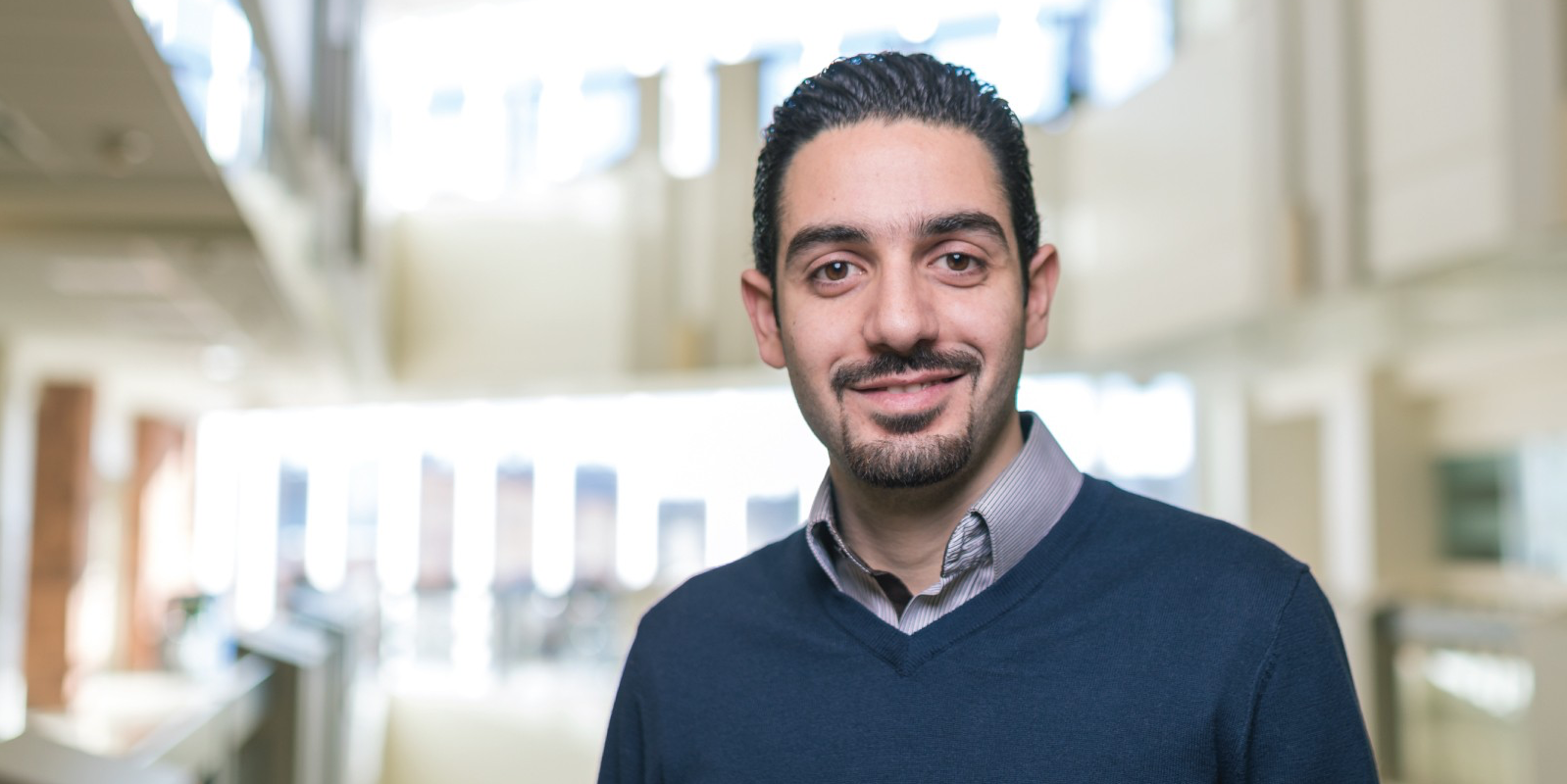 After fleeing war-torn Syria, Aref Sayegh is now a UAlberta grad student whose research is helping other Syrian refugees adjust to a new life in Canada.

When Aref Sayegh fled Aleppo, Syria, in 2015, he left behind an ancient and once beautiful city now scarred by bombs and fighting.

A move to Lebanon made life safer but not easier. A small country with a large population, Sayegh struggled to find a job and wasn’t able to use his electrical engineering degree from the University of Aleppo. He felt his best chance for a better life lay elsewhere.

In August 2016, Edmonton beckoned with both safety and opportunity. Sayegh was offered a President’s Award for Refugees and Displaced Persons to pursue his master's degree. This donor-supported award covers the cost of tuition and living expenses for a year for up to 10 undergraduate or graduate students.

Another draw to Edmonton was family. Sayegh joined his twin brother, Bassel, already a U of A student who had arrived on campus in December 2015, supported by the congregation of St. Joseph’s College. Once he arrived, however, it didn’t take long for Sayegh to start making his own connections.

Sayegh quickly applied to work on a research project exploring how the Canadian government can make life better for Syrian refugees. His own refugee experience, combined with his fluency in English and Arabic, made him a perfect choice to interview 100 Syrian refugees now living in Edmonton and Lethbridge, Alta.

“When I met Aref he had only been here seven days,” said Sandeep Agrawal, an urban planning professor and supervisor of the research project. “I wasn’t expecting that he’d be ready to work or would understand what it involved to do the research.”

Sayegh dove in and is now a key part of the project. “I am getting lots of experience by doing the research,” he said. “It’s also a good chance to give back to the university because it is the only one that held my hand and gave me the opportunity to do a master’s degree.”

Many of the families Sayegh spoke with are finding it difficult to adjust to their new life in Canada. “They need more time to learn the language and then find a job,” said Sayegh. “Once they find a job, they will feel more secure.”

Talking to Sayegh allows these families to have open conversations—something for which they are grateful. Those more open conversations, in turn, will lead to more accurate data for the research project and, ultimately, better policy.

“It’s fun for me to meet the families and talk with them,” said Sayegh. “And my mother, father and younger brother arrived here in December, thank God, so finally we are together like we always used to be. We are all safe now.”

By helping people like Sayegh, who has in turn helped others, donors who supported the President’s Award for Refugees and Displaced Persons are truly changing lives far beyond the university.

“We want to show where there are gaps and additional services needed to help make life better for the Syrian refugees,” said Sayegh. “We want to give people hope. The situation is good here but maybe the future will get even better.”

Agrawal hopes to submit the project's findings to the federal government by July.

—With files from Bev Betkowski

Supported by caring donors, many more University of Alberta students have the opportunity to achieve their potential and then go on to uplift our communities. During the week of Feb. 27, we are sharing stories of how, by investing in UAlberta, donors change lives. Read more at uab.ca/thanks