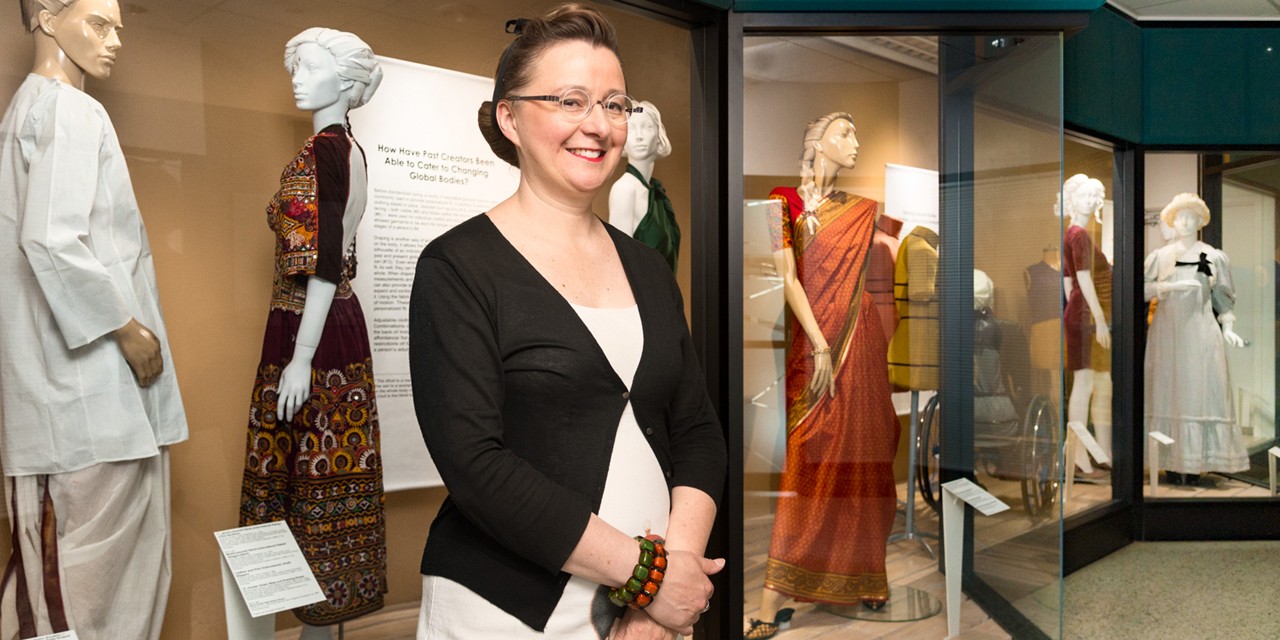 In the frustrating quest of clothes-shopping, women are quick to blame themselves when trying something on for size. But the real culprit is the garment, says a University of Alberta fashion expert.

“There is chaos in women’s wear,” said Anne Bissonnette, a material culture professor in the Faculty of Agricultural, Life and Environmental Science. “The whole system is problematic, and women don’t know that the problem is not them.”

Bissonnette and her students are bringing the myth of size standards out of the closet in a new exhibit, Misfits: Bodies, Dress and Sustainability. The exhibit, which also includes a Fashion Design Manifesto drawn up by Bissonnette and her students, points out the “absurdity of our present system,” she said. It challenges musty standards that were patterned on measurements developed nearly 80 years ago, but still shape today’s clothing.

Developed in 1939-40 by the American Bureau of Home Economics in the first science-based study of its kind, the current sizing system has been tweaked over the years, but not really changed. At the time, the study suggested adopting a range of options that already existed in menswear, but it never caught on for women’s clothing.

“We are all deviant, there is no one standard size. Body shapes are different on a global scale,” said Bissonnette, who notes how sizes can vary drastically among different countries. “What works on a typical fit model in Asia may not be what fits someone in Africa or North America.”

Men tend to have fewer problems in finding a good fit because their bodies are not as diverse. “Their body fat is distributed differently than in women, who store it in their hips, thighs and buttocks. That means there’s so much more variance in shape,” she said. As shoppers, men also have a choice of short, regular and tall options and specific dimensions (like a size 36 waist), that under Canadian law, must be accurate.

By the same token, under guidelines set by the Canadian General Standards Board, clothing manufacturers aren’t required to use specific dimensions and can instead use ‘coded’ size labels (like 000 to 14) that don’t need to be precise by law. For a lot of women, that means poor fit and dressing room disappointment.

“For people who don’t like shopping or have less confidence, the last place they want to be is in a store, because they can’t find clothing that fits them.”

And it’s not about vanity, Chartrand added. “Having good-fitting clothing is not superficial, it creates the impression of who you are. It’s not vain to want clothing you are comfortable in and look good in.”

While petite sizes, plus sizes and more recent features like elasticized tummy control panels have evolved to offer more choice to the flummoxed female shopper, they are still just band-aids, Chartrand argued.

“They don’t change your figure drastically and they don’t accommodate the body as it changes. And the gap between sizes dooms everyone who doesn’t fit precisely into what’s available.”

Clothing manufacturers should instead scrap the old sizing system and tap into current research, using 3D body scanners—similar to the kind used in airports—to understand how real bodies occupy space, Bissonnette suggested. In fact, a movement is underway using modern technology to survey Americans and Canadians on accurate sizing and create a wider database to better design clothing and vehicles.

“The standard should in fact be several standards for varying body types, heights and weights. That’s the key.”

And, she added, it should be a global system, so people can find garments that fit them in any country—an idea she thinks is sensible for modern immigration trends and manufacturing practices.

“They’ve lost focus on their role as problem-solvers. Good design is not just about designing pretty things to wear to the club, it’s about solutions. Our bodies lose and gain weight, even in a single day. It’s not rocket science to factor this in,” she said.

Adding buckles, multiple button adjustments, ties and even old-fashioned lacing into design can make a garment more figure-friendly and useful in the long term.

While Bissonnette is skeptical about whether the rag trade would reshape its labelling rules, large retailers on the scale of Wal-Mart could lead the way—if the desire was there. But, that’s not likely, given the extra cost to bump up inventory that would be passed on to the customer, Bissonnette added.

Retailers are also reluctant to step outside standard sizing for fear of possible stigma.

“No one wants to stand out as accommodating ‘deviant’ bodies, because that forces their customers to identify themselves that way,” Chartrand said.

Ultimately, that means a lot of perfectly good clothes eventually makes it way to landfills.

“In the long run, better design and labelling would pay off in terms of consumer satisfaction and sustainability, because buyers would walk away from the fitting room happier than they are now, and might hold onto their purchases longer,” Bissonnette said.

“If we are going to buy less, we need to get more from our garments.”

Misfits: Bodies, Dress and Sustainability runs in the U of A’s Human Ecology Gallery for public viewing Monday to Friday 8:30 a.m. to 6 p.m. until Sept. 13.