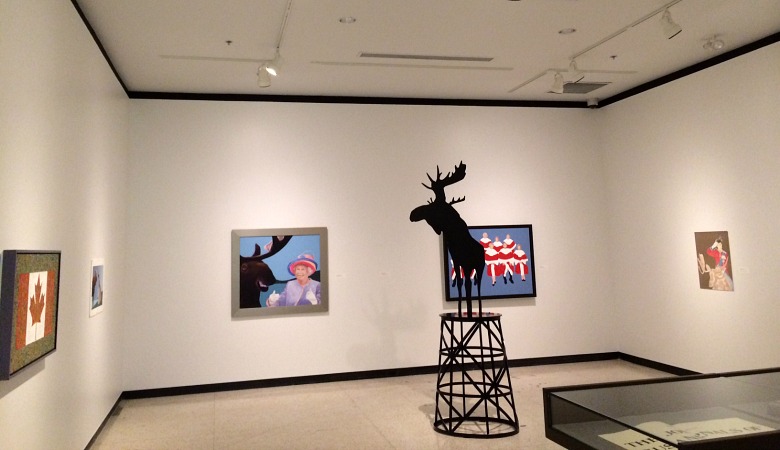 131114-charles-pachter-banner
Charles Pachter's indelible pop images are now on display at Enterprise Square Galleries, thanks to a generous gift by the artist to UAlberta's art collection.

(Edmonton) Charles Pachter, the Canadian artist who elevated the moose to Canadian icon status, has a saying: everything you do in life, whether you know it or not, is rehearsal for the next thing.

So when he met Carl Amrhein, the University of Alberta's provost, when Amrhein was the dean of the Faculty of Arts and Science at the University of Toronto a dozen years ago, Pachter would have had an inkling that their paths would cross again.

“He’s a great guy and I hadn’t seen him in years,” remembers Pachter, whose art channels everyday Canadian icons—wildlife, hockey players, Mounties, even the Queen—into stylized pop images. “Then he wrote to me two and a half years ago and asked me if I had any more moose sculptures, as the University of Alberta was interested in getting one. I guess I turned the moose into my Andy Warhol Canadian icon—and I happened to have another moose sculpture.

“He put me in touch with [museums] at the U of A, and the next thing we are talking about the possibility of something larger.”

The rehearsal for something larger is now a reality, thanks to a 14-piece art gift Pachter made to the U of A that is now on display at the Enterprise Square Galleries.

Pachter, 71, says at this stage of his life, which he playfully refers to as “the fourth quarter,” he has begun to think about his legacy.

“When you reach your last quarter you start to think about what to do with your important works and where should they be,” he said. “I’m really excited about having some of my finest stuff out in Alberta because that’s legacy stuff—it will be here as a permanent acquisition.”

And although Pachter’s only visit to Edmonton came in 1970—while visiting his childhood friend, muse and collaborator Margaret Atwood, who spent the 1969-70 academic year teaching in the U of A’s Department of English and Film Studies—his roots in Edmonton run deeper than most; it’s where his mother was born.

“I love the idea of getting my work out to a place where my mom was born before my grandparents moved back east during the First World War,” said Pachter. He also recalls a trip out west from Toronto in 1969 to take a teaching job in Calgary as being pivotal in his efforts to define salient qualities of the Canadian identity.

“For an artist to see the size of this country, it just blew me away; I couldn’t believe it.”

Now an officer of the Order of Canada, Pachter has beaten the odds and made it as a Canadian artist.

“I worked for nearly 50 years trying to probe the psyche of the nation,” he said. “I love the fact that I’m seen as a kind of Canadian artist laureate.”

Among the four paintings, nine graphics and the moose sculpture Pachter donated to the U of A are The Supremes, a major painting of the Supreme Court justices, which includes chief justice and U of A alumna Beverly McLachlin; Flagspatter, a Jackson Pollock-inspired interpretation of the Canadian flag; and a handmade folio of Atwood poems and his prints called The Journals of Susanna Moodie—widely thought to be the most important collaboration between a Canadian poet and a Canadian artist. “I only have four copies left of the original run of just 120—I wanted Edmonton to have one.”

Pachter himself will be at the downtown gallery this evening at 6 p.m. to deliver a free public lecture, “How to Survive and Thrive as a Contemporary Canadian Artist.” Topics included in Pachter’s presentation are his first moose, his mom, Atwood, the rough road for Canadian artists and the folly of Canadian high art critics.