Charting the growth of one of the world's oldest babies 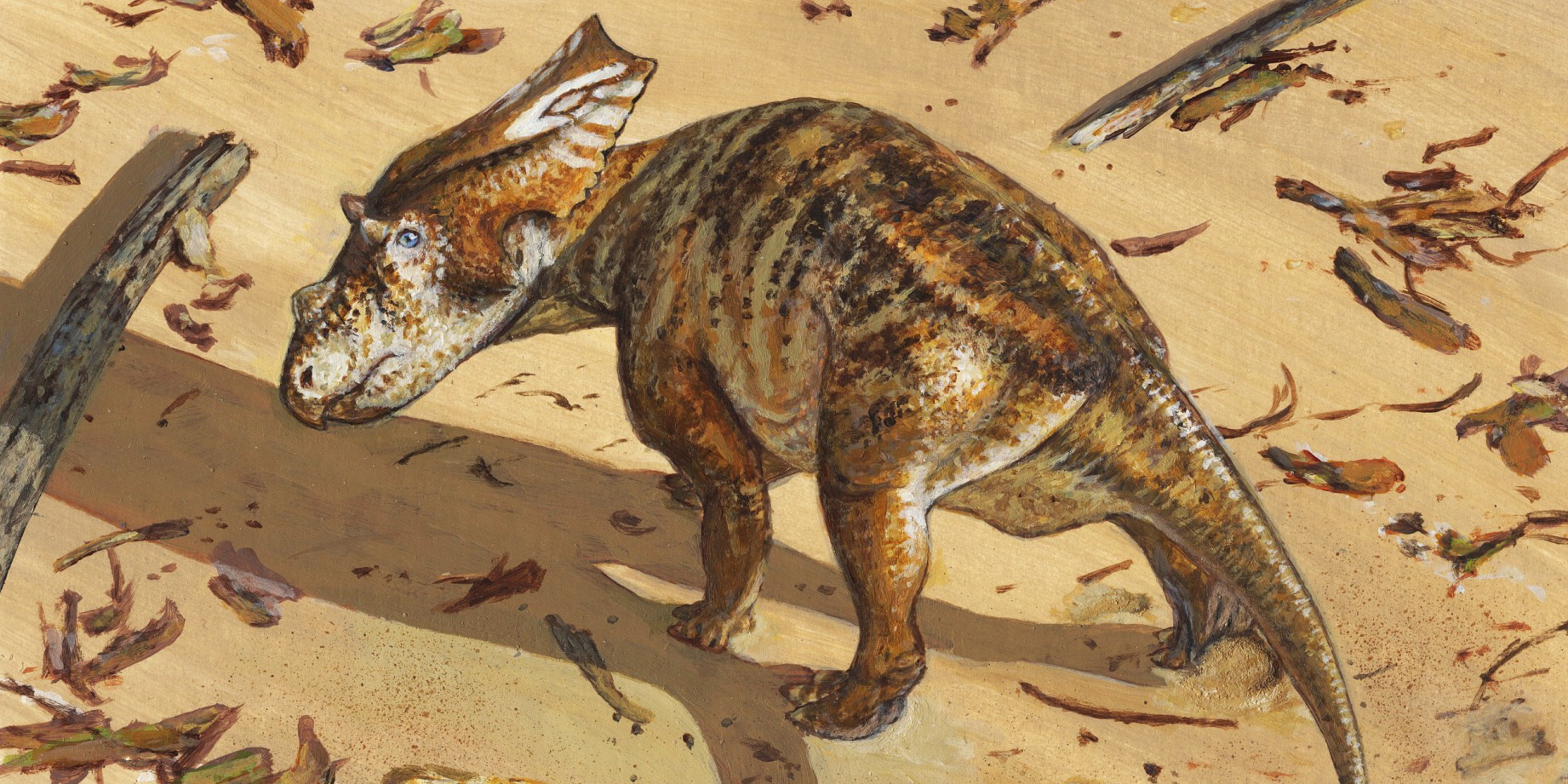 Life reconstruction of the baby chasmosaur, by artist Michael Skrepnick.

The discovery of a juvenile Chasmosaurus—one of the rarest dinosaur discoveries—made headlines around the world in late 2013. Professor Philip Currie from the University of Alberta and his colleagues have now published the results of their scientific findings in an alpha-level taxonomic description in the Journal of Vertebrate Paleontology.

“For the first time ever, we have a complete skeleton of a baby ceratopsid,” says Currie of the roughly 75-million-year-old dinosaur found in 2010 in Dinosaur Provincial Park in Alberta, Canada. “We’ve only had a few isolated bones before to give us an idea of what these animals should look like as youngsters, but we’ve never had anything to connect all the pieces. All you need is one specimen that ties them all together. Now we have it!”

Currie notes that the discovery allows for the refinement of previous findings and provides the opportunity to fill in gaps in the evolution of other horned dinosaurs, such as Triceratops.

“One of the greatest benefits is that we can now look at the different body proportions for Chasmosaurus as it grew up,” Currie explains. “We now have an anchor point with the baby that we can compare with all other specimens of this species, and from that comparison can calculate the dimensions, body weights and ages for all other ceratopsid species. We can start filling in missing pieces.”

Currie says this new publication holds incredible value not only for paleoecological studies, but also for understanding the life history, biomass, population structure, growth rates, variation and physiology of these animals. “Unless you’ve got that basic anatomical information, you’re kind of shooting in the dark with all of these other calculations.”

He says the biggest surprises came in the comparisons of shapes and relative proportions with adult Chasmosaurus. “There was no doubt in our minds that a baby would have had a much shorter frill relative to its skull length than an adult. But what we couldn’t see is that it also has a different shape. Now, with a full skull of a juvenile in which the bones actually articulate with each other, we can see that in Chasmosaurus, the back of the frill isn’t broad and squared off the same way that it is in an adult. In fact, the frill narrows towards the back. And instead of being flat on top from one side to the other, the frill is arched and has a ridge running down the middle of it,” says Currie. “It is very different than I expected.”

“Alberta has long been known as one of the centres for ceratopsian research,” says Michael Ryan, one of the world’s top ceratopsian dinosaur researchers and curator of vertebrate paleontology at the Cleveland Museum of Natural History. “The discovery and publication of the baby Chasmosaurus cements Alberta’s leadership in this area.” Ryan is also one of Currie’s former students.

“We still haven’t plumbed the depths of the anatomical description,” says Currie, noting that the specimen will provide scientists with unparalleled opportunities to study the growth, changes and variation of a single species. “Over the next few years, I will assign different parts of the body to different students who will then focus on growth changes and their implications within ceratopsids.”

Currie also has immediate plans to examine the brain case through advanced CT scanning in Japan. In fact, the baby will be on exhibit in Tokyo at the National Museum of Nature and Science later this year, the first opportunity anyone outside Alberta will have to see it. The baby dinosaur has previously been exhibited at Dinosaur Provincial Park and at the University of Alberta.

The findings, “A juvenile chasmosaurine ceratopsid (Dinosauria, Ornithischia) from the Dinosaur Park Formation, Alberta, Canada,” were published in the January 2016 edition of the Journal of Vertebrate Paleontology.

Charting the growth of one of the world's oldest babies