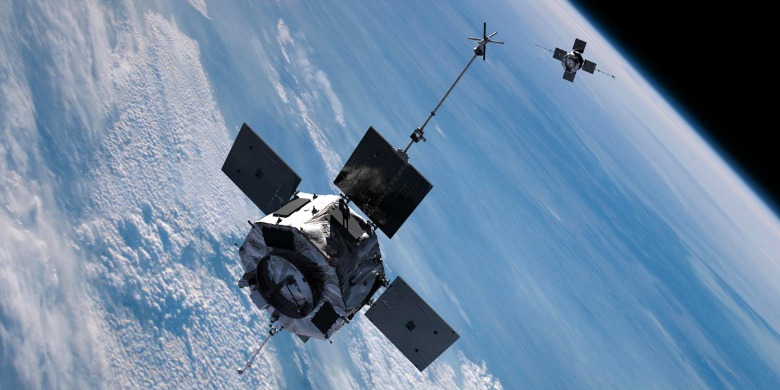 120830-mannstormorbiters-banner
Two new NASA satellites launched today will monitor space storm activity. U of A physics professor Ian Mann is one of NASA's co-investigators on the mission. (Image: NASA)

(Edmonton) There was probably no one looking forward to this morning with more anticipation than University of Alberta physics professor Ian Mann, when an Atlas rocket lifted a pair of NASA satellites into orbit from Cape Canaveral, Florida.

Mann was appointed a NASA co-investigator on the $700-million mission that will see two satellites monitor space radiation storms headed towards Earth.

Mann describes space radiation as highly energetic particles in a doughnut-shaped belt surrounding Earth. Periodic blasts of solar activity can whip the particles up to nearly the speed of light, and the resulting space storms can knock out communications satellites and endanger the health of astronauts. International Space Station personnel could be vulnerable when required to make spacewalks.

“The focus of this mission of discovery is to understand the mechanisms that generate space radiation, and eventually we hope to be able to predict them,” said Mann.

The NASA mission, named Radiation Belt Storm Probes, will send the two satellites into the Van Allen Belt, one of the most dangerous regions of outer space.

Mann has been connected to the mission since the planning stages. Throughout the two-year orbital mission, he will be meeting with other co-investigators and analyzing space storm data sent back to Earth.

“NASA is recognizing the U of A’s experience in space storm research,” said Mann.

This is not the first time Mann has been appointed a co-investigator on a NASA space storm project. In 2009, he led a team of U of A researchers in using ground-based monitors and satellites to pinpoint the impact epicentre of space storms as they crashed into Earth’s atmosphere.

Mann says the success of the new mission could influence future space exploration.

“In the future, manned expeditions to far-off planets like Mars will involve assembling space vehicles in the zero gravity of low Earth orbit,” said Mann. “To do that safely we’ll have to know just how dangerous space storms can be for people and how to predict when they’re coming our way.”