Cheaper and healthier: reducing diabetes and cholesterol with barley grains 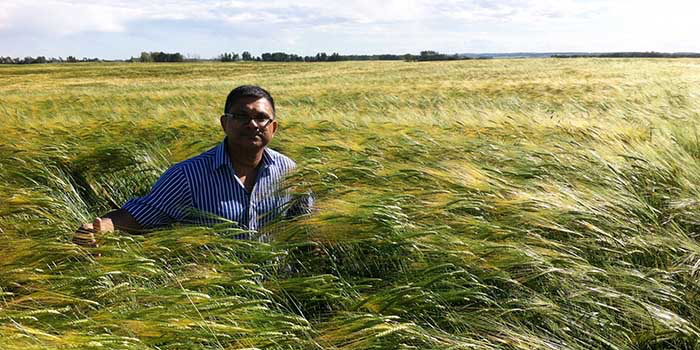 People with diabetes and high cholesterol could soon have a convenient and natural tool to manage their health now that an ALES researcher has commercialized a more cost-efficient way of getting beta glucan from barley grains.

The new product, called CerabetaTM, is a concentrated dietary fibre enriched in beta glucan. Since February, it’s been produced in a grain processing plant in Camrose, where automation methods are being perfected.

The product is currently sold as a bulk ingredient; plans are to sell it via Internet channels and in grocery stores next year, said Thava Vasanthan, a professor of grain science and technology in the Department of Agricultural, Food and Nutritional Science, who developed the new technology for fibre concentration.

Beta glucan is a soluble dietary fibre ingredient that exists in oat and barley grains. Scientists have long known that it is excellent for slowing rates of starch digestion and glucose absorption into the bloodstream, which is good for diabetics who can’t tolerate a glucose overload. It also traps bile acids produced from cholesterol and excretes them, so regular consumption of beta glucan brings down blood cholesterol levels.

In addition to helping manage diabetes and high cholesterol, the natural and gentle mechanism of beta glucan creates none of the side-effects that medical drugs can, said Vasanthan. These health benefits are already fully recognized and its health claims approved by the U.S. Food and Drug Administration, Health Canada and the European Food Safety Authority, he said.

The catch is, to reap those benefits three grams of beta glucan must be consumed per day.

“You’d have to eat three bowls of barley or oats on a daily basis, which is not pragmatic,” said Vasanthan. “In order to make the consumption of active dosage convenient, we have to concentrate beta glucan from grains.”

In 2002, Vasanthan and fellow ALES researcher Feral Temelli did just that. With a technology using water and alcohol mixture, they separated the beta glucan, which exists across the barley grain in concentrations of three to four per cent. The product they developed was available to be added to foods in concentrations of 40 to 50 per cent.

Unfortunately, at $30 to $35 per kilogram, the cost of production was too high for the food industry to seriously consider it as an economically viable food ingredient in their products.

Now, Vasanthan has perfected a new extraction method using air currents to separate the fibre from the grain, which substantially lowered the production cost. That makes it highly appealing to food producers who can easily add it to breads, breakfast cereals, nutrition bars, snack foods, smoothies and even yogurts.

Vasanthan’s new technology is being commercialized through a new company, GrainFrac Inc., which has the capacity to produce half a tonne of Cerabeta per day while creating test formulations for products made by potential customers from Canada, the U.S., Europe, India, Taiwan and China.

GrainFrac’s first consumer product will likely be a dining table ingredient that can be sprinkled over food of any ethnicity, said Vasanthan.

Eight million metric tonnes of barley are grown in Canada annually, making it our third most widely grown grain, after wheat and canola. While 75 per cent of it is used in animal feed and 15 per cent goes to malting and beer brewing, that leaves 10 per cent that could be more productively used by the food industry, said Vasanthan. GrainFrac’s intention is to create more value and utilization for Canadian barley in food applications, through investments and partnerships with Global Foods, makers of Alberta’s Sunny Boy Cereal, as well as Alberta Innovates Bio Solutions and Canadian Food Innovators.

“In the midst of an alarming growth in heart disease and diabetes across the world, new products such as Cerabeta would definitely play a role in alleviating the impact of these ailments,” said Vasanthan.