Research shows that not wearing a sling can speed up a patient’s return to mobility. 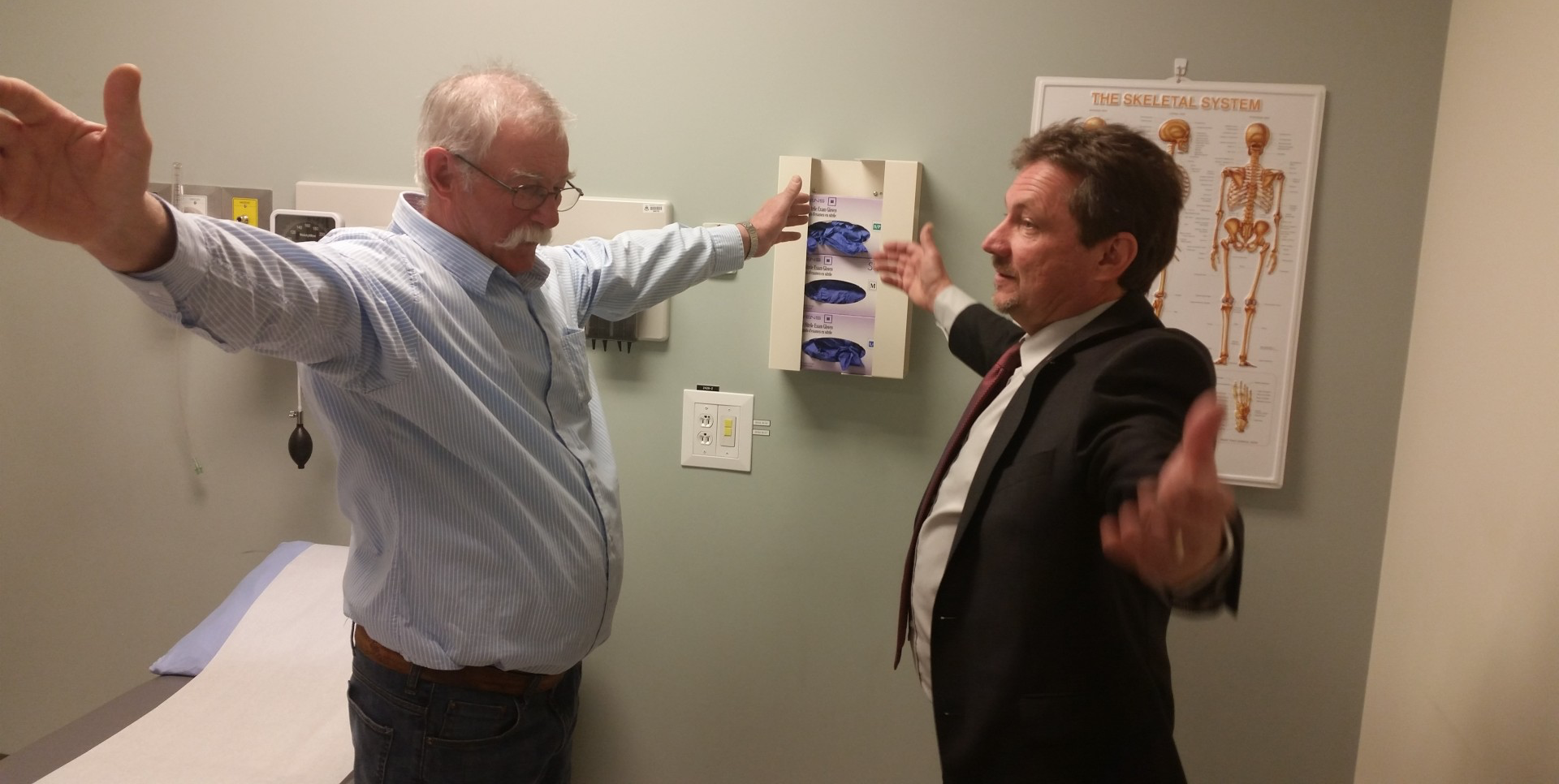 A randomized control trial led by two Faculty of Medicine & Dentistry members has shown benefits to getting patients moving earlier after surgery to repair the rotator cuff—the group of muscles and tendons that move and stabilize the shoulder joint. Robert Balyk and David Sheps, both assistant clinical professors in the Division of Orthopaedic Surgery, are co-authors of the study published in The Bone and Joint Journal.

The study compared outcomes following mini-open rotator cuff repair—a procedure that involves using an arthroscope to confirm the presence and reparability of a rotator cuff tear. The surgeon then removes the arthroscope and splits the deltoid muscle through a small incision to repair the tear. Rotator cuff tears become more common in patients over 40 years of age, and most patients who undergo surgery are between 45 and 65.

Conventional rehabilitation following a mini-open rotator cuff repair requires immobilization in a sling, preventing active motion of the shoulder for four to six weeks. However, Balyk often observed that the “cheaters”—those who didn’t wear their slings as instructed—had better quality of life and improved range of motion earlier than patients who strictly wore their slings.

“The anecdotal benefits of early active motion led us to question whether strict immobilization was truly required,” says Balyk, who is also chief of orthopedics at the Grey Nuns Community Hospital in Edmonton. “We know these patients are happier if they can move their shoulders sooner, because it allows for an earlier return to daily activities. However, we did not know if early mobilization would lead to any long-term complications, such as slower healing or a greater number of re-tears.”

In total, 189 patients with rotator cuff tears who underwent the procedure at the Grey Nuns or at St. Albert’s Sturgeon Community Hospital were recruited by the seven shoulder surgeons who contributed to the study. Patients were then randomized by the surgeon in the operating room to either early mobilization or standard rehabilitation. Progress was assessed at six weeks post-operatively, with additional followups at three, six, 12 and 24 months.

At the six-week assessment, patients who began early active motion showed significantly better range of motion than those who wore their slings the whole time. That difference disappeared at the three-month assessment, as the group who wore their slings caught up to the early mobilization group. No differences between groups were seen at six or 12 months, and by 24 months the final outcomes were the same in both groups. Early mobilization showed no differences in healing or re-tear rates, addressing the main concern about potential long-term complications.

“The obvious benefit to early mobilization is that patients can return to activities of daily living and work more quickly,” says Sheps, who is also facility medical director at the Sturgeon Hospital and holds an MBA in health-care administration. “This can also have an economic impact, as patients who undergo rotator cuff surgery are often of working age, and early mobilization may mean an earlier return to productivity.”

One study participant who can speak to the rehab benefits of early activity is Douglas Gilroyed, a retiree with a very active lifestyle on his acreage near Westlock.

“I wore the sling home and after that I never wore it,” says the 69-year-old, who had rotator cuff repair surgery on both shoulders. “I keep pretty active. We had lots of work here last year. We put up the fence. Built a shop. I ride horses and look after them. I just finished renovating my bathroom and kitchen. You’ve got to keep busy.”

The research has already garnered a great deal of interest in Canada and internationally. At the annual meeting of the American Academy of Orthopedic Surgeons in 2015 in Las Vegas, it was chosen from hundreds of studies as one of 15 papers most likely to change clinical practice in the next two to three years. A second phase of research is now underway with patients who receive purely arthroscopic rotator cuff repairs, as opposed to the mini-open (small-incision) procedure.

“Rotator cuff disease is very common to the population in general,” adds Marty Bouliane, study co-author and assistant clinical professor in the Faculty of Medicine & Dentistry. “Half of people 70 or older will have a rotator cuff tear.”

Tears can occur as a result of aging, genetics, activity and injury—and many people will have no pain or symptoms at all. Typically, physiotherapy is prescribed to manage the condition. But if rehab fails and pain persists, or in cases of sudden traumatic injury, surgery is performed.