Chris Hadfield to share advice for success on Earth, set against ‘harrowing tales of space flight’ 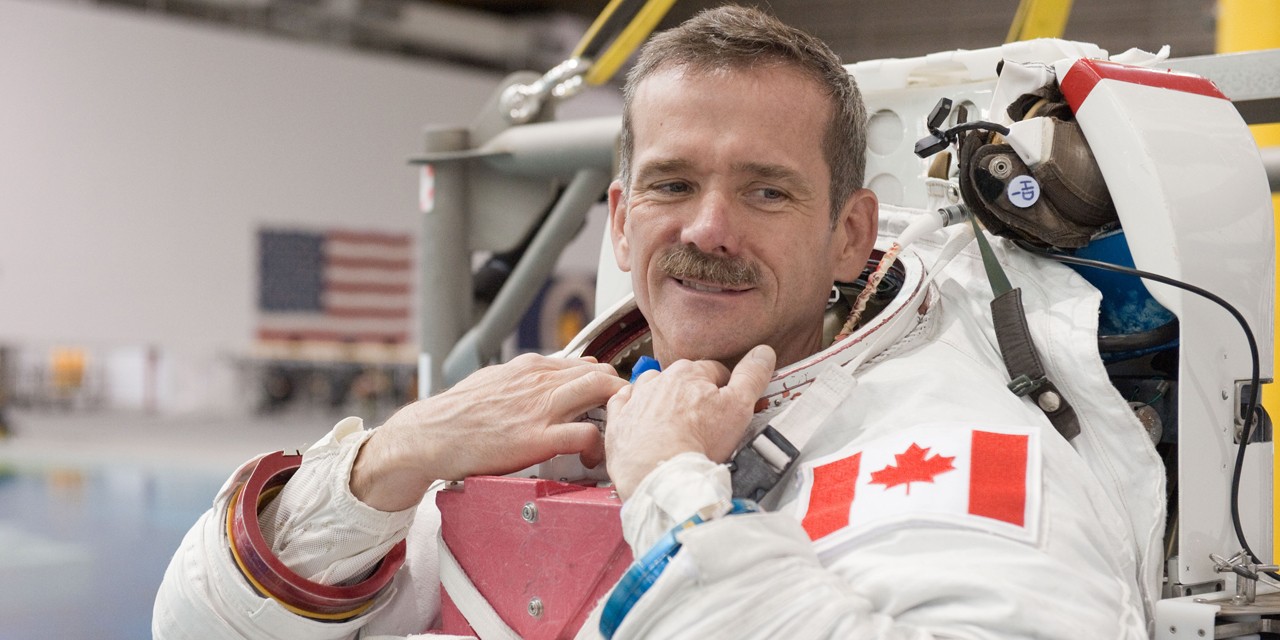 Chris Hadfield will be speaking at the U of A Oct. 1 to celebrate World Space Week. (Photo courtesy NASA)

Perhaps the most surprising thing to learn about Chris Hadfield is that he’s afraid of heights. This is a guy who has floated in space while helping install Canadarm2 on the International Space Station (ISS) and deliberately thrown powerful fighter jets into a wild, end-over-end tumble as a test pilot, just to figure out how to regain control.

But Hadfield never once let an inconvenient phobia prevent him from chasing his dream. He knew he wanted to be an astronaut at nine years old, the moment he saw the Apollo mission land on the moon, and with single-minded determination, eventually made it happen in landmark fashion as the first Canadian to walk in space in 2001, and the first Canadian to command the ISS in 2013.

Hadfield was an astronaut for 21 years, retiring from the Canadian Space Agency in July 2013. During his illustrious career he travelled to space three times, most recently for a five-month stay on ISS. He also served as NASA's director of operations in Russia between 2000-2003.

"I think a fear of heights is good; it's healthy self-preservation,” said Hadfield, adding it’s also important to realize that “things aren't scary—people are scared.” In other words, there is a world of difference between danger and fear.

“Really, the beauty of life is in mastering something that otherwise might terrify you,” he said. “Sure, you have to respect your intuitive, innate fears, but not let them dictate your life, otherwise you'll never ride a bike, get married, drive a car or fly a spaceship. You need to find a way to overcome those fears or you'll spend your whole life shivering in a corner.”

Words to live by from someone who has soared to heights most of us can only imagine. It’s just one of the many pearls of wisdom Hadfield plans to share during his visit to the U of A Oct. 1 to celebrate World Space Week. His public talk will focus on STEM education (science, technology, engineering, and mathematics) and tools and ideas for personal growth and achievement in learning.

In addition to relating practical advice for success, set against “harrowing tales of flying in space,” he will also meet with students, including the AlbertaSat undergraduates in the faculties of Science and Engineering who designed the Ex-Alta 1 cube satellite.

Launched from the ISS last May to measure space weather, the satellite is an inspiring example of a project that can change of the lives of participants, said Hadfield.

“To be involved in a project like that—where you can take ownership of it and see it through end to end—suddenly you're part of something that is well beyond anything you thought you would be involved with,” he said.

“Once you've pushed a person's horizons further back, they will never again shrink. So I think it's really smart of the U of A and organizations that support the satellite, because of the change in the students' self perception."

Beyond that, monitoring space weather is crucial for understanding the electromagnetic environment surrounding all of us, he said. “Living with a star is dangerous, and the more we understand it, the better off we're going to be," especially when it comes to predicting solar storms.

Hadfield’s accomplishments in space, and his enormous contribution to the international space program, speak for themselves. But Hadfield is also celebrated as a gifted communicator. Throughout his career he has spoken regularly to students of all ages.

During his long-duration stay aboard ISS in 2013, he took pictures of Earth and shared them on social media. He also conversed with William Shatner of Star Trek fame on Twitter, and recorded and shared the first song in space called Jewel in the Night, co-written with Ed Robertson of the Barenaked Ladies. His version of David Bowie’s Space Oddity, shot in space, went viral with more than 37 million views on YouTube.

Hadfield has written three books to date, most recently a picture book for children called The Darkest Dark. His current speaking tour is just one example of what he sees as a sacred responsibility to share what he has been so privileged to learn.

"My life provides a very different perspective than most people have and gives me a chance to talk about ideas, horizons and opportunity,” he said. “Just how is it you can do these things in life, how do you mold and change who you are to put yourself in a position where some of these things can happen?

“Take a student at U of A—or anyone else who comes to the talk—what choices do they make on a recurring basis in order to get closer to the things they're dreaming of?”

Helping people answer that question so they’re better able to reach their own heights has become Hadfield’s latest mission. And since he takes his guitar everywhere he goes, there’s always music involved.

And just what does it feel like to play and sing in zero gravity?

"The normal cues you developed on Earth are gone,” he said. “The way you breathe is different, the way your blood flows is different—the fluid can't drain out of your head without gravity. Your sinuses are constantly full, your tongue is swollen, and your muscle memory for guitar is all wrong.

“If you want to know what it feels like, put your guitar next to the wall, stand on your head for at least two hours until you truly get a lot of physiological changes happening in your body. While upside down, reach for the guitar and try to play and sing—that's what it feels like.

“But hey, after a while you can do anything.”

Chris Hadfield to share advice for success on Earth, set against ‘harrowing tales of space flight’