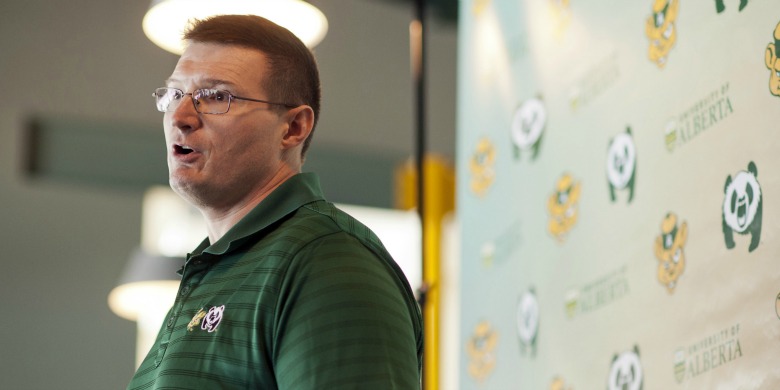 (Edmonton) Three-time Grey Cup champion and University of Alberta alumnus Chris Morris has been chosen to turn around the Golden Bears football program.

Morris, originally from Scarborough, Ont., takes over a program that hasn’t won a Canada West conference title since 1981, and has missed the playoffs in seven of the past 12 seasons while putting together a record of 38-58 (.395), including 0-8 in 2012.

“Sometimes people overcomplicate success, but what I’ve found, in every phase of my life, is that success comes down to outworking the people you’re in competition with,” said Morris. “If this program is going to become the top program in CIS, then as the head coach of this program, I have to outwork every other CIS head coach.”

Morris began his football and post-secondary education paths at the University of Toronto where he received a bachelor of physical and health education (1995), was twice named a CIS all-Canadian and won the J.P. Metras Trophy as the country’s most outstanding down lineman in the country in 1990. Morris played in the East-West Shrine Bowl, normally reserved as a showcase for American university standouts, before getting drafted eighth overall in the 1992 Canadian Football League draft by the Edmonton Eskimos.

Morris made the team as a starter that year and would go on to play 237 games over 15 seasons for the Eskimos, playing in five Grey Cup games and winning three (1993, 2003 and 2005). In 2008, Morris was given a plaque on the Eskimos’ Wall of Honour in Commonwealth Stadium.

Morris continued with his education, returning to the U of A where he received a bachelor of education degree in 1997. That same year, while still playing in the CFL, Morris began his career as an educator within Edmonton Public Schools. He ascended to principal of Spruce Avenue Junior High in 2009, where he turned around the school’s historical Provincial Achievement Test success rate from 50 per cent to close to 90 per cent, the highest in the history of the school. Morris has also been extremely active with Edmonton and area charities and communities, including the Make-A-Wish Foundation, Ronald McDonald House and the Cystic Fibrosis Foundation, since his arrival in 1992.

He has also served as the offensive co-ordinator of the Harry Ainlay Titans football program, helping the Titans to three city championships, two Northern championships and one provincial championship title over the past four seasons.

“One of the most appealing parts of this job is the fact that you’re in one of the very limited and select seats in the province that gets to shepherd football,” he said.

“The University of Alberta Golden Bears football team cannot be successful unless the other amateur football organizations in the province and the Edmonton Eskimos are all at the table in a co-ordinated effort to develop football in Edmonton.

“There are very few jobs that present the kind of opportunity this job presents, but can you imagine how it could be if all those parts came together, for the good of football in Edmonton, and started moving in the same direction?”