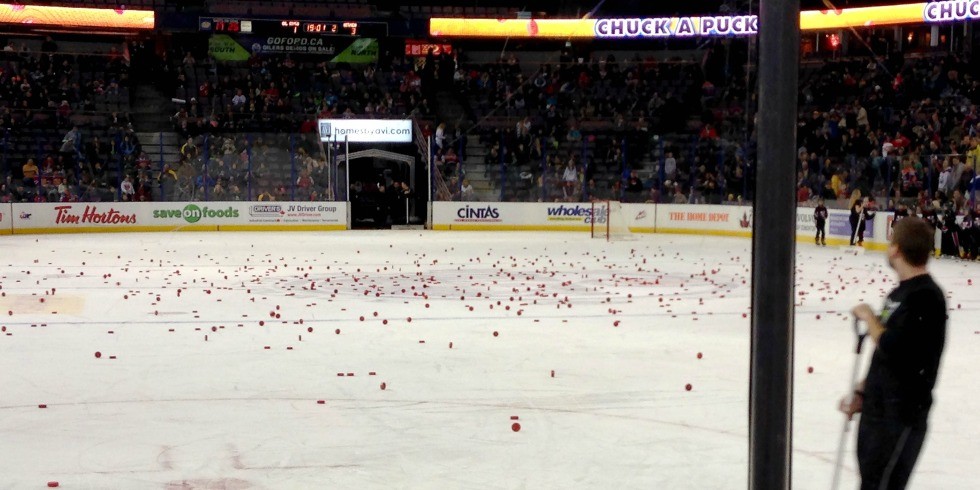 Proceeds from Chuck-a-Puck at the Oct. 15 Edmonton Oil Kings game will go to UAlberta's Institute for Stuttering Research and Treatment. (Photo: Rotary Club of Edmonton Northeast)

(Edmonton) A small group of volunteers wants to unleash a hailstorm of orange hockey pucks at Rexall Place—all in the name of advancing stuttering treatment and research at the University of Alberta.

The fledgling volunteer group, working under the name Friends of ISTAR, is partnering with the Edmonton Oil Kings and the Sherwood Park Elks to hold Chuck-a-Puck at the Oil Kings game on Oct. 15. Proceeds from Chuck-a-Puck—which sees fans hurl foam pucks on the ice during intermission—will go toward the U of A’s Institute for Stuttering Treatment and Research (ISTAR).

“Friends of ISTAR is really a way for former ISTAR clients and their families to continue to stay involved and engaged, and help raise awareness and dollars for ISTAR,” said Friends of ISTAR organizer Gordon McLeod. “Chuck-a-Puck seemed like a great first event for us to try and do the most amount of good we can, even with a small group.”

McLeod knows of ISTAR’s work through his membership with the Sherwood Park Elks; Elks and Royal Purple are longtime champions of ISTAR. Friends of ISTAR is still in its early days, but so far the grassroots group has rounded up about half a dozen volunteers who hope to give back through events like Chuck-a-Puck.

April Flynn couldn’t wait to help out and reconnect with ISTAR after volunteering for the institute during her undergraduate days at the U of A.

“The thought of doing volunteer work that can actually help people is really, really important,” said Flynn, a self-described social person who “talks a lot.”

“The ability to speak is so important to me, and ISTAR helps people say what they’re thinking, which is very powerful.”

Friends of ISTAR volunteers are selling $20 game tickets for the Oct. 15 matchup between the Oil Kings and the visiting Victoria Royals, with a portion of proceeds going to ISTAR. Volunteers will also be on hand during the game to sell foam pucks—two for $5 or five for $10—that fans will later throw on the ice during the second intermission. Whoever chucks a puck closest to centre ice wins a $250 prize.

“It’s a simple and easy way with a limited amount of volunteers to get involved,” said McLeod. “We’re very grateful to the Edmonton Oil Kings for making this fundraiser possible.”

Deryk Beal, executive director of ISTAR, praised the efforts of the volunteers, Elks and Royal Purple, and the Oil Kings franchise for making the partnership possible.

“This might be a small group of volunteers in terms of numbers, but their enthusiasm and dedication to supporting ISTAR speaks volumes about their passion,” said Beal, an assistant professor of speech-language pathology with the Faculty of Rehabilitation Medicine.

Chuck-a-Puck will be held a week before International Stuttering Awareness Day (Oct. 22), which is an important time to raise awareness about ISTAR’s 28 years in developing effective treatment outcomes for stuttering, Beal said.

“Every effort like this one allows ISTAR to help more people take control of their speech and improve their confidence.”