Health scientists receive $25.9M to bring life-saving technology from the future to the present. 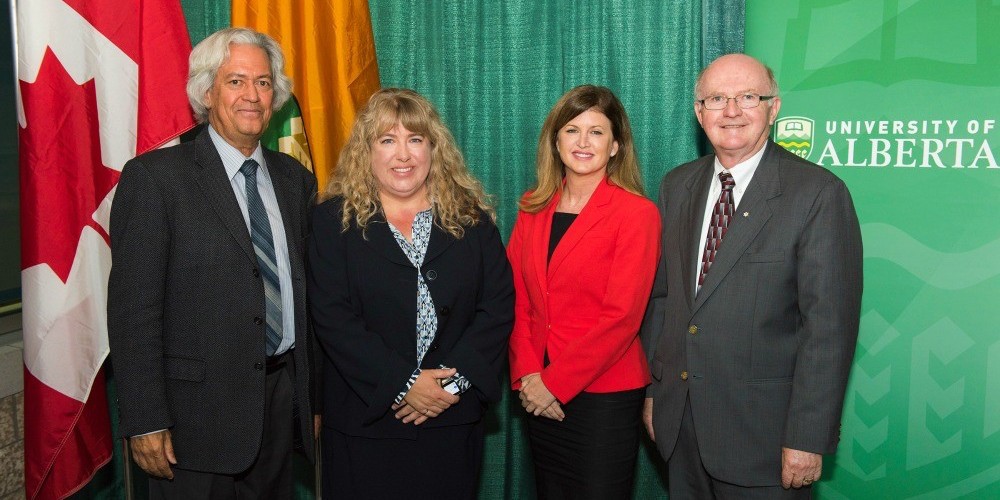 (Edmonton) While visiting campus to announce the federal government’s $25.9-million investment in 42 University of Alberta health research projects, minister of health and U of A alumna Rona Ambrose was given a glimpse into a world that, just a few decades ago, was strictly the stuff of futurists and pulp-fiction writers.

“Just as impressive as the amount of funding are the types of research projects being supported here,” said Ambrose, who spent the first part of her morning talking cryopreservation—the biology of living things at low temperatures—with thermodynamics engineering researcher Janet Elliott and cryobiologist Locksley McGann.

“Their research on the preservation of cells and tissues for use in transplantation and surgical procedures is absolutely fascinating,” said Ambrose. “It’s really like listening to science fiction, but it’s arrived. It’s not fiction anymore.”

Ambrose noted that the ability to preserve cells and tissues in such a way holds tremendous potential for people with many health challenges, especially the 4,500 Canadians currently waiting for a transplant.

McGann, professor emeritus in the Department of Laboratory Medicine and Pathology and Canada’s only fellow in the Society for Cryobiology, said biologists rely on cryopreserved samples for their research, and many types of surgeries, such as pediatric heart valve transplants, require cryopreserved tissue—and many more would be more successful if cryotransplantation were a viable option.

“Until recently, the inability to cryopreserve cartilage, the smooth substance that covers the ends of bones at joints, has meant a long wait list for patients in Canada to receive a human cartilage transplant,” he said.

Hope for cartilage transplant patients comes thanks to advances in both surgical techniques and tissue preservation. Orthopedic surgeon Nadr Jomha recently performed the U of A’s first ever partial knee transplant using fresh cartilage, and a tireless 15-year collaboration involving dozens of researchers and students has resulted in the first protocol for cryopreserving intact knee articular cartilage.

“We anticipate that the University of Alberta will be home to the world’s first cryopreserved articular cartilage transplant program,” said Elliott, professor and Canada Research Chair in Thermodynamics in the Department of Chemical and Materials Engineering and adjunct professor in the Department of Laboratory Medicine and Pathology, who talked of the collaborative spirit involved in the science of low temperatures.

“What is cool about cryobiology is engineering students are working together with biologists and medical researchers in the same lab environment,” she said. “The engineers are learning to culture cells and do biological experiments, and the biologists are learning to solve differential equations.”

Elliott added the end result is a long list of discoveries, an undeniable impact and a reputation as one of the best such programs in the world.

“Our students have won best paper awards at the international Society for Cryobiology annual meetings more times than any other research group, and our thermodynamics equations are recognized around the world,” she said. “I think what makes our research so powerful is we use those equations iteratively with biological experiments while keeping in mind the medical application, and it’s happening all in one place.”

McGann, whose research has been funded by iterations of the Canadian Institutes of Health Research (CIHR) since his days as a grad student in 1969, and Elliott, who has had similar support for her 17 years at the U of A, said direct outcomes of their research have resulted in the Stem Cell Transplant Program operated by Canadian Blood Services and the Comprehensive Tissue Centre operated by Alberta Health Services.

Elliott adds that the 2014 CIHR Open Operating Grant of more than $604,000 will allow the research team, which includes materials engineering researcher John Nychka and biomedical engineering researcher Richard Thompson as co-investigators, to apply the knowledge they’ve learned in cryopreserving articular cartilage to making progress on the new challenge of cryopreserving corneas. “This would reduce the amount of time Canadians wait for a cornea transplant to restore their vision.”

Lorne Babiuk, U of A vice-president (research), applauded the federal government for its ongoing commitment to U of A health researchers.

“By investing in researchers, the CIHR has strengthened the Canadian health research community, inspired new investigator-led research programs and forged many interdisciplinary relations across various fields,” he said. “This type of collaborative research will ensure researchers are effectively able to translate knowledge into improvement in patient care, thereby improving the lives of patients.”