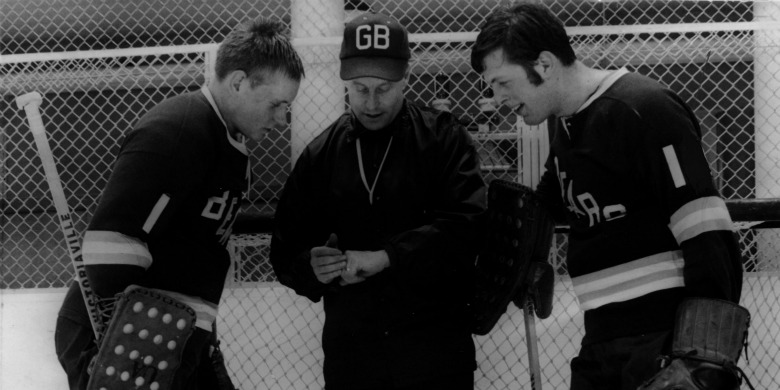 140129-clare-drake-banner
Clare Drake's appointment to the Order of Canada is the latest honour for the legendary U of A hockey coach.

(Edmonton) Clare Drake, legendary University of Alberta Golden Bears men’s hockey coach and the most successful coach in the history of Canadian university hockey, has been appointed as a member of the Order of Canada.

Drake, famously known as the dean of intercollegiate hockey coaches, led the Golden Bears hockey team to six national championships and 697 wins between 1958 and 1989. He was named Canadian Inter-university Athletic Union Coach of the Year twice and Canada West Coach of the Year four times. On June 1, 1990, the U of A dedicated Varsity Arena to him and renamed it the Clare Drake Arena.

Drake, who won a record 17 Canada West conference titles, also coached football for a short time in the 1960s, leading both the hockey and football teams to national titles during the 1967-68 academic year.

A co-coach of Canada’s 1980 Olympic hockey team, he coached gold-medal teams at the World Student Games and at the Spengler Cup tournament. Drake took a leave of absence from the university in 1975 and 1976 to take the reins as head coach of the Edmonton Oilers, then part of the World Hockey Association. In 1989–90, Drake served as an assistant coach for the National Hockey League Winnipeg Jets. More recently he was a technical advisor to the University of Alberta Pandas women’s hockey team during the 1997–98 and 1998–99 seasons—the team’s first two years in existence—under current head coach Howie Draper. Drake also worked with the Dallas Stars during the 2001 Stanley Cup playoffs.

Throughout his career, Drake has provided enlightened leadership to hockey coaching development, and his writing contributed substantially to the theoretical background of the renowned Canadian Coaching Certification Program. A gifted teacher, he has conducted coaching workshops and hockey clinics around the world.

His numerous coaching honours include the 3M Gordon Juckes Award from Hockey Canada and the Geoff Gowan Award from the Canadian Coaching Association, which is the top honour for any coach in any sport. He is a member of the U of A, UBC, Edmonton, Alberta and Canada Sports Halls of Fame and is an honourary life member of the Alberta Football Coaches Association.

He has also received an honorary doctor of laws degree from the U of A, the school’s Distinguished Alumni Award, the Alberta Centennial Medal and the Alberta Order of Excellence.