Clare Drake to be celebrated at Bears hockey dinner 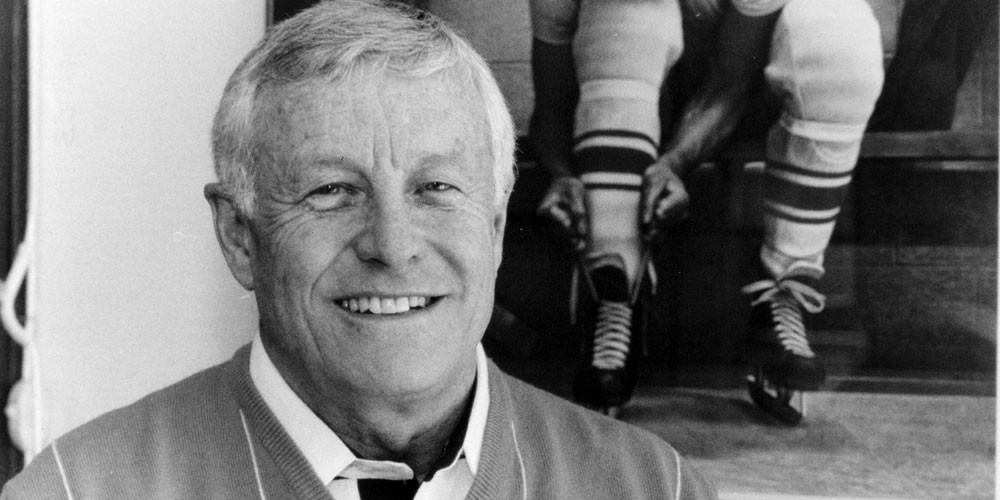 (Edmonton) Clare Drake, the man who revolutionized coaching the game of hockey, will be the guest of honour at the third annual University of Alberta Golden Bears Dinner on Saturday, June 13, at Characters restaurant in downtown Edmonton.

Drake, who was born in Yorkton, Saskatchewan, but has lived and worked in Edmonton since the late 1950s, has Canadian university national championship rings on eight of his fingers, as well as an unsurpassed record of 697-296-37, for a career .695 winning percentage. He’s a member of the Order of Canada, and received the Hockey Canada Order of Hockey in Canada Award alongside Steve Yzerman and France St. Louis in 2014.

He coached, mentored and developed hockey at various levels in Canada, including with the Edmonton Oilers (of the Western Hockey Association), the NHL’s Winnipeg Jets and Dallas Stars, and the Canadian men’s and women’s national teams. He has influenced countless coaches, players and modern coaching disciplines at all levels of the sport as well. He wrote numerous research articles on the technical aspects of hockey, lent his expertise to a variety of educational hockey films and videos, and provided enlightened leadership to Hockey Canada’s coach education initiatives. His writings formed the basis of hockey’s first national coaching certification program, and he then helped deliver it through innumerable clinics and conferences throughout North America, Europe, Asia and Australia. He also developed the National Coach Mentorship Program, and is revered as the “dean” of hockey coaches, and as the “coaches’ coach.”

Drake also served as the co-coach of Canada’s 1980 Olympic hockey team, and coached gold medal teams at the 1981 Winter Universiade and the 1984 Spengler Cup tournament, which was Canada’s first ever gold medal at the Spengler Cup. He was an assistant coach with the Winnipeg Jets in 1989-90, and worked with the Dallas Stars during the 2001 Stanley Cup playoffs. He also served as mentor coach for Canada’s national women’s team leading up to the 1998 Olympic Winter Games.

He twice was honoured as the Canadian university coach of the year, and won the Canada West conference coach of the year award four times. His list of coaching awards also includes the CIS Jean-Marie De Koninck Coaching Excellence Award, the 3M Gordon Juckes Award from Hockey Canada and the Geoff Gowan Award from the Coaching Association of Canada.

Drake was also a gifted educator who served as a professor in the Faculty of Physical Education at the U of A for many years, and previously taught at Strathcona High School. He holds an honorary doctor of laws degree from the U of A, as well as the U of A’s Distinguished Alumni Award, the Alberta Centennial Medal and the Alberta Order of Excellence. He is a member of the U of A, UBC, Edmonton, Alberta and Canadian sports halls of fame and is an honorary member for life of the Alberta Football Coaches Association.

Upon his retirement in 1989, the University of Alberta dedicated Varsity Arena to Drake and renamed it Clare Drake Arena in 1990.

“This event is the Golden Bears program and alumni’s way of thanking Coach Drake for instilling his core values on every person who was ever connected to the program,” said Marple, who played 137 games as a Golden Bear between 1990 and 1994. “Through his teaching on the ice, the field, or in the classroom he taught us the importance of a team-first mentality, having an excellent work ethic and always having a positive attitude towards our teammates and coaching staff. These values not only resonated deeply with us in school, in our sports but perhaps more importantly, into our personal and professional lives after graduation. There is no doubt that his values and innovative style of coaching over a 28-year career with the Golden Bears laid the foundation for the program to become the most successful university hockey program in North America.”

The dinner comes on the heels of the Golden Bears hockey program winning its second straight CIS championship, and the program’s 15th title in team history, which is a Canadian university record.

Tickets for the event are $150 each, and include a three-course meal and a copy of the book Clare Drake, The Coaches’  Coach: Hockey’s Quiet Revolutionary. The evening will also include a silent auction and a showing of a commemorative video compiled by the Golden Bears hockey alumni. The Golden Bears hockey program is also selling official team jerseys, which can be customized, for $175.

You can purchase tickets and jerseys online, or contact Golden Bears hockey general manager Stan Marple at 780-974-3945 or stan.marple@ualberta.ca.

Clare Drake to be celebrated at Bears hockey dinner
Newsroom