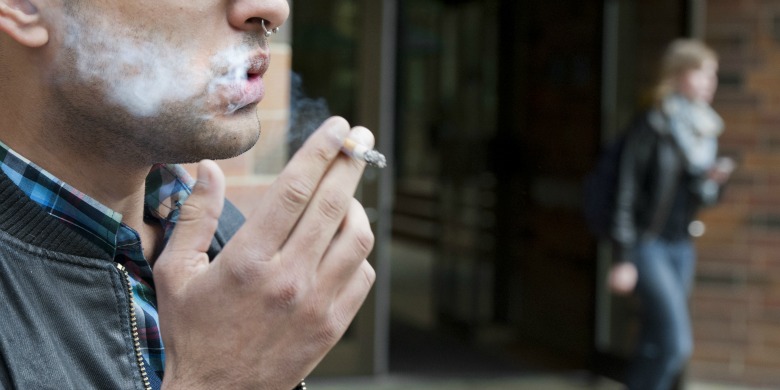 121001-campussmoking-banner
A new study by UAlberta researchers shows that smoking bans on Canadian university campuses have had a history of gradual acceptance, but have had mixed results. (Photo: John Ulan)

(Edmonton) University of Alberta researchers who looked back at 40 years of cigarette smoking bans at Canadian university campuses have found a history of acceptance, one failure—and smoking “trolls.”

The researchers looked at smoking restrictions put in place between 1970 and 2010 at the U of A, Lakehead University in Ontario and Dalhousie University in Halifax.

Of the three universities, the U of A is the only one today that does not have either a total campus-wide ban or designated smoking areas.

As with Lakehead and Dalhousie, there is no smoking allowed inside any building on the U of A campus, but outdoors, the university relies on a provincial law that bans smoking within five metres of doorways.

Damian Collins, a professor of human geography at the U of A and co-author of the study, says over the 40-year study period, smoking bans at all three universities started with lecture halls and labs.

“I don’t think anybody wants to return to the ‘70s, when the professor at the front of the lecture theatre was smoking a pipe and the students’ desks were equipped with ashtrays,” said Collins.

Since that time, smoking bans have spread across campuses to all indoor locations, including residences and pubs, and finally to the great outdoors. But in 2012, only one university in the study, Dalhousie, has a total campus-wide smoking ban.

Lakehead University tried a campus-wide smoking ban using its physical layout: a ring road surrounding the campus became a border beyond which people could smoke. Collins explained that enforcing the ban was difficult because it required smokers to walk the distance to the ring road.

“It just took too long for people, like university employees on a 15-minute break, to get from the centre of campus to the ring road for a smoke,” said Collins.

The other problem for Lakehead was winter in Thunder Bay, Ont. “Because winters are so cold, smokers would find hiding places and the university was concerned about safety,” said Collins. “The people who took shelter under bridges or behind trees were referred to as smoking trolls.” Lakehead has since moved to designated smoking areas in wide-open parking lots on its campus.

Collins says there’s evidence that bans on cigarette smoking are good for university students. “Taking up smoking has been a traditional response for young people at university, away from parental and teacher control for the first time in their lives,” said Collins. “Campus bans help to prevent them from taking up the habit, and can encourage existing smokers to quit.”

The research by Collins and Amy Procter-Scherdtel of the U of A’s Department of Earth and Atmospheric Sciences was published in the journal Health and Social Care in the Community.