Climate change, disturbed forests not all bad news for bears 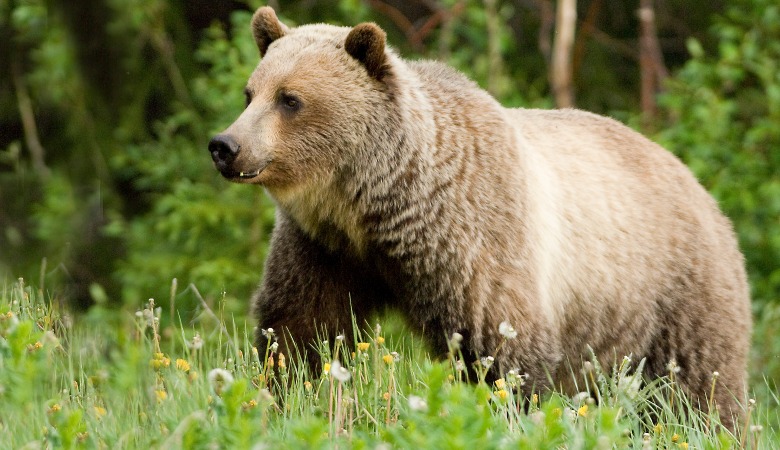 131029-grizzly-banner
Grizzly bears in Alberta may be gaining time to fatten up before hibernating because of earlier spring temperatures and easier access to food, according to a UAlberta study. The findings could help with habitat planning for the threatened bears. (Photo: Emily Court)

(Edmonton) Global warming and forest disturbances may have a silver lining for Alberta’s small population of grizzly bears.

In a 10-year study that monitored 112 bears in Alberta’s Rocky Mountain region, University of Alberta biologist Scott Nielsen and his colleagues found that warmer temperatures and easier access to food associated with forest disturbances helped the grizzlies to build more body fat, known to increase the chances of successful reproduction for mothers.

The resulting “silver spoon effect” shows that bears born into these favourable conditions have a head start in life, said Nielsen, an assistant professor in the U of A’s Department of Renewable Resources.

The findings, published in BMC Ecology, may help influence forest harvest designs to enhance habitat for the Alberta grizzly, which is classed by the Alberta government as a threatened species. Currently there are only about 750 of the bears in the province, half of them adults.

“Understanding variations in body size helps us understand what limits grizzly populations,” Nielsen said. “We get clues about the environments that most suit grizzlies by examining basic health measures such as body size. A simple rule is, the fatter the bear, the better. Certain environments promote fatter bears.

“Those who are born into rich environments do well. Our research shows that not only does it matter where the bear lives, but it also matters when it was born,” Nielsen said.

In years when warmer temperatures and less late-winter snow brought on earlier spring conditions, the body size of bears as adults was larger. Smaller bears were found in colder and less productive environments, or in years that were abnormally cool.

“We hypothesize that warmer temperatures in this ecosystem, especially during late winter and spring, may not be such a bad thing for grizzlies,” Nielsen said, noting that historically the range for the bears once extended as far south as Mexico and persists today even in the deserts of Mongolia. “That suggests the species won’t likely be limited by rising temperatures, which would lengthen the growing season and the time needed to fatten prior to hibernation.”

“The diversity of stand ages in the landscape has a positive influence on body condition because bears are better able to access a wide range of food sources like roots, green plants, berries, insects and moose, which all have different responses to forest disturbances. The best way to maintain that diversity in food resources is to maintain a diversity of stand ages, from recently disturbed forests to old growth.”

But although Alberta grizzlies seem to fall on the winning side of climate change in this case, survival rates need to improve, which requires “controlling and decommissioning roads in core grizzly habitat,” Nielsen added.

The research was funded by Alberta Innovates Bio Solutions, the Natural Sciences and Engineering Research Council of Canada, the Canada Foundation for Innovation and the Foothills Research Institute.