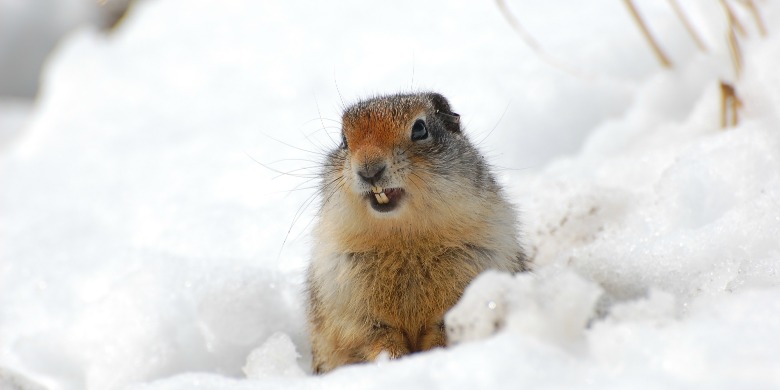 (Edmonton) Climate change is causing a late wake-up call from hibernation for a species of Rocky Mountain ground squirrel—and the effect is deadly.

A University of Alberta-led international research team examined data on a population of Columbian ground squirrels and found that a trend of late-spring snowfalls has delayed the animals’ emergence from hibernation by 10 days over the last 20 years.

U of A evolutionary ecologist Jeff Lane explained that Columbian ground squirrels are on a tight schedule: Females mate four days after emerging from hibernation. They give birth 24 days later. The newborns are nursed for 28 days, then they’re on their own.

“Losing just 10 days during their short active period reduces their opportunity to eat enough food so they can survive through the next hibernation period of eight to nine months,” said Lane.

Research shows there’s little wiggle room in the ground squirrel’s life cycle. The period of plant growth that provides their food supply is only three to four months long on their home turf, skirting the Rocky Mountains.

The study area is a 200-metre by 400-metre block in a sub-alpine meadow west of Calgary. Lane says the data were collected through observation, and by trapping and releasing all the ground squirrels in the study area to monitor their condition. The study area was set up by
U of A biologists in 1992. Lane began his hibernation study five years ago and collaborated with researchers in Scotland and France, and at the U of A.

“Our data show that over the life of the study, the survival rate of adult females has fallen by 20 per cent, and much of this could be due to late emergence from their burrows brought on by late-spring snowfalls,” said Lane. The researchers say the study area’s population trend has gone from one of growth 20 years ago to its current state of just maintaining stability.

Lane was the lead researcher on the paper, which was published Aug. 8 in the online edition of the journal Nature.