Coaching for coaches a win for student athletes 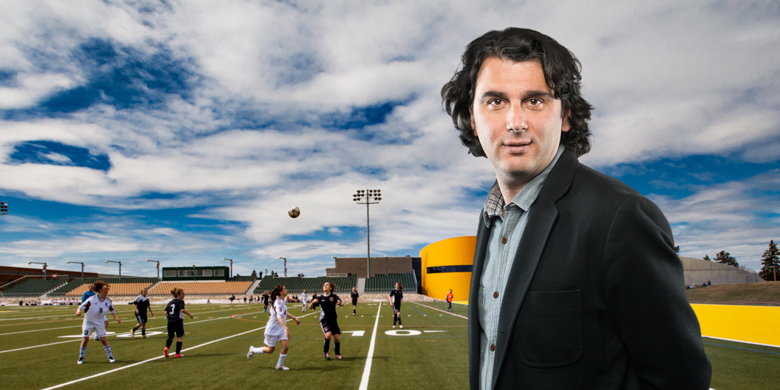 (Edmon­ton) It’s not every day that varsity-level coaches and graduate students get an opportunity to spend a week with a renowned sport psychologist who routinely tutors elite-level athletes the world over. But that’s part of the winning formula the University of Alberta wants to create for its Bears and Pandas teams.

Nearly two-dozen Golden Bears and Pandas coaches and graduate students spent five days working with Makis Chamalidis, a sports counsellor and author who has worked with more than 400 elite-level athletes and coaches throughout the world. For the past 16 years, Chamalidis has been a sport psychologist at France’s National Tennis Training Centre at Roland Garros.

Athletics director Ian Reade invited Chamalidis to the U of A after first meeting him in Europe several years ago and hearing about his reputation for helping athletes think and act differently, with a reliance on independence. He called the lectures a unique learning opportunity that should improve relationships between coaches and athletes and likened the sessions to a mental health initiative for athletes who are under tremendous pressure to succeed.

“The challenge for us is we set our standards so high that when athletes go to a national championship and they don’t win, it can take time to recover psychologically,” Reade said.

“What we want to do is build our capacity to deal with these types of issues and build a healthier athlete and a healthier coach. We’re trying to develop some strategies around that.”

Chamalidis said the workshops are designed to help coaches and grad students with an interest in coaching become better mental coaches, which can help athletes succeed.

“The first person who works mentally with an athlete is the coach—they’re with the athlete all the time. An athlete can always work with other people like sport psychologists, but a coach can help better deal with emotions, help them develop mental strategies, develop match and pre-match routines, can work on communication to find the right attitudes, the right words to have an impact on the player,” he said.

During his lectures, split between Golden Bears and Pandas coaches in the mornings and graduate students in the afternoons, Chamalidis went over concepts such as creating a “firewall” so athletes can maintain concentration during competition. He also stressed the importance of creating routines.

The difference between an average coach and a very good coach, he added, is an almost obsessive desire to work harder for success.

“The great coach is also someone who goes beyond conformism, who is creative, thinking out of the box, and who is able to surprise you. But it’s also a question of intelligence, of their relationship with athletes and how you deal with them.”

Erin Brennan, a master of coaching student specializing in sport psychology training, appreciated the opportunity to learn from someone of Chamalidis’ caliber, and alongside coaches and students with a range of experience.

“The University of Alberta’s commitment to extraordinary performance—raising athletes beyond the average, taking it to the next level and looking at the holistic perspective of performance and training, and taking pride in teaching their coaches and support staff—is remarkable. They commit to excellence on all levels.”

Coaching for coaches a win for student athletes