I'm a head coach today because of Clare Drake. 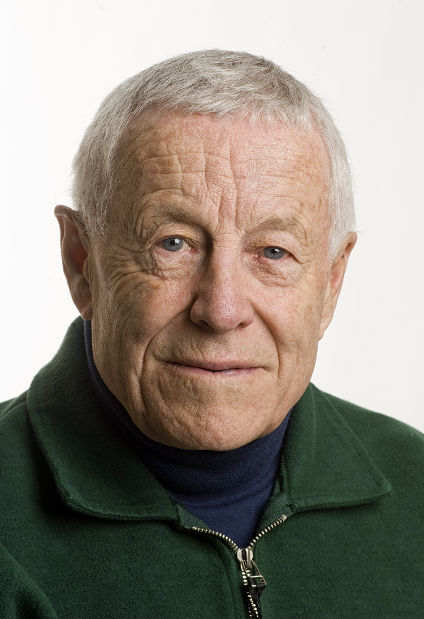 Clare Drake, seen here speaking with Golden Bears goalies Barry Richardson (left) and Jim Coombs during the 1971-72 campaign, will be inducted into the Hockey Hall of Fame in November.

(Edmonton) Long-standing and iconic University of Alberta coach Clare Drake has finally been called to the Hockey Hall of Fame.

“This is a very great honour and I am humbled to be inducted amongst so many great individuals,” said Drake. “There are well over 300 people who have influenced me and helped me along the way—from players, coaches, assistant coaches and trainers—I must thank them all.

“This is truly a wonderful feeling and I never thought it would happen to me.”

A longtime professor emeritus in the Faculty of Physical Education and Recreation, Drake is synonymous with Golden Bears hockey. He led his teams to six Canadian titles and 17 conference championships over a 28-year head coaching career in which he compiled a 697-296-37 record.

“Hard work is the cornerstone for becoming successful, as I’ve said for a long time to all my players, and it’s the same thing for a coach,” Drake said in a 2008 interview upon his induction into the Alberta Order of Excellence—the province’s highest civilian honour. “Success is not a natural phenomenon. Success only occurs to people who are willing to put in the time to achieve it.”

While Drake (‘58 BEd, ‘95 LLD) is a Canadian coaching legend, he said he was always a teacher first—one who instilled a lifelong passion for learning in generations of U of A student-athletes.

He considered it a great privilege to work with student-athletes who were committed to becoming better players on the ice and well-rounded individuals in life. Students were motivated to reach for new heights and Drake played an integral role as a coach and teacher.

“They’re the same thing, really. It means you’re taking the wisdom of people that have gone before and ... applying some of that wisdom to your own life,” he said.

Life of a champion

Drake played one season with the Golden Bears, winning the Western Canada Championships as the team’s scoring co-leader. After earning his bachelor of education in 1954, he moved to Düsseldorf, Germany, where he played and coached hockey in the semi-pro ranks—an experience that ignited his passion for coaching.

Drake and his wife Dolly returned to Canada a year later so he could teach and coach at the newly built Strathcona Composite High School. Around the same time, he also joined the Golden Bears as an assistant to head coach Don Smith.

Drake would take over as head coach upon Smith’s retirement in 1958, setting in motion a career that would solidify him as the nation’s most respected bench boss in inter-university hockey.

“Clare has influenced so many people through his coaching, both in the sport and academic world,” said Stan Marple, general manager of the Golden Bears hockey team. “Coach Drake was all about the sharing of coaching techniques and philosophy, not only within the Golden Bears system, but within many facets of the hockey community. He is mentor to so many and has been instrumental in setting the foundation for what Golden Bears Hockey is today.”

His coaching expertise also extended to football, when he guided the Golden Bears for three years in the mid-to-late 1960s, compiling a record of 23-4 and earning a national title, making him the only Canadian interuniversity coach to lead both hockey and football teams to national championships in the same academic year, 1967-68.

Legacy extends beyond the U of A

Drake’s legacy can also be felt outside the U of A. He was a co-coach of the 1980 Canadian Olympic hockey team and coached several national student teams. In 1984, he guided Team Canada to its first ever gold medal at the Spengler Cup tournament.

“I’m a head coach today because of Clare Drake,” Toronto Maple Leafs head coach Mike Babcock told the Edmonton Journal in 2011 when he was head coach of the Detroit Red Wings. “His inventiveness and analytical mind have contributed so much to the growth in the tactics and strategies of Canadian hockey.”

During Drake’s historic career, there has been no shortage of accolades. The U of A inducted him into the U of A Sports Wall of Fame in 1987 and renamed Varsity Ice Arena the Clare Drake Arena three years later. He also received an honorary doctor of laws degree from his alma mater in 1995 and a Distinguished Alumni Award in 1999.

"There are very few true pioneers left in hockey, but Clare Drake is certainly that," said Kerry Mummery, dean of the Faculty of Physical Education and Recreation. "His legacy at the University of Alberta endures, and the seeds of his teaching are spread widely through all levels of hockey."