As a Golden Bears wrestler and a graduating student, Jason Wass found a touch of destiny at UAlberta. 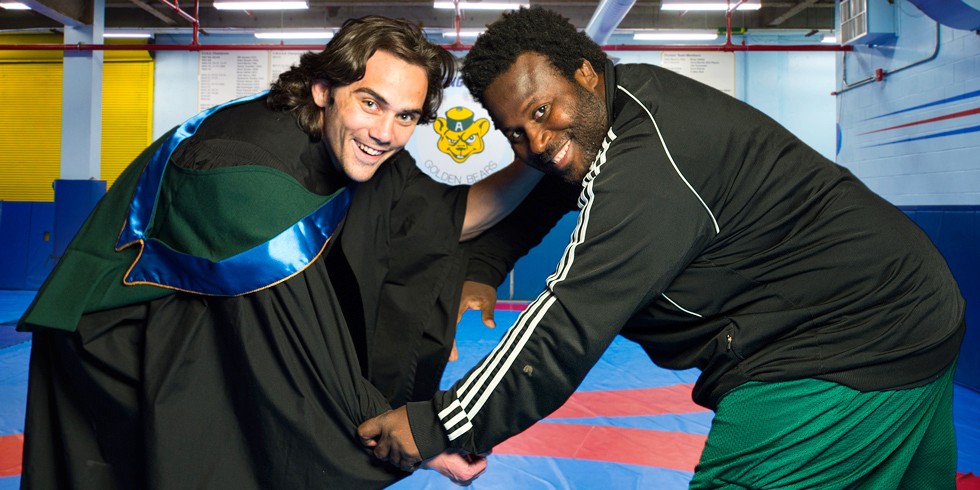 (Edmonton) A promising wrestler throughout high school, Jason Wass says he can’t recall a time when the University of Alberta didn’t have him in a figurative headlock.

A graduate of the U of A-based Edmonton Wrestling Club and high school wrestling stalwart, the former U of A grappler remembers everything was as it should be when he first strolled onto the campus of his only post-secondary choice in the early days of September 2008. “Being around the university since I was 13 years old and refining my skills as an athlete at the university helped get me to know that the U of A was the perfect fit."

However, the U of A's hold over Wass loosened just a little a with news that acclaimed wrestling coach Vang Ioannides had left his long-time wrestling post to become the school's associate athletic director. It loosened a lot as a committee of volunteers and wrestling alumni tried in vain to fill the coaching void of what turned out to be a disconcerting 2008-09 wrestling campaign that saw the men’s team stumble to a 10th-place finish nationally.

Somewhat discouraged and a little disheartened, Wass remembers thinking maybe it was time to focus his efforts elsewhere.

“There were a lot of ups and downs that year, but one of my most cherished memories from university begins with how poorly it all started.”

Before spring was out in 2009, the university reached back into its past and named former Golden Bears wrestler and one-time assistant coach Owen Dawkins as interim head coach.

Dawkins wrestled as a Golden Bear in the 90-kilogram weight class under Ioannides from 1999 until 2001, winning CIS gold and a team bronze in 2001 to go with two Canada West gold medals.

After closing out his days as a CIS athlete, Dawkins joined the U of A wrestling coaching ranks, signing on as one of Ioannides’ assistant coaches in 2002, a position he remained in until 2005. In September of that year, Dawkins began a short but fruitful tenure as head coach of the Lakehead University Thunderwolves in Thunder Bay. Dawkins was named the Ontario University Athletics wrestling coach of the year (2005–06), and guided the men’s team to a CIS bronze in 2007–08.

Despite his success in Thunder Bay, when the top U of A wrestling job opened up, Dawkins jumped at the chance to return to his alma mater.

“The way Owen can build a team is at the highest level,” said Wass. “He pulled together a group of guys and girls who cared about the sport.

“He made us work hard, because nothing was going to be given to us.”

U of A wrestling’s fortunes were slow to change at first. In 2010, the Golden Bears jumped to ninth at nationals followed by an eighth-place finish in 2011. But while the men’s gains were modest in the early years of the Dawkins era, the women grapplers pulled a turnaround for the ages. After mustering just an 11th-place finish in 2009, Dawkins guided the Pandas to a respectable seventh in 2010 before pulling off the improbable and winning the program’s first national championship a year later.

Wass himself began to feel the momentum shift, eventually finding success on a mat of a different kind.

In his third year at the U of A, Wass began volunteering with McKernan Junior High School’s wrestling team as well as with the Edmonton Wrestling Club.

What started out as an opportunity to give back seeped into his academic pursuits as Wass decided to couple his studies in the Faculty of Physical Education and Recreation with an education degree.

“I think it had to do with my upbringing in sports and seeing how crucial the coach-athlete relationship is. I feel that it is similar to the student-teacher relationship. The chance to impact people’s lives in a positive way really drew me to the profession.”

With Wass finding his own way, the wrestling began to take care of itself. Buoyed by the Pandas’ success a year earlier, Wass and his Golden Bears teammates served notice with a fourth at the 2012 CIS championships before winning the program’s first men’s national championship in 41 years in 2013—in Wass’s final year of eligibility.

“Being part of that was very special, and I will be able to look back at that over the years and remember that as a happy memory,” said Wass.

Wass returned to the U of A this past September to complete his degrees, and continued with wrestling at the U of A, accepting, just as Dawkins before him had, an invitation to help coach the Golden Bears. And he has already embarked on his new career, teaching at M.E. LaZerte High School in Edmonton.

As for Dawkins, he is glad to have had an influence on Wass's career choice.

“I have always been thankful for the opportunities wrestling at the U of A gave me. I love coaching because it gives me a chance to help people accomplish their dreams,” said Dawkins. “The wrestling and sport stuff is in addition—it is what helps get you through university. Graduating and moving on with your life is the main goal.”