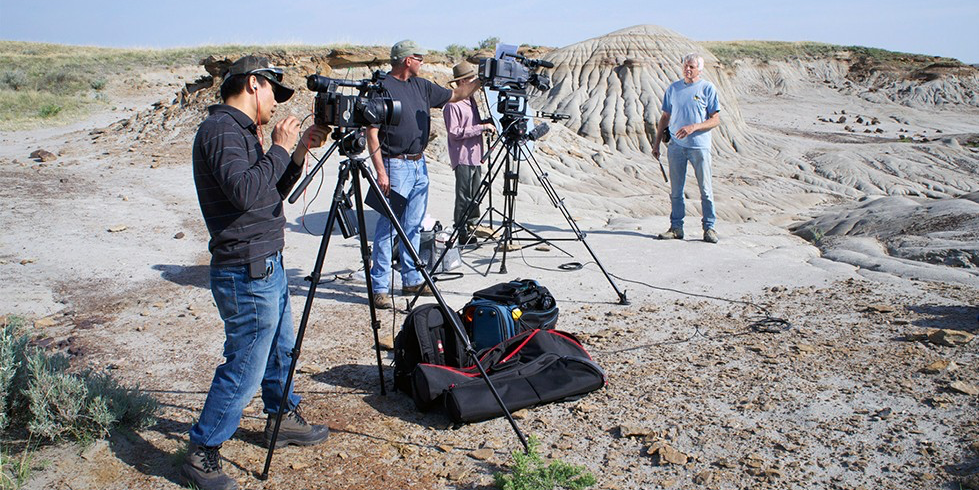 Dino 101 crew filming on location in Alberta's Dinosaur Provincial Park. A video sampler from the popular UAlberta MOOC will be offered to passengers on the U.S. airline JetBlue as part of its new in-flight wi-fi service.

(Edmonton) When New York’s hometown airline JetBlue launches its Fly-Fi Hub service in the new year, online education provider Coursera will provide the airline with video samplers from its 10 best courses as part of a richer content offering for passengers, culled from Coursera’s 871 courses. And the University of Alberta’s first massive open online course, Dino 101, made the list.

Dino 101 has already earned a reputation as the most successful science-based MOOC to date, and now JetBlue passengers can join more than 50,000 learners around the world, along with more than 1,500 U of A students, who have taken the Dino 101 journey back in time, guided by the U of A’s acclaimed paleontologists.

Flying on the digital frontier

Developed by scientists and digital learning experts at the U of A and led by the renowned paleontologist Phil Currie, Dino 101 focuses on dinosaur paleobiology, the study of ancient life in non-avian dinosaurs. Dino 101 highlights U of A research and expertise in paleontology, covering topics such as dinosaur anatomy, biomechanics, species diversity, evolution and extinction. It also showcases Alberta’s rich paleontology assets, including Dinosaur Provincial Park and the Royal Tyrrell Museum. But perhaps the most important lessons come in the introduction to the methods of scientific investigation and evidence-based thinking.

"I have had the privilege of connecting with life from millions of years ago through the fossil remains of dinosaurs. To me, they represent messengers from the past that can help us understand our own place in the world," says Currie. "I am also honoured to share what I’ve learned with the growing body of Dino 101 students around the world, including those who will discover us on their JetBlue flights.”