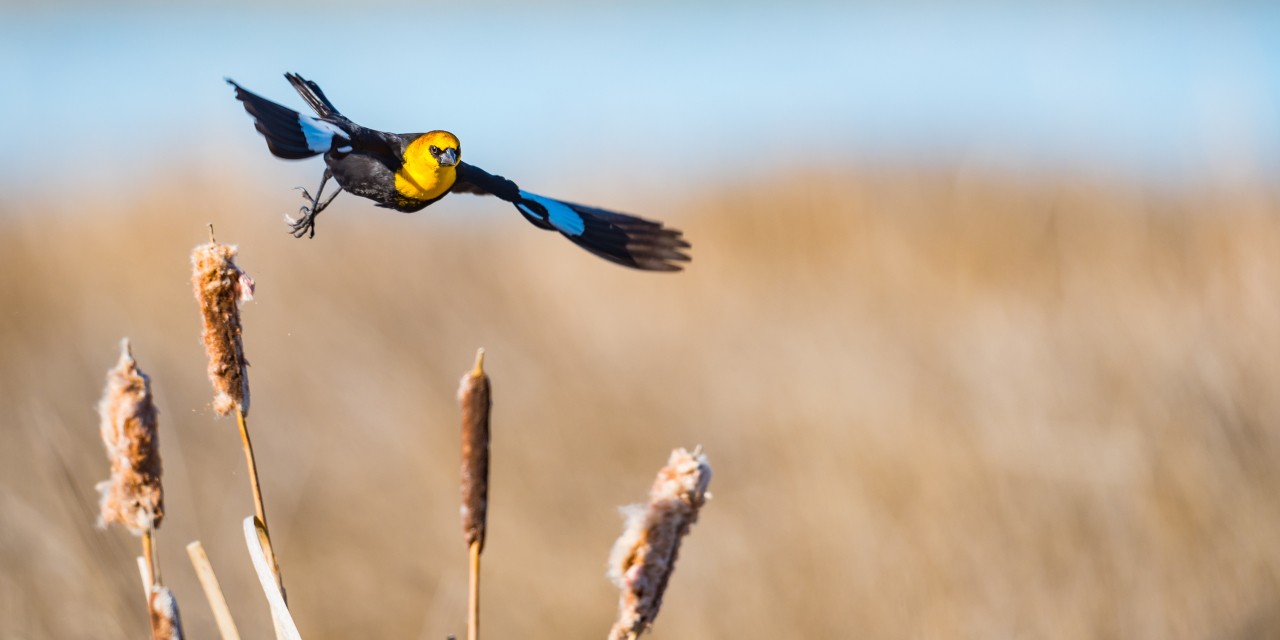 A yellow-headed blackbird takes flight over cattails in a prairie marshland in Alberta. Recent research suggests climate change is as important as habitat loss to bird populations on the Prairies. (Photo: Shutterstock)

The grasslands of the Canadian Prairies are a hidden gem for bird watchers, with millions of migratory birds passing through the area each year. But they are also one of the most transformed landscapes in the world, vanishing more quickly than the Amazon rainforest, as they are swallowed up for other uses, such as agriculture and industry.

Scientists are concerned that these already stressed grasslands may not be able to cope with rapid and ongoing climate change. Canada’s prairie grasslands are expected to get warmer and wetter over time, but there will also be rapid swings between wet and dry conditions and seasonal variability.

These shifts have strong links to plant growth, seed production, insect emergence and the region’s suitability to plants and animals.

As these changes take hold, there will be winners and losers. A warmer and/or wetter year might nurture better growing conditions for the plants that animals rely on for food, or it might hinder animal reproduction. Over time, greater rates of change in temperature and precipitation may force species to adapt or perish.

The Prairies are becoming quieter

The Prairies have lost 60 per cent to 70 per cent of their original wetlands and more than 70 per cent of native grasslands due to agricultural development. The pressure to convert land from its natural state into farmland continues today.

Native grasslands and wetlands have been drained across the Canadian Prairies. Loss of these habitats is ongoing, with an additional 3.6 hectares of wetlands drained every day. (Photos: Ducks Unlimited Canada)

Some native grasslands are protected, but they are under-represented in protected refuges. These areas are often small and isolated, making them more vulnerable to environmental change.

Global warming, for example, is bringing more flood events, severe drought and climatic extremes in the Prairies, which can lead to less suitable habitat and environmental conditions for many animals, including birds. Experts warn that the “Prairies are getting quieter,” but the reasons behind the expanding silence are not fully understood.

Birds on the move

Our new research shows that changing climate patterns—particularly long-term precipitation and temperature change—are as important as habitat loss for birds on the Prairies.

As rainfall, snowfall and temperature have increased in some places across the Prairies since the mid-1900s, the numbers of birds and varieties have also increased. But the numbers of carnivores and omnivores have decreased with long-term increases in either temperature or precipitation.

As the Earth warms, some migratory birds are arriving from the south and nesting earlier in North America and Europe. Many species are also moving to areas that have become progressively warmer and possibly wetter, perhaps to escape drier conditions in the south or shift into new areas that are now more attractive or suitable to birds.

If climate trends continue as projected, the influence of local climate and climate change will likely overtake land use as the most important factor influencing bird populations. There is evidence that the shift has already begun in the Prairies. How this plays out will depend on the balance between precipitation and temperature, and extreme warming could eventually have deleterious impacts on prairie wetlands.

In the same study, we found that aquatic insects—an essential food source for breeding birds—were more sensitive to land use and water chemistry than weather or climate change. Runoff from agricultural lands can add pollutants, including nutrients like nitrogen and phosphorus, to wetlands and have negative effects on aquatic insects.

Landscapes with a higher proportion of natural vegetation around wetlands (also known as riparian vegetation) provided more refuge habitat for species already vulnerable to habitat loss. These areas will only become more important as climate and land-use effects intensify.

The discovery that riparian vegetation improves some of the negative impacts of climate and water quality gradients on a variety of aquatic insects is key for mitigation, because many bird groups increased as the amount of vegetation increased. Riparian vegetation should be considered in future studies using land management experiments in agricultural environments.

Although both climate change and land use practices will influence prairie species, only the latter can be practically managed. To ensure that prairie biodiversity is sustained in a changing climate, government policies could encourage producers to retain wetlands, areas of natural habitat and riparian buffers to reduce disturbances and the negative consequences of increasingly intensive agriculture.

Rewarding producers for sustainable agricultural practices could be another path forward. Farm groups have been asking for almost a decade for producers to be compensated in some way for the ecosystem services—carbon storage by wetlands, groundwater recharge, water storage, maintaining habitat for biodiversity—they provide.

This article originally appeared Nov. 4 in The Conversation.