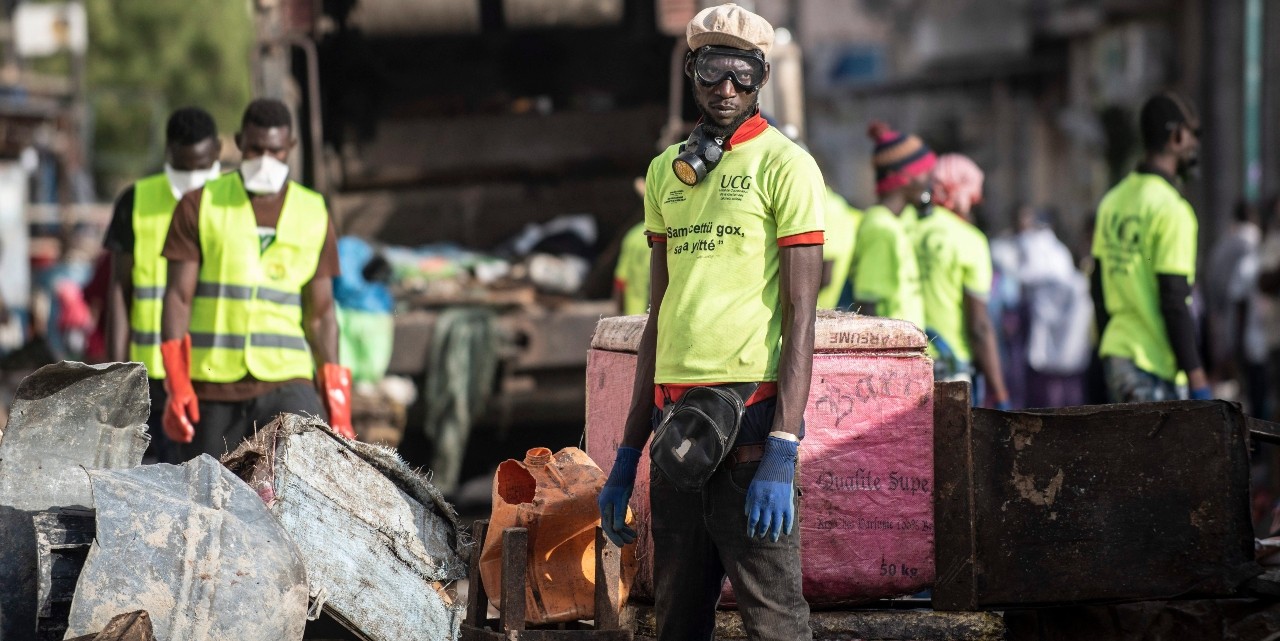 Municipal workers block the streets of the Medina neighbourhood of Dakar, Senegal, on March 22, 2020, as a bulldozer demolishes informal shops in an effort to stop the spread of the coronavirus. (Photo: AP/Sylvain Cherkaoui)

As the SARS-CoV-2 virus sweeps across the globe, African countries are bracing themselves for grave consequences. The projections released on April 17 include a worst-case scenario of a billion cases and 3.3 million deaths. This scenario is based on an assumption of no social distancing measures being taken. With intense social distancing, the estimates drop to 122 million infections and 300,000 deaths.

These staggering estimates are a call to urgent action. The time to act in Africa is now, and to apply lessons from its own recent history of battling epidemics such as Ebola and HIV, as well as lessons from countries where COVID-19 outbreaks may now be peaking.

No one knows, though, how Africa is going to come through this pandemic. Compared with the rest of the world, especially Asia, the virus has arrived later, giving opportunity for real-time lessons that can help direct Africa’s battle.

We offer three recommendations in this regard:

This is the first epidemic of global scale in the age of the internet. Information, good and bad, spreads rapidly with no regard to national borders. All levels of governments have struggled to keep abreast of the fast-moving pandemic and its implications.

Complicating matters, misinformation—about lines of transmission of the virus, immune-boosting remedies and even probable cures—travels as quickly as science-based information, and is often propagated through social media.

This pandemic requires science-based messaging led by all levels of government. In the best examples, heads of governments, including Canada, give daily briefings and take questions from media. By directly advising people and communities through public service announcements, and enlisting influencers to propagate key messages, governments can create a sense of confidence while confronting misinformation.

Without a steady flow of accurate and clear messages, misinformation and fear take hold. Once this happens it is difficult to undo the damage.

Co-ordinate political, medical and civic action with equity in mind

The role of governments does not stop with managing information. Governments need to marshal all the resources and instruments they have to spearhead a co-ordinated response to the pandemic.

Key early steps are to work with medical and public health authorities to co-ordinate and implement a multi-pronged response. This should include data collection and monitoring, protective initiatives for health-care and essential services workers, and containment and mitigation strategies, as well as information dissemination.

Governments, medical and civic leaders must be proactive in dispelling unhelpful public perceptions before they take hold. For example, fears exist that governments are neglecting the most vulnerable members of society—especially the elderly, and those living in poverty and in rural and remote areas. People are also worried that essential services such as food, water, electricity and health care may be disrupted or overwhelmed.

Strikes by health-care workers are already threatening the response capacities in countries such as Zimbabwe, Ghana and Nigeria. Citizens in many countries fear that their personal safety and human rights may be endangered during this crisis.

These fears are real. Governments must address them by detailing the measures they have taken to provide a social safety net for the most vulnerable, by tackling potential artificial price hikes in essential goods and services, and by protecting people from human rights violations that may result from misapplication of enforcement measures.

An unequivocal stance of transparency and accountability can help minimize the loss of lives from COVID-19. More than that, it can foster public confidence and help ensure the resilience of Africa’s economic, political and health systems once the pandemic is over.

In Africa, as in other parts of the world, many countries are currently unable to meet the increasing demands for testing. Consequently, some have established protocols that target people considered most likely to have contracted the virus. But there are concerns that inequitable access to testing and lack of transparency could threaten control efforts. In responding to COVID-19, African health systems will need to pay particular attention to equity.

In South Africa, tests are available at government facilities and private laboratories. However, even in countries where most tests are provided by publicly funded facilities, concerns exist that influential members of society, such as politicians and celebrities, have privileged access.

This inequity may lead to the distribution of positive tests skewing strongly toward wealthier groups. This may create a false sense of immunity among population groups with the fewest resources, who already tend to see COVID-19 as “the rich person’s disease.”

To address this misconception, testing needs to be made available to everyone who needs it and not only those who are well-resourced. Given the public health implications of missed cases, countries must prioritize public funding of COVID-19 testing and treatment, and access to testing must be made equitable and transparent.

In addition to lessons learned from COVID-19’s spread in Asia and Europe, Africa can also learn from its own experiences, including facing earlier health crises. During the 2014 Ebola virus disease epidemic in West Africa over 29,000 people were infected, and about 11,310 of them died. In addition to these deaths, significant socioeconomic and political disruptions occurred.

These experiences have taught African leaders valuable lessons and instilled confidence that they can pull through major catastrophes. As in 2014 when Ebola struck, the world needs to stand with African leaders, medical and public health systems, and civic society to beat back the threat of a billion COVID-19 cases in Africa.

The announcement by G20 countries to suspend the debt service payments by the world’s lower-income countries is a promising first step, but the high-income countries and the development financing institutions (World Bank, IMF) need to do much more.

This is a wake-up call to humanity. A health threat this dire requires a response of the same magnitude.

This is an updated version of an article that originally appeared April 21 in The Conversation.