Fear-mongering and stigmatizing Muslims do little to solve the problem of homegrown radicals. 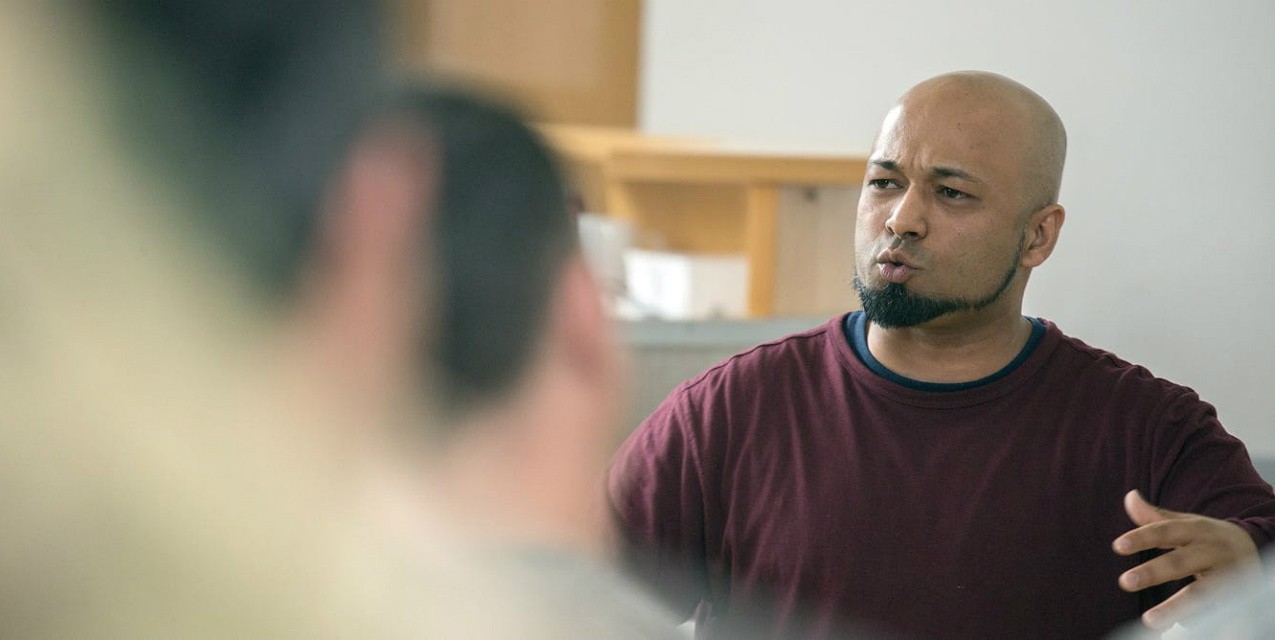 Mubin Shaikh, a Toronto-born deradicalization expert, speaks during a counterterrorism event in Germany in May 2015. (Photo: U.S. Army)

Canada’s spy agency, CSIS, recently revealed that 60 foreign fighters who joined ISIS and other terror groups in Syria and Iraq are now back and living in Canada.

Scheer has expressed concerns about the national security threat posed by these fighters, while Trudeau pledged to prosecute those who broke Canada’s anti-terrorism laws. The prime minister is also in favour of reintegrating these radicalized citizens into society through deradicalization programs.

In 2015, the standing Senate committee on national security and defence released a report entitled Countering the Terrorist Threat in Canada. It provided details about the more than 130 Canadians who joined organizations such as ISIS.

However, there is scant explanation of how these individuals shifted from beer and hockey to engaging in terrorist acts abroad. What made ISIS attractive to both Canadian converts like Damien Clairmont and Andre Poulin and born-again Muslims such as Abu Turaab al-Kanadi?

Many of these ISIS followers—Western converts and newly observant Muslims alike—had issues of identity in common. Some had troubled childhoods and intense struggles with their identities, sparking a great deal of inner confusion and turmoil.

John McCoy, a Canadian terrorism expert, explains the phenomenon by looking at the European context.

He notes that many of the terrorists who perpetrated the attacks in Nice, Paris and Belgium were born or raised in Europe in ghettoized suburbs.

“They are individuals who do not have direct connections to the land and culture of their parents and never felt welcome in the society in which they were raised. They are stuck between two worlds.”

For these young men, Islam became an outlet for voicing anger, discontent and identity confusion.

French political scientist Oliver Roy has offered a novel perspective on understanding terrorism that he calls “the Islamization of radicalism.”

In an article in The Guardian, Roy claims that “far from exonerating Islam, the Islamization of radicalism forces us to ask why and how rebellious youths have found in Islam the paradigm of their total revolt.”

And so it’s not that Islam is becoming radicalized, but rather political radicalization has been Islamicized.

Providing examples of Western radical youth, such as the Baader-Meinhof gang in Germany and the Red Brigades in Italy, he points to many similarities with western jihadists today, regardless of whether they’re Muslims or converts.

Roy’s idea of the Islamization of radicalism offers a sound explanation for the appeal of jihad for western recruits in particular.

Deradicalization is defined by John Horgan, a professor of security studies at Georgia State University, as “the social and psychological process whereby an individual’s commitment to, and involvement in, violent radicalization is reduced to the extent that they are no longer at risk of involvement and engagement in violent activity.”

It can be achieved through programs that are geared toward moving people smoothly and peacefully from violent extremism. These programs can take different shapes, subjects, aims and sizes.

Recent research by academics and researchers underscores that radicalization and extremism can be eroded in several ways using various approaches.

We have our own example here in Canada. Abu Huzaifa served as an ISIS enforcer in Syria but left the group and came to realize he’d been deceived. After coming back to Canada and working with Mubin Shaikh, a Toronto-born deradicalization expert, Huzaifa has been successfully deradicalized.

Deradicalization is a major component of counterterrorism, and should be holistic and comprehensive. Governments and civil society should employ multiple preventive mechanisms instead of focusing on military and security approaches.

By locking up radicalized individuals, the problem of radicalization isn’t solved. Instead, these individuals often set up recruitment networks inside the prisons. Guantanamo Bay prison is an illustrative example—many of the extremists who have been jailed there for long periods rejoined terrorist groups when deported to their home countries.

Marisa Porges, an American foreign policy expert, argues that “at least 74 Guantanamo detainees—one in five of those freed—returned to terrorist activity after release.” One of them, she wrote, fled to Yemen after release and became deputy commander of al-Qaida in the Arabian Peninsula.

No country is immune to terrorism. There is no zero risk.

International and regional conflicts will continue to shape and mould the nature of terrorist threats to Canada. But in order to address the issue of violent extremist groups, counterterrorism ought not to revolve solely around military action.

There must also be a comprehensive approach that incorporates education, policing, community, health, culture and democracy. Academic research suggests that terrorism could be significantly diminished via several approaches: crime prevention, community engagement and public health policies.

Despite the sensitivity of the issue, especially when the safety and security of Canadian citizens are at stake, Trudeau’s approach could therefore be deemed the most effective and efficient.

The Conservative approach, meantime, not only indicates a “once a terrorist, always a terrorist” mindset, it also capitalizes on fear and stigmatization of Muslims, and does little to resolve the issue of homegrown radicals.

Houssem Ben Lazreg is a PhD candidate at the University of Alberta with the Department of Modern Languages and Cultural Studies. He also teaches Arabic and French, and works as a freelance translator.

This article originally appeared Dec. 11 in The Conversation.