COMMENTARY || Diversity is indispensable to excellence in research

Recent increases in diversity of researchers receiving federal grants show there is no conflict between equity and excellence, argues U of A political scientist. 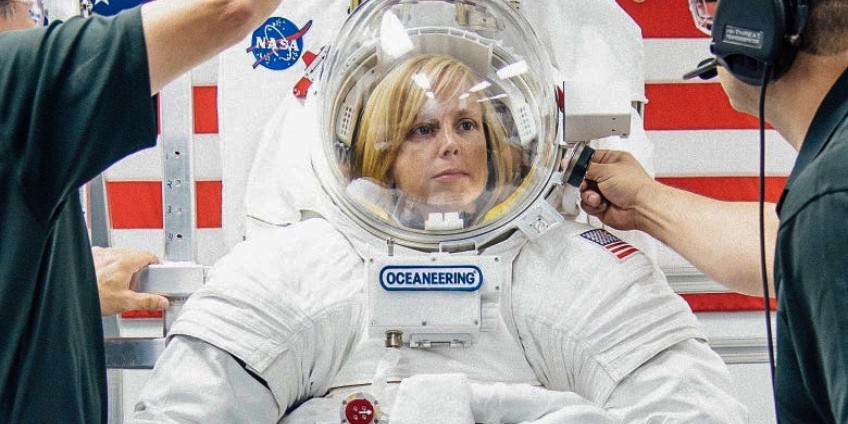 The historic joint spacewalk of two female astronauts outside the International Space Station was thwarted because the station did not have spacesuits that fit both women. (Photo: NASA)

Earlier this year, NASA’s plan to conduct a historic joint spacewalk of two female astronauts outside the International Space Station was thwarted because the station did not have space suits that fit both women.

Perhaps this is not surprising given the story told in the Oscar-nominated film Hidden Figures. Three brilliant black female mathematicians who had worked in racially segregated unit at NASA were the brains behind the computations that helped make John Glenn the first American to orbit the earth. Yet, until recently, their contributions went unrecognized. The film was a reminder that renowned scientific organizations can display gender and race biases.

There have been other hard lessons about what happens when scholars ignore diversity in the composition of research teams and in their research approach.

When the Apple Health app was first released in 2014 it failed to include a health metric that 50 per cent of the population monitors: menstruation.

Databases used to study the genetics of disease largely made up of samples of people with European ancestry hamper the research and endanger the health care of those outside the database.

Crash test dummies geared to men’s bodies have meant that women and children involved in collisions are nearly 50 per cent more likely to be seriously hurt.

Speech recognition software, trained with a narrow range of American male voices, led to products that struggle to recognize female voices and a diversity of accents.

Products that use facial recognition software, such as online gaming consoles, webcam technology and even automatic soap dispensers, have had difficulties recognizing dark skin tones.

Besides the evidence of these errors, there is an ever-growing body of research to show that diversity and inclusion amplifies excellence and, indeed, fuels creativity and innovation.

Despite all this evidence, there are some who continue to assert that diversity is in conflict with excellence. They insinuate that some individuals, by virtue of belonging to a particular social group, have less merit.

This attitude and opinion meet the standard definition of a negative stereotype. This stereotype generates and reinforces diversity-as-deficit thinking.

Far from promoting the death of meritocracy as some critics have suggested, the diversity-as-deficit stereotype promotes an exclusive myth of meritocracy. Diversity and inclusion practices ensure that systemic barriers, stereotypes and stigmas do not block the breadth of research talent contributing to the advancement of knowledge.

The diversity of a team can help drive and shape research questions, methods and perspectives. Diverse teams tend to be smarter, demonstrate fewer biases and errors, make better decisions and generate research with greater impact.

For example, laboratory experiments have shown that, compared with all-white juries, diverse juries take more time to process the evidence and facts and engage in better deliberations.

Equity remains vital to ensuring recognition of the talents of women, Indigenous peoples, visible minorities, persons with disabilities and LGBTQ. As Justice Rosalie Silberman Abella made clear in her 1984 final report for the Royal Commission on Equality in Employment:

“The obstacles in their way are so formidable and self-perpetuating that they cannot be overcome without intervention. It is both intolerable and insensitive if we simply wait and hope that the barriers will disappear with time.”

Research has demonstrated that systemic barriers and unconscious biases can prevent some scholars, with stellar curriculum vitae and demonstrated research excellence, from being nominated for prestigious research prizes and awards.

It is within this unequal context that the Canada Research Chairs were created in 2000 to attract and retain some of the world’s most accomplished and promising minds. The program invests $295 million annually for up to 2,285 researcher chair awards across Canada. The fund supports national and international collaborations and undergraduate, graduate and post-doctoral training—the next generation of researchers.

Challenges to the chair program

Despite significant successes, the Canada Research Chairs program has faced longstanding challenges on how equitably the chair positions are filled. In 2003, human rights complaints were launched by eight academic women.

Those eight women identified inequities that resulted in a 2006 Canadian human rights settlement. Due to a lack of progress in addressing inequities, the terms of the settlement were updated by a 2019 addendum.

As the chart below demonstrates, representation started to improve in 2017, when participating institutions began implementing equity and diversity action plans. This sharp increase over a short period directly counters the “pipeline argument” that there is a lack of qualified candidates. This is a standard argument sometimes used to justify a lack of diversity. 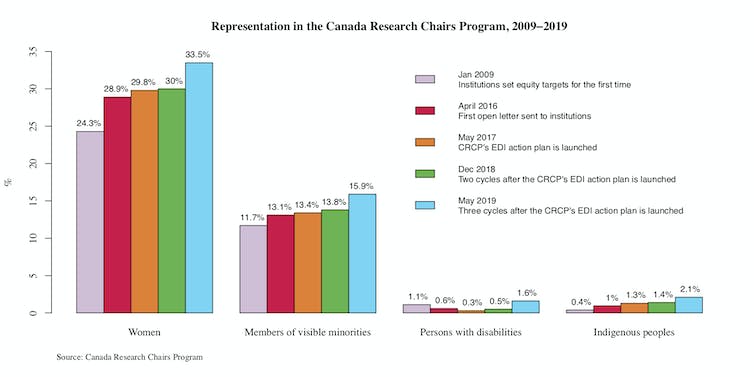 Over the next years, the best practice measures reinforced by the 2019 addendum will enable a proactive approach to increasing the representational targets by 2029 and addressing blocked opportunity structures that impede the equitable participation of researchers from diverse backgrounds.

The program will stress diversity in both the junior and senior Canada Research Chairs. It will reinforce the importance of collecting disaggregated demographic data, monitoring participation and increasing transparency and accountability. Most data are presented in an aggregated manner—for example, “women” does not help us understand the status of Indigenous or racialized or women who are LGBTQ.

Therefore, using an intersectional lens, it will tackle disadvantages faced by the most marginalized scholars who are, for example, racialized and Indigenous women, and those with visible and invisible disabilities. For the first time, the program will monitor the participation of researchers from the LGBTQ community.

We have learned that stereotypes and stigma make it difficult for persons with disabilities to self-identify within their institutions and the program. Consequently, the program will consult directly with scholars with disabilities to better address the obstacles they face. Given that the current allocation of chairs to institutions does not respond to the geographical distribution of First Nations, Métis and Inuit peoples, nor to their distinctive research needs, the program will address any gaps through direct engagement with Indigenous communities.

When proactive measures are taken to identify and remove systemic barriers and biases and to increase accountability, more diverse cohorts of excellent researchers are nominated to the program. The bottom line is there is no antagonism between diversity and excellence. To the contrary, diversity is indispensable to excellence in research and innovation.

Malinda S. Smith is professor of political science at the Univerity of Alberta. Dominique Bérubé is vice-president of research programs at the Social Sciences and Humanities Research Council of Canada. Marie-Lynne Boudreau is deputy director of policy, performance, equity and diversity at the Tri-Agency Institutional Programs Secretariat.

This opinion-editorial originally appeared Aug. 27 in The Conversation.

COMMENTARY || Diversity is indispensable to excellence in research