'Eskimo' signals archaic stereotype and is considered a racial slur by most Inuit, argues PhD student. 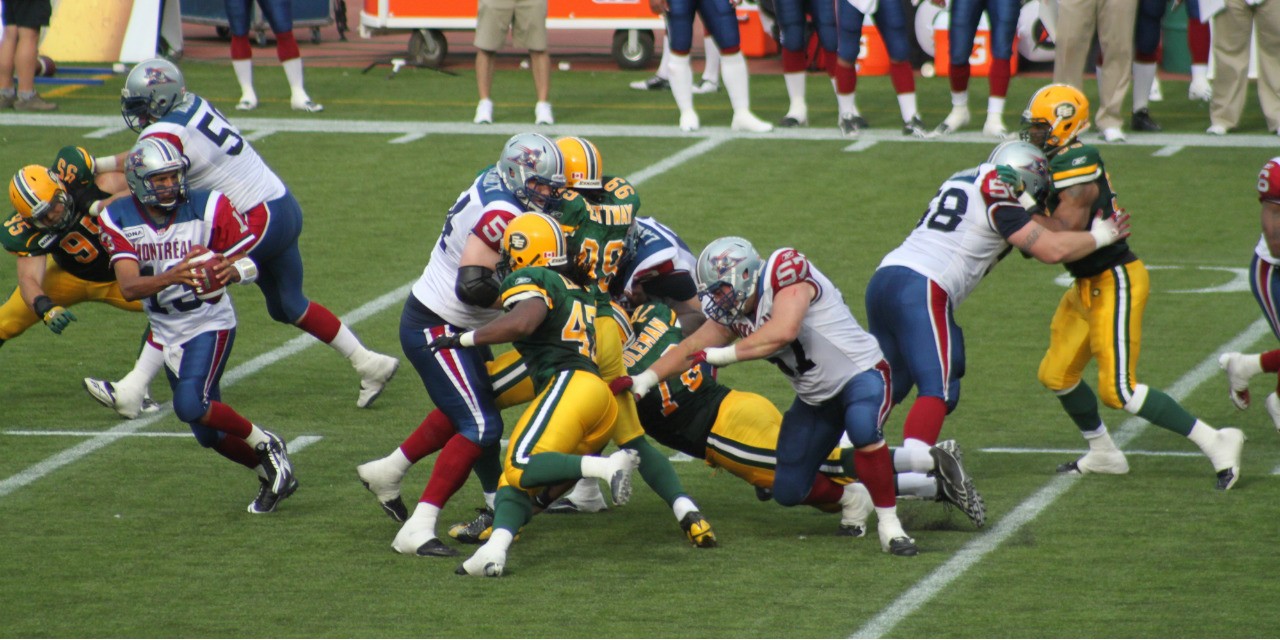 The Edmonton Eskimos have a big football game Sunday and thousands of people in my hometown will be cheering them on in the hope the team makes it to next weekend’s championship Grey Cup game. When I think of my city’s Canadian Football League team, I have a different hope—that it will soon stop using the word “Eskimos.”

The use of the Eskimos name has been a recurring issue for the past few years, especially since Natan Obed, national Inuit leader for Inuit Tapiriit Kanatami, called for the elimination of the name as part of his organization’s ongoing fight against colonization in the name of reconciliation.

“The colonial legacy of naming is about power and control,” said Obed. “The issue of Inuit being used as a sports team mascot matters, because this is the way this legacy continues to play out in popular culture.”

As an Inuit scholar and writer, I have also spoken on this topic several times, both with the media and within my own work.

The Edmonton Eskimos are an institution and, like most institutions, want to appear as though they are helping and respecting the less fortunate or the underdogs of society. The Edmonton football team has said they use their name with pride. In fact, they are disrespecting and suppressing Inuit peoples.

I live in Edmonton—a city that presents itself as being progressive and modern. So why continue to use a term circulated by anthropologists hundreds of years ago?

More importantly, why continue to make use of a word that is considered to be—by the people most affected—a racial slur?

In my creative work, when I make use of the word Eskimo it is to bring attention to the ongoing colonization of Inuit peoples in Canada. Sadly, most of the Canadian population has been indoctrinated into the grand narrative of our country’s history in which Aboriginal Canadians are absent.

Therefore, the general population is led to believe the word Eskimo is harmless. This is rhetoric, constantly generated by media, to an audience that is uninformed or misinformed about the truth of Inuit existence in Canada.

The issue is not only about the use of a word, it is also about the disparity that Inuit Canadians live within on a daily basis. It is about Inuit as the smallest group of Aboriginal Canadians, holding the rank of first place in all the statistics that point to poverty, food scarcity and high attrition rates in high school.

Painful and abusive rhetoric has both emotional and financial costs. From where I stand, “The Edmonton Eskimos” have done very well financially off of the word Eskimo. However, I do not see where the team or the CFL has given back to Inuit Canadians as a whole.

Inuit are contributing citizens of Canada. We have always paid full taxes. We do not receive any form of individual payment for the resources that are harvested within the northern areas of Canada.

Any profits received from the resources that Canada or a foreign industry pay for the right to harvest, is placed into a heritage trust account, ensuring that Inuit history and language is sustained into future generations.

The public may think that a land claims agreement represents a huge payout to Inuit in the north, but it does not. It represents an agreement that places the federal government into a position of fulfilling a fiduciary obligation towards the people whose land and resources they wanted.

My opposition of the use of the word Eskimo by a major football team is not just about cultural appropriation.

Eliminating the use of the word Eskimo is about the empowerment and respect required and demanded by Inuit Canadians.

I heard on CBC Calgary that a small social media survey was taken within the northern areas of Canada where the response was in favour of the word, Eskimo. I also believe that if one Inuit person says, “I don’t mind it. That’s what we are!” the media and the institutions that hold power will feel justified in how they use the word.

Last week, Global News reported on a national survey which found only 21 per cent of Canadians believed the Eskimos team name to be unacceptable. In Alberta, that number was just 12 per cent. But this was a poll of only 1,005 people. Clearly, media can present information that leaves out important facts, and does not give a true representation of an issue. Perhaps this can be interpreted as yet another way an institution protects itself.

Another issue is some non-Inuit may feel that by supporting a football team named the Eskimos, they have somehow engaged with Inuit culture or are supporting an Aboriginal group. But Inuit never invented or played football traditionally. Inuit traditional sport is more complex, requiring an intersection of finesse and skill.

Perhaps becoming involved in the Arctic Games, or informing oneself on what Inuit culture is, could be a form of personal reconciliation that mainstream society could take up.

I speak from what I know. What I know is the name of a football team generates a great deal of passion and energy. I would like to see that passion and energy from the fans and general public put into the social justice issues that the Inuit represent. If that happened, what a beautiful world we would live in.

Inuttigut. We the Inuit: We are here.

Norma Dunning is a PhD candidate in the Department of Educational Policy Studies at the University of Alberta.

This article originally appeared Nov. 17 in The Conversation.