They aim to resonate with voters, but campaign catchphrases offer few insights into what parties actually plan to do if elected, says U of A political scientist. 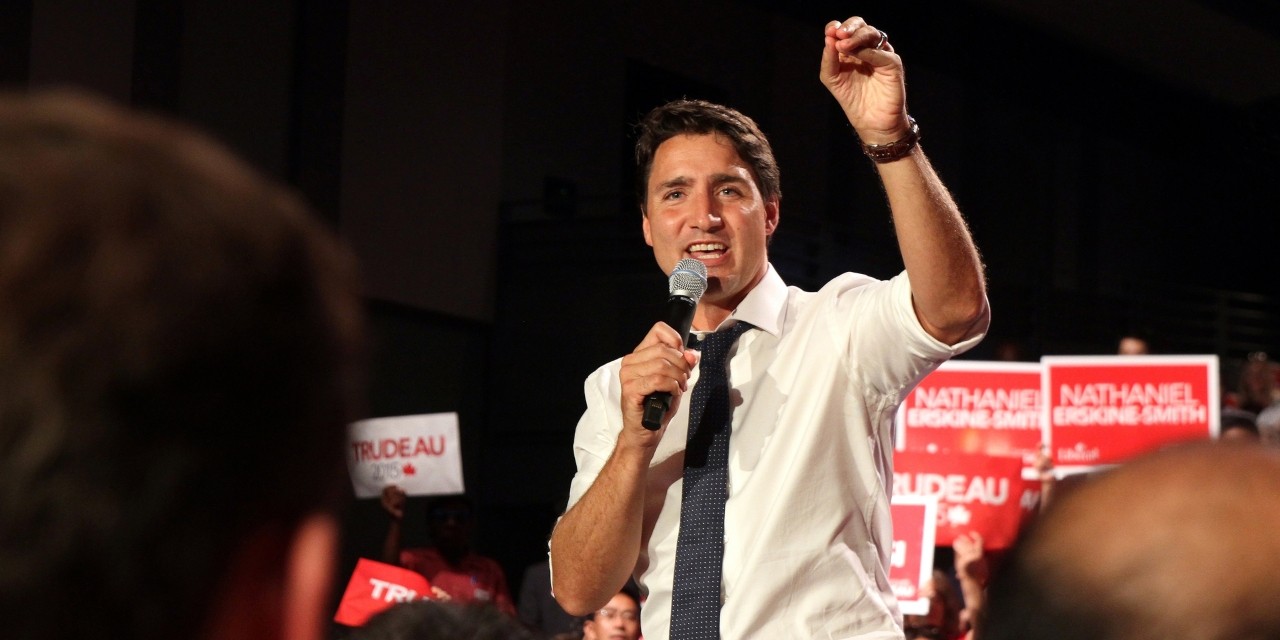 Liberal Party leader Justin Trudeau’s campaign slogan, “Choose forward,” harks back to the Liberals’ 2004 slogan, “Move forward”—but like the other parties’ slogans in the 2019 election, neither message offers insight into what the party actually plans to do if elected, says a U of A political scientist. (Photo: Alex Guibord via Flickr)

As the federal election on Oct. 21 approaches, Canadians will soon be inundated by the campaign slogans of the parties. Slogans embody hours of research with focus groups in an attempt to both sum up and focus the entire campaign in a short phrase. While slogans aim to resonate with voters, they don’t really provide much information upon which voters can make decisions.

Campaign slogans are often repetitive, echoing one another as well as the slogans of the past.

The Liberal slogan asking us to “choose forward” is very similar to their campaign slogan in 2004 prompting us to “move forward.” The Green Party borrowed its slogan “Not left. Not Right. Forward together” from further afield, drawing on Winston Churchill’s command, “Forward together.”

As the campaign ads roll out over the next few weeks, Canadians can also look forward to seeing Liberal Party leader Justin Trudeau moving forward on various forms of transportation, Conservative Party leader Andrew Scheer trying his best to remind us of the good old days under former prime minister Stephen Harper, and various politicians shaking the hands and patting the backs of “regular” Canadians in an attempt to show us that they can connect and do care.

The images, slogans and campaigns, however, do little to inform the public about what the parties actually plan to do when elected. In order for us to make a truly informed decision on voting day, we need to decide what matters most to us and look to the platforms of the various parties for information.

As of the writing of this column, much of that detailed information is hard to find or has not yet been released. While most of the parties are similar on some issues—no politician ever promises to slash health care—there are some stark differences.

The NDP, Greens and Liberals all propose variations of a strong, more progressive plan to deal with Canada’s climate emergency. As expected, the Conservatives are putting forward a much more traditional plan. The People’s Party actually refutes the scientific consensus on climate change and says that there is no real evidence of catastrophic consequences if we continue on our path of carbon emissions.

The economy is always a key issue in an election, and I can safely predict that the Conservatives will probably advocate for spending restraint and that the Liberals will most likely promote targeted spending to boost the economy.

Another key issue is likely to be immigration. The NDP TV ad recently released for Quebec tackles this issue head-on through the identity of party leader Jagmeet Singh, who appears without his turban.

While Trudeau, during his time as prime minister, has attempted to contrast Canada’s immigration policies with those of President Donald Trump’s United States, the Conservatives want a return to Harper’s policies, guided by being “fair, orderly and compassionate.” The biggest outlier, again, is the People’s Party, which wants to repeal the Multiculturalism Act—arguably one of the defining features of Canada—and dramatically reduce immigration.

According to CBC’s poll tracker, which aggregates and weights the results of all polls based on methodology and reliability, the Liberals and Conservatives are close together at about 34 per cent, and the NDP and Greens have 10 to 14 per cent of Canadians voting for each.

This election promises to be contested and close, and requires Canadians to get informed and have their say.

Shauna Wilton is an associate professor of political studies at the University of Alberta’s Augustana campus.

This opinion-editorial originally appeared Sept. 17 in the Camrose Booster.