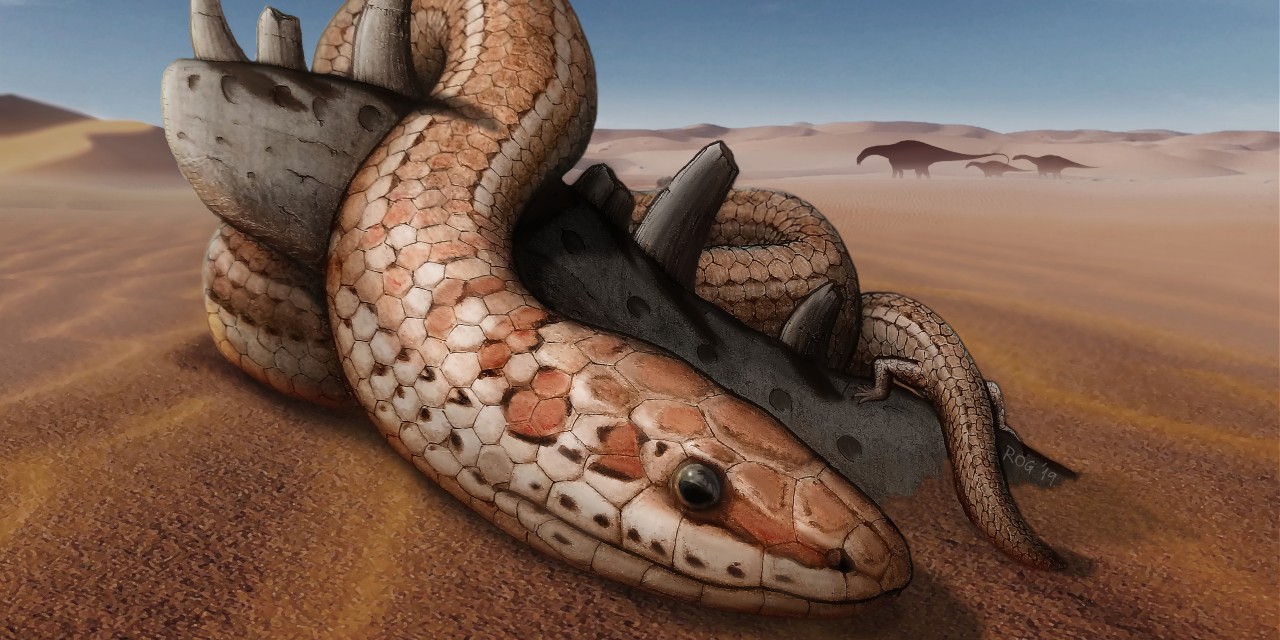 Artist's rendition of Najash, a snake with hind legs that lived 95 million years ago in what is now Argentina. A well-preserved fossil of the snake is helping paleontologists understand how its modern descendants evolved. (Illustration: Raúl Gómez)

By MICHAEL CALDWELL and ALESSANDRO PALCI

On very rare occasions, an exceptional fossil is unearthed that provides an extraordinary glimpse into the evolution of a group of organisms.

This time, it is the beautifully preserved skull of an ancient snake with rear limbs, Najash rionegrina. Our study of this fossil has been published in the journal Science Advances.

This and other new fossils help answer long-standing questions on the origins of snakes, such as how they lost their limbs and evolved their highly specialized skulls.

Najash rionegrina is named after the legged biblical snake Nahash (Hebrew for snake), and the Río Negro Province in Argentina, where the fossils were discovered. Fossils of Najash are about 95 million years old, and were first described in Nature from a fragmentary skull and partial body skeleton that preserved robust rear limbs.

This rear-limbed fossil snake garnered a great deal of media interest as it followed earlier reports of fossil marine snakes with rear limbs. What made Najash unique was that it was a terrestrial snake living in a desert, not an aquatic snake living in the ocean. In addition, the fossils were not compressed flat by the weight of overlying sediments, and so they were preserved in three dimensions, unlike the fossil marine snakes.

Unfortunately, that first description of Najash relied on a very fragmentary skull. Scholars of snake evolution were left to guess at what the head of these ancient animals might have looked like.

We know from their shared anatomy that snakes evolved from lizards. We also know that the skulls of snakes have been key to their successful and highly specialized feeding adaptations. New Najash fossil skulls would be highly informative on the pattern of snake skull evolution.

Looking for fossil vertebrates is an act of patient, painstaking discovery. It requires you to be close to the ground, scanning the grit, pebbles, rocks and sediments for a sign of bone. You must pick up each piece, inspect it closely, put it down and then repeat, hour after hour. At La Buitrera, you are scorched by the hot sun, pelted by driving rain and frozen by chilly Andean winds.

But it’s all worth it. Particularly when, as happened to Garberoglio, he finally picked up a pebble, only a few centimetres long, to find a small, ancient, bony face staring back at him.

“I found a snake skull!” 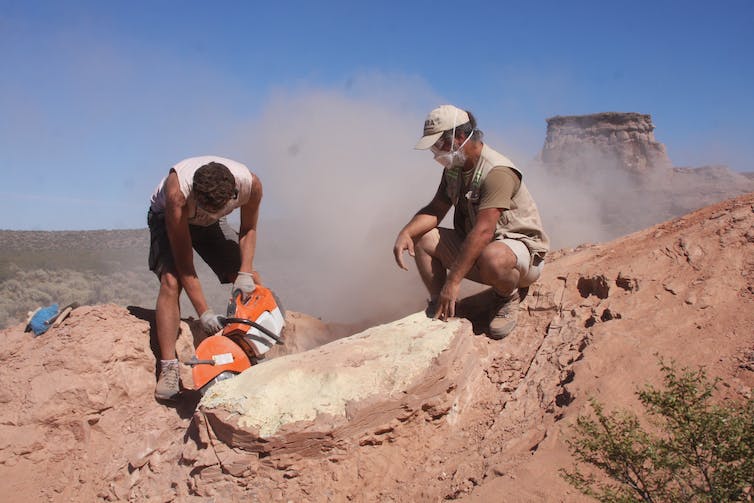 Rougier asked to inspect the fossil himself and found that, to his surprise, Garberoglio was right—there it was, an almost complete, 95-million-year-old, 3-D preserved snake skull.

It has been 13 years since Najash was named and seven years since Fernando’s discovery. Today, the long hunt has produced its reward of a treasure trove of new skulls and skeletons of Najash from the fossil rich sites at La Buitrera.

A long-standing hypothesis is that snakes evolved from a blind, burrowing lizard ancestor. A group of small, worm-like, small-mouthed burrowing snakes, known as scolecophidians, have long been considered to be the most primitive living snakes.

The new Najash fossil material shows that the skulls of that lineage of ancient snakes were nothing like those of scolecophidian snakes. Instead, Najash and its kind had large mouths with sharp teeth and some of the mobile skull joints that are typical of most modern snakes. However, they still retained some bony skull features of more typical lizards.

In evolutionary terms, Najash tells us that snakes were evolving towards the skull mobility necessary to ingest fairly large prey items, a landmark feature of many modern snakes.

Critical information is also preserved in the bone-by-bone details preserved in these new fossils of Najash. For example, for a very long time, the rod-like bone located behind the eye of modern snakes—called the jugal—was thought to be the equivalent of the postorbital bone of their lizard ancestors. The idea followed that the jugal was absent in all snakes, fossil and modern.

The new skull of Najash demonstrates conclusively that this is not correct. The bone below the orbit in Najash has the same shape, position and connections as the L-shaped jugal of more typical lizards. This demonstrates that the lower bar of the jugal was lost through snake evolution, leaving behind a rod-like jugal in modern snakes. It is the postorbital bone that has been lost, not the jugal.

The skull of the fossil snake Najash. (Photo: Fernando Garberoglio)

These new specimens of Najash are an excellent example of the predictive power of science. Hypotheses such as the presence of a jugal in snakes can be supported by the discovery of new data that fulfil those predictions. What happens as a result is that an old hypothesis is falsified and a new one is verified.

In short, the skull of Najash tells us that ancestral snakes were very similar to some of their close lizard relatives, such as big-bodied, big-headed lizards like Komodo dragons. This is a far cry indeed from the idea that snakes could have evolved from tiny, blind, worm-like, small-mouthed ancestors; no known fossils of ancient snakes resemble at all the supposedly primitive, small-mouthed scolecophidians.

Michael Caldwell is a professor of vertebrate paleontology at the University of Alberta. Alessandro Palci is a research associate in evolutionary biology at Flinders University.

This article originally appeared Nov. 20 in The Conversation.