Problem of concussions and head injuries in hockey won't be solved until attitudes about playing through pain change, argues sports historian. 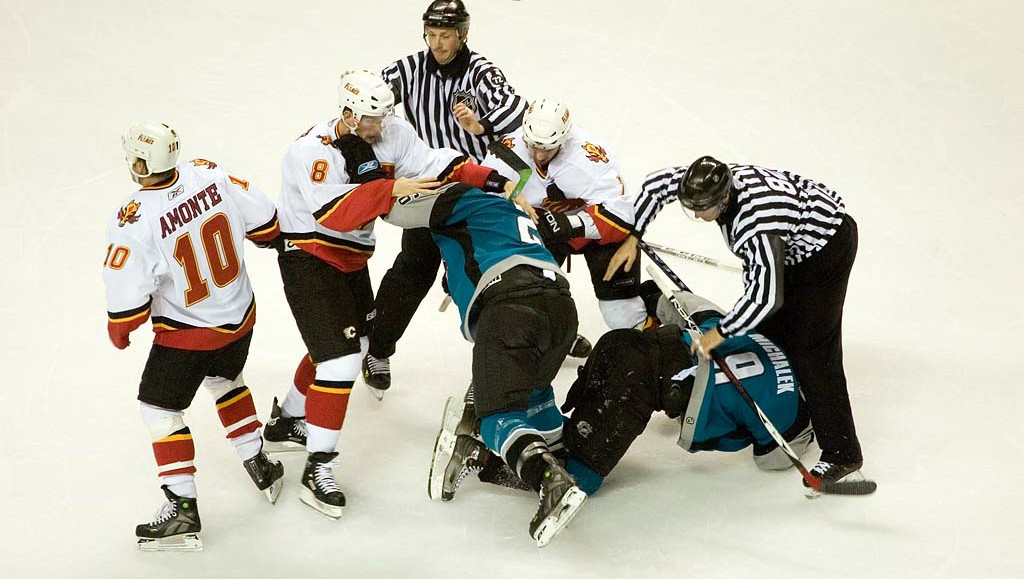 The ability to dish out and take physical punishment has always been glorified in hockey culture, says sports historian Stacy Lorenz. (Photo: Xgeorg via Wikimedia Commons, CC BY 2.0)

Since the beginnings of modern hockey in the late 19th century, violence has been accepted as “just part of the game.” Hard checking, slashing and fighting have always been regarded as key elements of high-quality and exciting hockey.

Our understandings of the sport, and what it means to those who play and watch it, have also been closely connected with cultural constructions of masculinity. The violence and roughness of sports like hockey have traditionally been seen as acceptable—even necessary—in the building of manly character. When injuries and, occasionally, deaths, occurred in rugged sports, supporters argued that the benefits of such activities for boys and young men far outweighed the harmful consequences of violence. In hockey culture, there is also a long-standing belief that players should accept a high degree of violence, tolerate pain and injury and persevere through difficulty and danger.

For instance, some of the historical research I have conducted with my colleague, Geraint Osborne, examines a series of notable incidents of on-ice violence that occurred during the 1907 hockey season. Following a particularly rough match between the Ottawa Silver Seven and the Montreal Wanderers, assault charges were brought against three members of the Ottawa team for stick attacks that left several Montreal men bleeding and unconscious on the ice. One of the most significant features of media coverage of this particular game was the questioning of the manliness of Montreal players, who were disparaged as “squealers.” An executive with the Ottawa club expressed this view when he told the Ottawa Citizen, “The Ottawa players received just as many blows as the Wanderers; they were black and blue after the match, but, unlike the Wanderers, they didn’t lie down. Ottawa took their taps like men and the Wanderers should be the last ones on earth to put up a squeal.”

Other observers noted that the main difference between the two teams was that the Silver Seven could take their lumps in manly fashion, while the Wanderers were soft and weak. “The Ottawas were guilty of several offenses that could have been well cut out, but they got their share of the bumps,” stated the Ottawa Evening Journal. “The only real difference is they can take all kinds of knocks and never quit, while if a Wanderer player got any kind of a jab he had to be hurried to the dressing room for a breathing spell.”

The fear of a perception of unmanly squealing also made representatives of the Wanderer club reluctant to criticize publicly the conduct of the Ottawa players, and to pursue suspensions for the attacks. “It was thought that perhaps Wanderers would take the matter up themselves with the league, but there is no prospect of this,” reported the Montreal Gazette. “They will let the matter rest on the report of the officials, and avoid all cause for a charge of squealing.”

Today, the culture of hockey still celebrates this willingness to administer and withstand physical punishment. Like their counterparts over 100 years ago, hockey players continue to be judged on their ability to endure pain and to play hurt, even at the risk of their long-term health and well-being. Such attitudes are especially concerning when they are applied to concussions and head injuries. For example, in a 2017 study of under-reporting of concussions among minor hockey players, Michael Cusimano and his colleagues at the University of Toronto stressed “the need to alter the culture of violence and tough play in hockey,” since praise for “masculinity and heroism” discourages the reporting of concussion symptoms.

The persistence and power of these historically constructed views of violence and masculinity must be recognized and challenged if we are going to address issues around health and injury in hockey effectively. The concussion problem will not be solved, for instance, by searching only for medical, scientific and technological answers. Changing the deeply entrenched attitudes about “playing through pain” at the heart of sport culture is essential in preventing and treating head injuries in the future.

Stacy Lorenz is an associate professor of physical education and history at the University of Alberta's Augustana campus.

This opinion-editorial originally appeared Oct. 9 in the Camrose Booster.