The idea that we need to cleanse and detoxify our bodies seems to have become a culturally accepted fact. This feels especially true around the holidays.

There is no solid science to support the idea that we need to detox our bodies in the way the purveyors of detoxification suggest, says health trend debunker Timothy Caulfield. 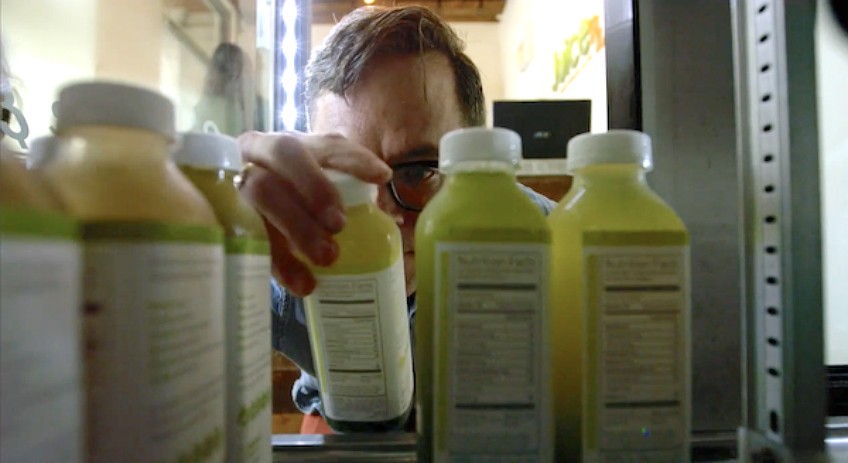 Holiday detoxes promise to cleanse our bodies of toxins, but the wellness trend isn't backed by science—and may even be harmful in some cases, says U of A health law expert Timothy Caulfield. (Photo: VisionTV/Peacock Alley Entertainment)

Almost every day, our local newspaper runs an advertisement for a product that will, allegedly, help you detoxify your liver, which, apparently, we all need to do. It is a full-page ad. It has impressive medical-ish diagrams and science-y sounding terminology.

Every morning my reaction is the same: Do people really believe this stuff?

The idea that we need to cleanse and detoxify our bodies seems to have become a culturally accepted fact. This feels especially true around the holidays, which are associated with heavy foods and even heavier shame about what that turkey and gravy and wine might be doing to our insides. After a weekend of indulgence, wellness gurus cry, your body is begging for a detox. But is it?

Many alternative practitioners push the idea of detoxification. A study I conducted with my colleague, Christen Rachul at the University of Alberta, found that detoxification is one of the most common services marketed on websites for naturopath clinics, which includes everything from detoxifying colon hydrotherapy (a.k.a. an enema) to ionic foot baths (a.k.a. sticking your feet in an electrically charged tub of water). And there are also countless chiropractors, homeopaths, acupuncturists and holistic nutritionists who offer detoxification services.

The rationale that is usually presented for these products and practices goes something like this: The world is full of chemicals and toxins that need to be flushed from our bodies—because who wants toxins in our bodies?—and doing so will give us more energy, vitality and general oomph. And, by the way, you will also lose weight and appear more radiant. You might even start to glow. (Indeed, the desire to glow was Katy Perry’s explicit justification for one of her detoxes.)

In reality, there is absolutely no solid science to support the idea that we need to detox our bodies in the way the purveyors of detoxification suggest. Our liver and kidneys handle the removal of waste from our bodies. When you pee you are detoxifying. There is little evidence that special teas, diets, magnets or exercises help this process in any clinically meaningful manner. As Yale neurologist Steven Novella has noted, “A healthy liver and pair of kidneys are all most of us need to sufficiently ‘detox.’”

Detoxification proponents rarely identify which toxins their products will target and how, exactly, they remove toxins or “unwanted heavy metals” or generally help the body to do a job it is already designed to do.

To give you a sense of just how evidence-free the idea of detoxification is, even the NIH’s National Center for Complementary and Integrative Health, an entity that is often criticized for being far too lenient on pseudoscience, has stated that “there isn’t any convincing evidence that detox or cleansing programs actually remove toxins from your body or improve your health.” Thus, even the champions of woo say this woo isn’t worth it.

In addition, some forms of detoxification can be harmful. A colon cleanse, for example, has the risk of perforating the bowel and causing nausea, dehydration and vomiting. And many detoxification diets are little more than unsustainable crash diets that lack the required nutrients.

Given the complete absence of supporting evidence and potential harms, why does detoxification continue to have so much cultural resonance? While there is undoubtedly a lot going on here—including effective marketing and fear-mongering about harmful chemicals—I think two things are particularly important to the enduring power of the detoxification myth.

First, the idea has great intuitive appeal. It feels correct, partly because it leverages a simplistic—and completely incorrect—version of how our body works, which is that our innards can somehow be scrubbed clean like a sanitation system. Detoxification lends itself to the use of powerful rhetorical devices and imagery, like diagrams of the body getting flushed of toxins, which can play on this intuition. Research has found, for example, that the use of similes and metaphors can, for better or worse, be a powerful form of health messaging, heightening perceptions of risk and benefit. The same is true with images. So when a clinic tells us that a “healthy colon is like having healthy plumbing in the house—when your plumbing is clear, the water runs smoothly, allowing pipes to drain out waste water and anything that’s no longer needed,” it makes sense. It sounds purifying. Sign me up to get my plumbing cleaned.

Second, from the perspective of the individual user, it can appear like detoxes actually work, thus generating an endless stream of positive testimonials. And we know that stories and testimonials can be very persuasive, often overwhelming even a mountain of evidence or a broad scientific consensus.

I have some personal experience with this phenomenon. For my book, Is Gwyneth Paltrow Wrong About Everything?, I tried a Goop-endorsed detox plan. This was, basically, a 21-day crash diet. It involved extreme calorie restriction, the consumption of a shake for breakfast and dinner, and most challengingly, no coffee. (The last requirement almost killed me.) Completing the detox was tough. When I made it the full 21 days it felt like a major accomplishment. I also lost a bunch of weight.

The multivitamin industry rakes in billions of dollars. But science says we're not getting healthier.
You can certainly see why people, including celebrities, rave about the effectiveness of these kinds of detox plans. You get a buzz from doing something tough and you may lose some weight—which, let’s be honest, is often the real, unstated goal. But in reality I just ate fewer calories during my detox diet. Of course I lost weight! (And, by the way, the weight came back almost immediately.) There was no magical detoxifying, whatever that even means. Well-controlled studies—ones that account for this kind of perception bias—are needed to determine if a detox program actually provides the promised detoxification.

So when you hear a celebrity talk about the benefits of a particular detox—be it weight loss, increased energy or glowing skin—remind yourself that a testimonial is not evidence. And don’t get fooled by compelling imagery about the benefits of detoxification. Our bodies are not made up of a system of tubes that need to be cleaned and unclogged via juices, trampolines or strict, completely unsustainable diets.

The next time you pee, say a silent thanks to the detoxifying work done by your kidneys and liver, because science tells us they are all that are really needed, detox-wise. With all the other detoxification nonsense, you are just flushing your money, time and energy down the proverbial toilet.

Timothy Caulfield is a Canada Research Chair in Health Law and Policy in the Faculty of Law and School of Public Health, author of Is Gwyneth Paltrow Wrong About Everything? and host of the television series A User’s Guide to Cheating Death.