Notions of ethnic and cultural "purity" in the Middle Ages are historically inaccurate and outdated, argues English professor. 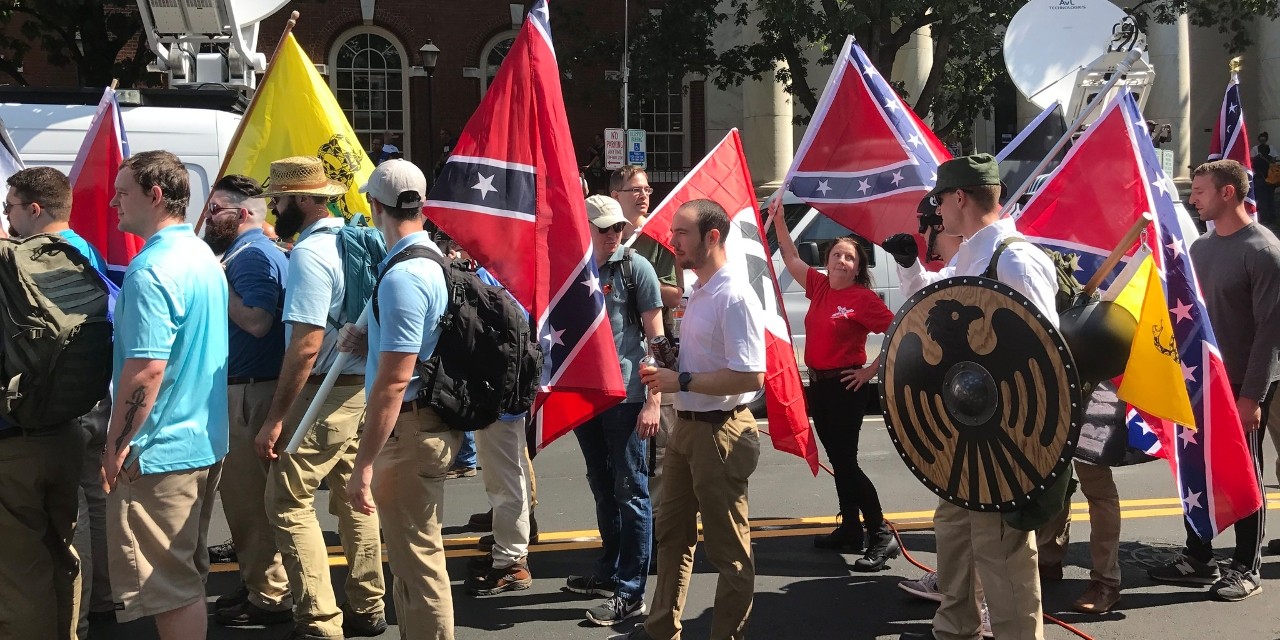 Marchers at the Charlottesville “Unite the Right” rally in 2017 misused a symbol of a black eagle in a round shield—a symbol associated with a saint of African descent in the early Middle Ages—to promote white supremacist views. (Photo: Anthony Cridder via Flickr, CC BY 2.0)

The Middle Ages are having a moment, both for good and for ill. Game of Thrones, Lord of the Rings, the History Channel’s Vikings, BBC’s series Robin Hood and Merlin all attest to the popularity of “medievalism”—that is, an imaginative recreation of the Middle Ages. Examples of this appropriation of medieval culture have been in the news quite a lot over the past few years. A much less benign and more alarming attraction to medieval culture is also widespread among groups promoting racism, xenophobia and white supremacy.

The most horrific instance occurred in Christchurch, New Zealand, where the accused perpetrator of two mosque shootings was in part inspired by Charles Martel—a Frankish duke who defeated Abdul Rahman Al Ghafiqi, commander of the Andalusian Muslims, at the battle of Tours-Poitiers in 732, and who has become an icon among islamophobic groups.

Closer to home, the Charlottesville, Virginia, “Unite the Right” rally in 2017 saw white supremacists appropriating a range of medieval symbols, such as Odin’s Cross. This appropriation is not new, of course. The Soldiers of Odin, Ku Klux Klan and the Nazis have all used medieval iconography to define themselves.

What all these groups have in common is their promotion of a distorted image of medieval Europe that supposedly existed in racially and culturally homogeneous units. Such views of the Middle Ages are both historically inaccurate and outdated. They ignore the way that medieval people themselves understood categories such as race, ethnicity and culture—categories that did not exist then as we understand them today—and apply a view of history that locates racial “purity” in a distant past.

One of Geoffrey Chaucer’s Canterbury Tales gives us a clue as to how medieval people understood these fluid categories. At the start of The Man of Law’s Tale, a sultan in Syria falls in love with the daughter of the Roman emperor. Chaucer describes the young Roman as beautiful and virtuous, and the sultan’s love for her is faithful and enduring. At no point is the Syrian racialized: there isn’t a single reference to his complexion.

Such colour-blindness is not unusual in pre-modern literature. But it does invite us to ask what medieval people thought of such notions as race, ethnicity and culture—notions that, by the way, did not acquire the meaning they currently have until after the Middle Ages.

One way to understand how medieval people viewed diversity is to speak their language, which was Latin. When Geoffrey of Monmouth describes the different ethnic groups that inhabit the island of Britain in the 1100s, the word he uses to distinguish Anglo-Normans, Britons, Picts and Scots is “populus,” a relative of our word people. As with its modern usage, “populus” carries political and biological connotations—a people are connected by ties of kinship but also united by being subject to a single political authority.

Then, as now, this term was fuzzy: a person in the Middle Ages could belong to one people but then belong to another if they were able to uproot themselves and relocate to another land. This relocation was not as uncommon as we might think, and we have written accounts of individuals who abandoned one cultural community to join another.

Did biology matter? Yes, insofar as medieval people believed in notions of community that traced their origins back to a small group of founding members. The other word medieval writers use to talk about race, “gens,” captures this idea of community being united along lines of kinship and language. Again, however, this category was fluid, and one could become a member of another “gens,” often through marriage or migration.

What is important is that any clear sense of a single European cultural identity did not exist in the Middle Ages. Any nostalgia for a European past that was ethnically and culturally homogeneous is based on a misunderstanding of the period as well as a desire to invent an idea of racial purity. The Middle Ages were infinitely richer and more complex than the narrow and two-dimensional vision of xenophobic groups who use images taken from this period to promote hate and division.

Brandon Alakas is an assistant professor of English at the University of Alberta's Augustana Campus.

This opinion-editorial originally appeared Dec. 10, 2019, in the Camrose Booster.