COMMENTARY || How much is a zombie apocalypse like a pandemic?

Film portrayals of barren streets and public panic resemble the real world in the grip of COVID-19, says U of A cultural historian. 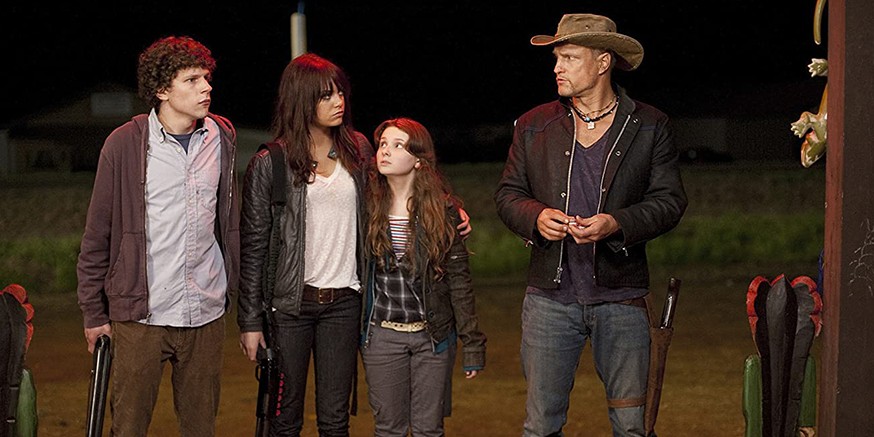 Popular films like the classic "Living Dead" trilogy and "Zombieland" (pictured) mirror the threat in people’s minds as we deal with barren streets and fear-mongering amid the COVID-19 pandemic, says a U of A professor who teaches a course on how zombies are used metaphorically in society. (Photo: IMDB)

As the COVID-19 virus spreads, and more and more people begin to practise social distancing, mainstream media outlets like the Washington Post have referred to the resulting crisis as the "zombie apocalypse”—citing, for example, the eeriness of “zombie-apocalypse empty streets.” What does the trope of the zombie apocalypse have to do with the current COVID-19 pandemic?

As a musicologist and cultural historian, I teach an interdisciplinary university course called “Seminar of the Living Dead,” which examines how zombies are used metaphorically in our society, often for purposes of socio-political commentary and critique, or philosophical inquiry or to challenge cultural norms.

Zombies are meaningful to us because they function as “empty signifiers”: they don’t mean one thing, but rather they can be used to explore how humans respond to a wide range of issues and crises—including “the other,” or disease, or social decay, or the revolutionary proletariat or environmental problems—and the ethical conundrums they can create.

George A. Romero’s classic Living Dead trilogy offered pointed criticism of contemporary society, focusing on racism, consumerism and the corruption of scientific and military institutions. More recent films in this vein, such as The Girl With All the Gifts, Zombieland and World War Z, invoke 21st-century hot-button issues such as economic disparity, the migrant crisis and environmental catastrophe, but also provide surprisingly deep meditations on family, gender roles and human spirituality.

The current COVID-19 pandemic began in much the same way zombie plagues are represented: first, vague reports of a new disease tentatively appear in the media, but with an epicentre far from “us”; the disease soon appears to be worsening and spreading exponentially; the origin remains obscure; the people in charge can’t seem to agree to a co-ordinated response; normal life is disrupted; and eventually borders become meaningless as the viral infection grows out of control.

In the zombie apocalypse, society ultimately collapses into bloody anarchy and the living are consumed; in our case—so far—many of us are just on an extended spring break staycation, albeit one with limited toilet paper.

Apocalyptic zombie films also play with the same sorts of uncertainty, fear and rumour-mongering that have characterized much of the discourse around COVID-19. Early zombie films were intentionally vague about where the “zombie virus” originated. More recent films show the zombie plague emerging from third-world countries, but some—such as Train to Busan, 28 Days Later or Resident Evil—implicate corporatism and the military-industrial complex, positing the virus as a biomedical experiment gone wrong, or in a more sinister vein, as a bioweapon unleashed upon the world.

We can see echoes of this cynical worldview today, especially in the unfettered social media discourse surrounding the current pandemic: it ranges from speculation about which weird animal species and cultural practices may have given rise to human COVID-19, to darker conspiracy theories suggesting the virus was deployed globally and purposely by some malevolent government.

While there is often no cure to be found in zombie apocalypse films, when there is, it is usually biomedical. In World War Z, for example, the film culminates in the protagonist spontaneously testing a hypothetical treatment on himself in a lab, in a frantic attempt to eradicate the zombie plague; in I am Legend, the protagonist—a virologist—conducts decidedly irregular and unscrupulous experiments on the infected to come up with a vaccine.

This “race for a cure” trope, in which normal biomedical practices and ethical guidelines are bent or even broken for the sake of efficacious treatment, certainly resonates with the daily news reports we are receiving. Researchers are rapidly identifying and replicating the COVID-19 virus, government and private laboratories are rushing into clinical trials of possible vaccines, and a range of current drugs, such as anti-malarials, are being used as temporary, experimental substitutes.

Finally, just as zombie movies aren’t really about zombies, so the COVID-19 pandemic is less about the virus and more about our individual and communal responses to the sudden and scary upheavals in our daily lives. Fortunately, we don’t seem to be heading down the road of the zombie apocalypse and its “lock your doors and every man for himself” ethos. Instead, a willingness to make personal sacrifices in order to flatten the curve of infection, to reach out and help each other, and to protect the weakest among us—to remain human, in other words—appears to be the much stronger impulse.

Alexander Carpenter is a professor of music at Augustana Campus.

This opinion-editorial originally appeared April 14 in the Camrose Booster.

COMMENTARY || How much is a zombie apocalypse like a pandemic?