U of A sociologist recommends policy measures based on research into excessive use of force by police. 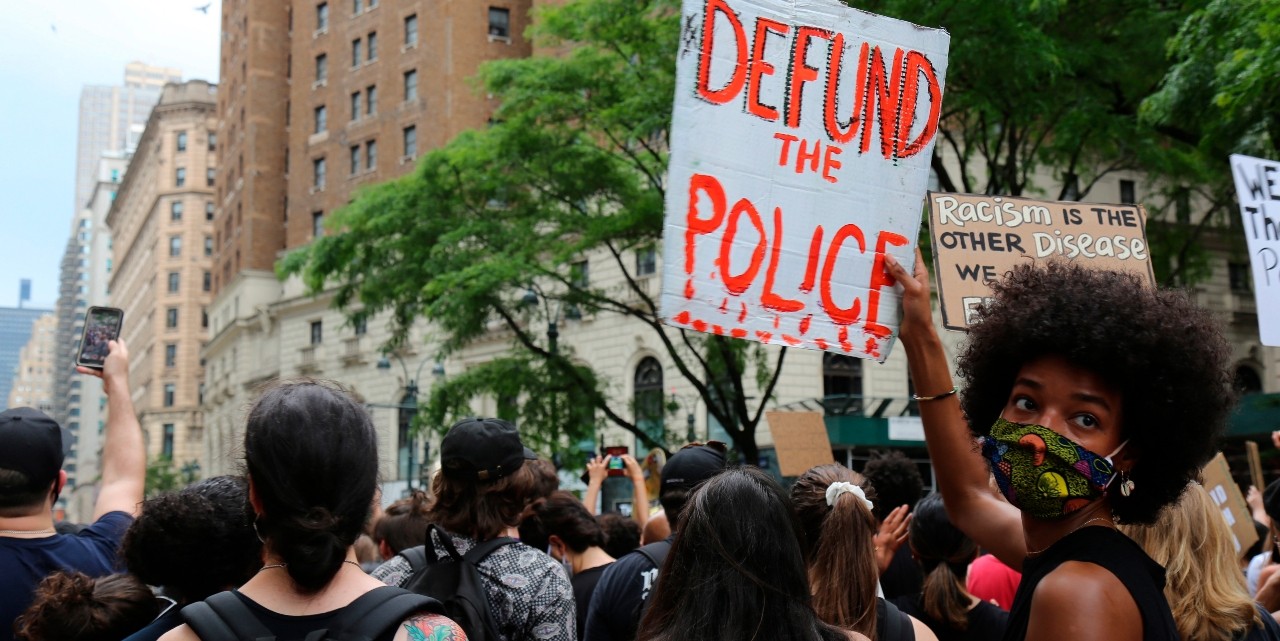 Protesters march on June 6, 2020, in New York. Demonstrations continue across the United States in protest of racism and police brutality, sparked by the May 25 death of George Floyd in police custody in Minneapolis. (Photo: AP/Ragan Clark)

The global condemnation of the death of George Floyd, one of the latest in a constellation of officer-involved deaths of unarmed civilians, has grown into a worldwide social movement for disbanding or defunding police.

At the far end of the debate, there are those calling for abolishing the police altogether. On the other hand, there are those wishing to defund the police. This means shifting significant material resources from police departments to social services for issues such as mental health.

In cases of mental distress or welfare checks, for example, social service providers intervene rather than police, who have proven ill-equipped to deal with people in mental distress.

There is growing acknowledgment that the attitude of officers towards the human rights of suspects needs to change, as do the numbers of police-involved killings. The research on excessive use of force by police and the sociological context and psychological characteristics of killer cops point to useful policy measures.

Killer cops and those who routinely mistreat civilians tend to be action-oriented. Research suggests that they are prone to boredom and suffer from major personality disorders. These include mood swings, impulsivity, lack of empathy, narcissism and anti-social personal disorder. Many of these traits begin early in life.

Diversity workshops, training or cultural sensitivity have limited utility to help such officers. The primary solution is to not hire them in the first place. This speaks to the need for greater psychological screening by police organizations.

A 2014 report by former Supreme Court justice Frank Iacobucci, submitted to Toronto Police Service following the death of Sammy Yatim in July 2013, calls for “screening out psychopathology and screening in for desirable traits such as emotional intelligence, empathy, tolerance of diversity, and patience.”

The evidence in support of reducing deadly force by hiring more women in police departments is overwhelming. Female officers are less likely to use (excessive) force as they deploy de-escalation techniques and engage verbally.

There is no agreement on what constitutes a reasonable number. A gender-balanced police service should be ultimate priority. I suggest a minimum threshold of 40 per cent female officers.

Officers without university degrees populate the ranks of killer cops. Officers with university degrees are more likely to request mental health support for suspects and demonstrate a higher appreciation for the complexity of social life, individual problems and subtleties of working in an increasingly diverse environment.

Officers with university degrees exhibit stronger verbal skills, effective communication and empathy. The Iacobucci report recommends recruiting officers from “specific educational programs” such as nursing and social work in order to foster “a compassionate response to people in crisis.”

In Canada, most killer cops appear to be white men. An ethno-racially diverse police service is integral for building public trust and inclusivity.

Much of the current training for many police organizations focuses on deployment of lethal force or marksmanship. That’s a waste of time and sets up officers for frustration given today’s realities. Once out of training, officers realize that people get meaninglessly drunk, abusers beat their spouses and citizens experience psychotic episodes.

Somehow, the police are required to respond to all these matters. These are in fact some of the most common issues brought to police attention. These scenarios may be frustrating for action-oriented officers. Action-oriented officers may see only moral failing in each case and respond with disdain and unnecessary force.

The professional officer will see “clients” in need of bureaucratic assistance and attempt to de-escalate.

There is a need to overhaul officer training and extend it to at least one full year of rigorous classroom engagement with human rights, mental health issues and diversity, among others.

The main officer involved in George Floyd’s death had 17 complaints in his file. Three of those involved shootings, with one death. This is a poor disciplinary record.

Such officers make policing more difficult and dangerous. The Minneapolis Police Department bears responsibility for keeping such a person in service.

Undesirable people may sometimes enter into police service but must be promptly removed once their engagement with colleagues, superiors and the public begins to reflect certain troubling patterns.

The Alberta Serious Incident Response Team (ASIRT) charged two officers in June 2020. They were the first charges brought forward against officers by ASIRT since its establishment in 2008. This is mind-boggling given incidents of excessive use of force in Alberta. Tolerating errant cops is dangerous for public trust.

Kill-and-go means any officer who kills an unarmed civilian or a suspect who had a weapon but did not deploy it against an officer is dismissed from service and prosecuted.

The three strikes proposal is similar to the disused California anti-crime law of the same name. Any officer involved in three excessive use-of-force incidents in which a civilian is mistreated and sustains injuries is automatically dismissed from service and prosecuted. There should be no expiry to each strike across an officer’s career.

Policing is also a well-paying occupation relative to entry qualifications and length of training, at least in Canada and many parts of the U.S.

The RCMP notes that the annual salary of a newly sworn-in officer is $53,144 and increases to $86,110 within 36 months of service. There are post-doctoral fellows working on life-saving biomedical research who make less than $50,000 a year, despite possessing hard-earned PhDs. The government and public should get value for the money spent on police by selecting appropriate people.

Temitope Oriola is an associate professor in the Department of Sociology.

This opinion-editorial originally appeared June 10 in The Conversation.