COMMENTARY || How the media makes sense of women in power

When women leaders have unconventional family lives, the media responds by trying to fit them into more stereotypical boxes, say researchers. 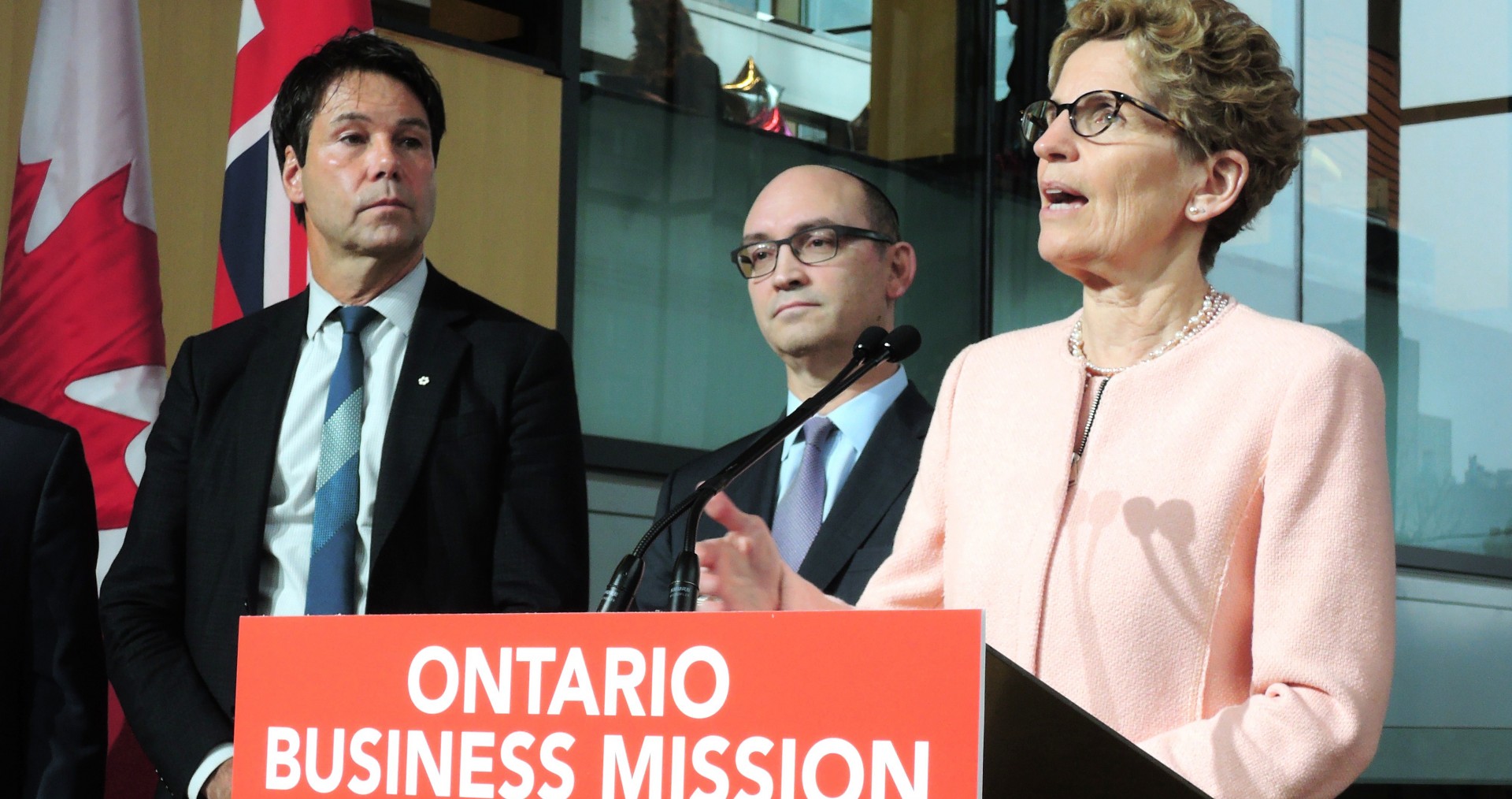 Former Ontario premier Kathleen Wynne, seen here at an announcement, was often described in the media as the "grandmother-premier," largely ignoring the fact she was the first openly gay premier in the country.

When asked to draw a picture of a leader, most people draw a man. If asked to draw a portrait of a political leader’s family, most people would depict this man surrounded by his loyal wife and adoring children. These pictures would not be far from reality. Most government leaders are men whose wives and children have proven to be invaluable political accessories.

But this taken-for-granted picture of the politician’s family rests on the outdated assumption that men take charge of business and political affairs, while women take care of the household. What happens when women rise to elite political positions, and how are their familial roles reported by the media?

Our research has answered these questions by analyzing news reports about six former and current Canadian premiers who happen to be mothers. Unlike most female government leaders, all six of these women have children and three have grandchildren. We looked at how their family lives were described and evaluated in newspaper articles published in the seven days after their rise to power, when journalists were introducing them to the public as political leaders.

We found that news coverage of the women premiers with conventional family lives (Alberta’s Rachel Notley, Newfoundland and Labrador’s Kathy Dunderdale and Quebec’s Pauline Marois) paid very little attention to spouses and parenting roles. When attention was paid, much of that was perfunctory.

In contrast, the intimate relationships and children of the three premiers who challenged the traditional boundaries of marriage and motherhood – Premiers Kathleen Wynne (Ontario), Alison Redford (Alberta) and Christy Clark (British Columbia) – were routinely observed and evaluated for political meanings. News writers emphasized what many considered to be the ‘unusual’ family lives of these women. Thus, by depicting Wynne, Redford and Clark as supermoms, the media aimed to normalize their political ambitions and make the women more understandable by the public.

The trope of “Leave-it-to-Beaver”-style traditional mothering was abundant in reporting about Wynne. One article boasted that the province “may have been last in line to get our woman premier, but hey, we’re the first to have a lesbian grandmother premier.” However, most other coverage largely ignored the fact that Wynne is a lesbian, by instead referring to Wynne as the “grandmother-premier,” “mother of three” and “grandmother of two.” Despite noting Wynne’s “trailblazing status as the first openly gay premier in Canada’s history,” she was described as the lesbian version of June Cleaver, the archetypal mom who dedicates her time and energy to her family.

A Globe and Mail article, chock full of descriptions of Wynne’s family arrangements, included assurances from Wynne’s son Christopher that Wynne was a “devoted mother.” While suggesting that a same-sex relationship “was hard for the children,” the Globe article explained that Wynne, her ex-husband, and her partner Jane, “lived in the same house for a time,” and then chose “homes with adjoining backyards” so the children could “come and go easily” between the parents’ homes. Readers were assured that Wynne was so dedicated to family life that her children propelled her into politics. Her ambition was, in this way, normalized as a feature of intensive mothering.

Bonnie Mann, a professor of feminist philosophy at the University of Oregon, has explained such a representation downplays the ‘lesbian’ element of the description ‘lesbian mother’, making it “fade, empty or recede” while the ‘mother’ element of ‘lesbian mother’ is, in contrast, “revitalized, re-naturalized, and redeployed.”

In Alberta, Alison Redford’s family life departed from the ‘normal’ political family in two respects. First, most women enter political leadership roles when their children are in their teenage years or older, but Redford’s daughter Sarah was nine when her mom became premier. Sarah was regularly named in news reports about Redford’s victory, with most citing her exact age or commenting on her youth. Second, Redford had divorced and remarried while her daughter was young.

Thus, Redford’s nuclear family – although it had been disrupted – was subsequently rebuilt, and mentions of Redford’s current husband and ex-husband reminded Albertans that Sarah enjoyed the parental guidance of both dad and step-dad. Journalists reminded readers that the late beloved premier, Peter Lougheed, also had young kids while he was in office. As a result, Redford’s capacity to juggle parenting and politics was not questioned. Indeed, one journalist referred to Redford simply as a working mom. By describing herself as a woman who understood the experiences and needs of every other working mom in the province, Redford appealed to ‘ordinary’ Albertans with young families. Furthermore, having reclaimed the traditional nuclear family by marrying again, Redford was able to use her family as a form of political currency.

Christy Clark was a divorced mother of a nine-year-old son when she took office as premier of British Columbia. Unlike Redford, she had not remarried, and her single status was emphasized in news reports. Clark was called a single mom, a single hockey mom, and even a nursing mom – when Clark was a BC cabinet minister, she took breaks from meetings in order to nurse her son Hamish. In fact, Hamish often took center stage in news coverage of Clark’s political ascent, and the new premier was forced to address blunt questions about how she could manage the job while also devoting herself to parenting. In response, Clark pointedly reminded journalists that almost all politicians – including the prime minister of the day – have families: “Stephen Harper manages to go home for dinner with his kids every night …. Every family has their own circumstances and makes their own decisions.”

Yet while insisting that women and men should not be judged by different standards, Clark acknowledged the efficacy of appealing to gender stereotypes by underscoring her devotion to her son. “Hamish is the most important thing in my life and he always will be,” she said when she became premier in 2011. Our research shows that Clark was subtly encouraged to explain how she could be a good premier and a good single mother, with the support of her son.

The cases of the lesbian grandmother, the working mom and the single hockey mom teach us that marriage and motherhood matter in news reporting of political leaders when they inhabit unconventional family structures. Journalists attempt to make sense of these leaders by fitting their allegedly atypical families into stereotypical boxes. Premier Mom is welcomed as long as she can be understood as a devoted caregiver as well as politician. Such representations highlight persistent barriers within women’s pathways to political leadership that must be broken. Hopefully, by introducing more political moms, news-makers can confront cultural biases and help create new pictures of political leaders, pictures which reflect the rich diversity of Canadians’ family lives.

COMMENTARY || How the media makes sense of women in power