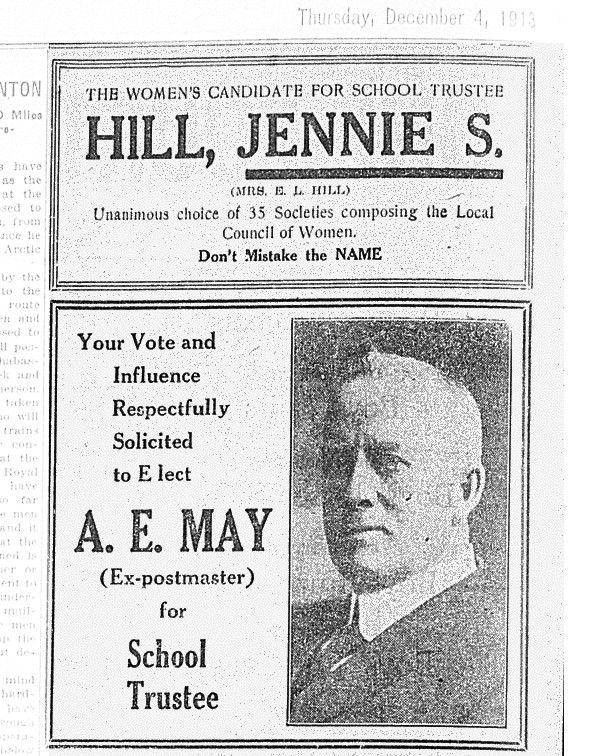 How one of the U of A’s first graduates overcame “snake in the grass” election tactics to become the second woman to hold municipal office in Edmonton. 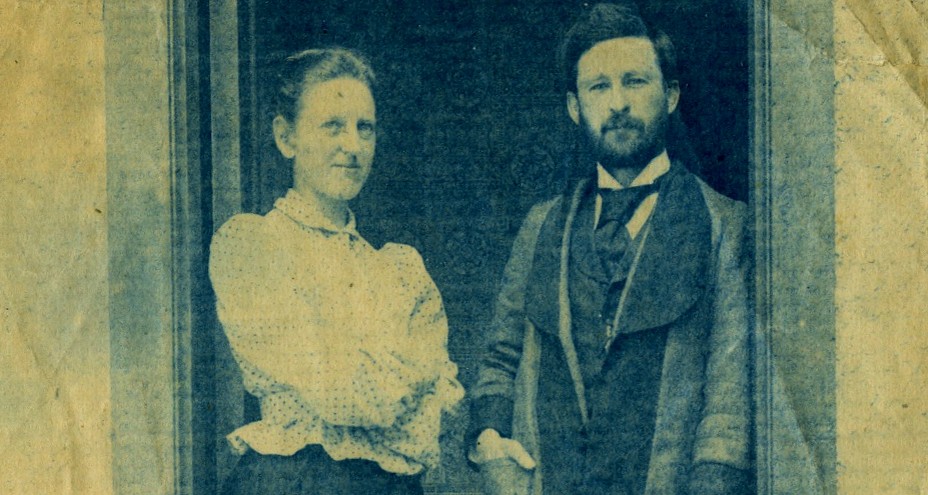 This family photo is likely of Jennie Stork (left) with Ethelbert Lincoln Hill in Ontario in the 1890s. The two were married in 1893, and both went on to earn master's degrees from the University of Alberta in 1911. (Photo: University of Toronto Archives, E. Marjorie Hill fonds, B1986-0106)

In 1911, the degree of master of arts in English and history was conferred on Jennie Stork Hill at the University of Alberta’s first convocation. She was one of two students awarded an MA that year, along with three master of science degrees, and she was the only and first woman.

Born Jane Stork in Bolton, Ontario in 1867, Hill was one of the first female students admitted to the University of Toronto, graduating with her BA in 1890. She was then head of the Department of Mathematics at Moulton Ladies’ College in Toronto. After moving to Edmonton in 1909 she taught high school, and completed her MA with a thesis on “Gladstone and Reform.”

She was a poet, and mother of a daughter. Her spouse, Ethelbert Lincoln Hill—one of the master of science graduates in 1911—was a provincial school inspector and then Edmonton’s first city librarian. In 1911, Stork Hill was the first woman nominated to the University of Alberta Senate, but she lost that election. Nevertheless, she persisted.

In December 1913, the Edmonton Local Council of Women nominated Stork Hill for school trustee. Edmonton’s earliest women candidates for municipal office encountered opposition, disapproval and nefarious tactics. In the winter of 1912, Edmonton’s city charter was amended to allow women owning or renting property to vote in municipal elections. It was not clear however, whether women could be candidates for election.

This was tested in the election of December 1912, when the Edmonton Local Council of Women, representing 35 women’s organizations in the city, nominated teacher Bessie Nichols for school trustee. Her eligibility was disputed, but eventually Nichols was permitted to run after an amendment to the city charter was rushed through the Alberta Legislature. Nichols won, becoming the first woman to hold municipal office in Edmonton.

Jennie Stork Hill became the second one year later. Ill health forced Nichols to tender her resignation in 1913. Those skeptical of women in politics—an idea that persists to this day, unfortunately—believed the resignation of Nichols proved women should not hold public office.

Stork Hill faced even more antipathy and rancour than Nichols. She was bold and articulate, however, and she became a formidable political opponent. She caused a sensation a few days before the election in December 1913 when she charged that her opponent and incumbent, Dr. Frank Crang, was using “snake in the grass” methods. At a public meeting, Stork Hill stated that there was a deliberate attempt to “steal” her election by placing on the ballot a Mrs. Alice Hill, whom she described as an “unknown woman.”

Stork Hill claimed this was done to confuse and divide the voters who would find the name “Alice Hill” first on the ballot. She declared to the packed audience, “My name is Jennie Stork Hill. Just remember it when you come to mark your ballot paper. It is Jennie Hill, not Rabbit Hill or any other Hill. And it is Stork too, not the Pelican bird, but the stork that is supposed to have the especial care of little children.”

Stork Hill said she would not be “defeated by the snake in the grass tactics that have been adopted by my opponents. I have received worse treatment from them than they would have accorded a man.” She was convinced that the whole school board was conspiring to be sure that a woman would not be elected. She further claimed Crang was stealing her platform and circulating false stories about her.

A reporter for the Edmonton Bulletin located the mysterious Alice Hill, who turned out to be the spouse of a Canadian National Railway blacksmith. She admitted that yes, she was a candidate, that her name would be on the ballot, that she would not give an interview or allow her photograph to be taken, and would not speak at any of the campaign meetings or appear at all before the public. She would not say who nominated her. When asked if she intended to get acquainted with the electors, she responded, “No, I can do as I like can’t I?”

It was impossible to escape the conclusion that Alice Hill was placed on the ballot to confuse voters, as Jennie Stork Hill contended.

Crang emphatically denied any knowledge of Alice Hill, and he bitterly attacked Stork Hill at a public meeting, calling her a woman with a “serpent’s tongue.” His comments were “howled down” and met with a “storm of yells and hisses” from the audience amid cries of “shame” and “throw him out.”

Hill replied that she was the representative of at least 1,000 Edmonton women involved in religious, patriotic and philanthropic work, and she asked Crang if they would deliberately choose a candidate who had a serpent’s tongue.

Crang lost that election. Jennie Stork Hill was elected as one of four school trustees, receiving 3,287 votes, and Alice Hill 867. If Alice Hill had not been on the ballot, Jennie Stork Hill would have received the most votes of all school trustee candidates. Edmontonians at the public meetings and through their votes overwhelmingly supported Hill, who served as trustee for two years.

Jennie Stork Hill taught at Victoria High School, and she continued in public service in Edmonton, serving on the board of the Royal Alexandra Hospital, and as president of the Edmonton Local Council of Women. She was national convener of economics for the National Council of Women, working alongside U of A classics professor Geneva Misener, who was national convener of education. Stork Hill was also active in the YWCA and on the Board of Women’s Work of the Baptist Church. She was well known as a poet in the 1920s, publishing in the Toronto Globe on themes from the West such as “Chief Ermine-Skin” and “Royal Northwest Mounted Police” that indicate she shared the views of settler suffragists that the dispossession of Indigenous people was right and inevitable. She and her husband and daughter (Esther Marjorie Hill, the first woman graduate in architecture in Canada) moved to Victoria, B.C., in the 1930s and Stork Hill died there in 1939.

I discovered Jennie Stork Hill while researching my book Ours By Every Law of Right and Justice: Women and the Vote in the Prairie Provinces (UBC Press, 2020). She was one of many activists in the cause who have been forgotten and erased from history. The E.L. Hill Park in Edmonton’s Strathcona neighbourhood is named after her husband.

Sarah Carter is a professor of history in the Faculty of Arts and the recipient of the 2020 Killam Prize in the Humanities.