COMMENTARY || LGBTQ equality moved closer in 2017 but fight isn't over 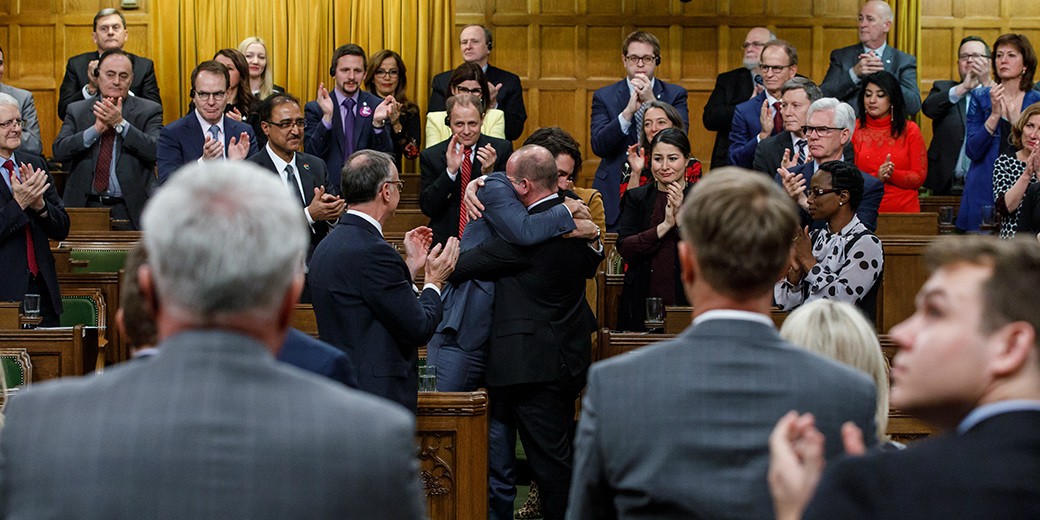 Prime Minister Justin Trudeau hugs Liberal MP Randy Boissonnault after making a formal apology to people harmed by federal legislation, policies and practices that led to the oppression of and discrimination against LGBTQ people in Canada, in the House of Commons Nov. 28, 2017. (Photo: Prime Minister of Canada)

In many ways, it was an unprecedented year for human rights and LGBTQ equality in Canada. Here are 10 critical moments that moved our nation forward—and the challenges remaining to be overcome.

Canada continued to be a world leader in LGBTQ rights when Prime Minister Trudeau, with all-party support, offered a heartfelt apology and compensation for the federal government’s “gay purge.”

In 2017, the federal government also established a new LGBTQ2S secretariat led by MP Randy Boissonnault, the prime minister’s special adviser on LGBTQ2S initiatives. Look for progress to continue to accelerate with this foundation in place.

After many years of debate and delays, Canada turned the corner on trans rights by amending federal human rights legislation and strengthening hate crimes provisions in the Criminal Code.

Alberta continued to be a battleground for LGBTQ rights when Jason Kenney returned from Ottawa and proposed to “out” LGBTQ youth in schools. The Alberta government responded by passing the most comprehensive gay-straight alliance legislation in Canada, and most likely the world. Alberta is now an unlikely leader in LGBTQ inclusion and the protection and support of vulnerable LGBTQ youth.

HIV prevention took a major step forward as B.C. joined Ontario and Quebec by providing free anti-HIV medication pre-exposure prophylaxis (PrEP) coverage to at-risk groups. In 2018, all provinces and territories should follow this important health prevention strategy. It will save not only costs, but also lives. Canada can continue to be a world leader in HIV prevention.

5. Trump, trans and the reversal of LGBTQ rights

Under the guise of religious liberty, U.S. President Donald Trump introduced a plethora of policy changes rolling back hard-won progress on LGBTQ civil rights. These changes included a ban on transgender soldiers in the military, rescinding LGBTQ protections in schools and eroding diplomatic support for LGBTQ international human rights initiatives.

These moves have emboldened many social conservatives in Canada who have become more vocal and virulent in their attacks against LGBTQ inclusion. The question is whether hate will continue to grow and gain traction in 2018.

As the U.S. government withdrew support for LGBTQ international rights, Canada stepped forward by fast-tracking funding and support for LGBTQ asylum seekers and refugees. Non-profit organizations like the Rainbow Railroad network offered life-saving supports to LGBTQ people facing persecution and death in their home countries. In 2017, Canada became an international lifeline and beacon for human rights across the globe.

The movement to decriminalize the non-disclosure of HIV took a small step forward when the federal government issued new guidelines and, in turn, the Ontario government announced it would no longer prosecute cases in which individuals have a suppressed viral load. In 2018, we need to focus less on criminalization and place more emphasis on education and support for those living with and affected by HIV.

Perhaps the federal government’s biggest disappointment is the slow movement in ending Canadian Blood Services’ long-standing gay blood ban. The unscientific ban, which was reduced from five years to one year, in 2016, for men who have sex with men, represents the biggest failed promise of the Liberal government. Will 2018 be the year we see it end?

9. Scoring for inclusion: Pride Tape and the NHL

The NHL continued moving toward becoming the most LGBTQ-inclusive professional sports league with “Hockey Is for Everyone Month,” which featured 21 teams hosting You Can Play nights featuring Pride Tape in support of LGBTQ players, fans and the LGBTQ community.

Pride Tape, a made-in-Canada initiative, was also included in the Hockey Hall of Fame, 100 Years of the NHL and the Canadian Museum of History’s Hockey Exhibition.

Some elected school board trustees and Catholic bishops openly questioned support for human rights in schools and put forth unscientific theories about “gender ideology” corrupting students and schools.

Schools will continue to be a battleground in 2018 as gay-straight alliances gain unstoppable momentum and new LGBTQ policies and inclusive curriculum are enacted across the country.

Even though 2017 represented an unprecedented year in the advancement of LGBTQ rights in Canada, the fight for human rights is far from over. Powerful backward forces continue to loom on the horizon.

Canada has a real opportunity to become a beacon of light for human rights both at home and abroad.

In 2018, Canada can strive to build on the founding principles of our nation and continue to be a leader for diversity, equality and human rights around the world—a world, hopefully, where we can all be free to live, learn and love without fear.

Kristopher Wells is an assistant professor in the Faculty of Education and the faculty director of the Institute for Sexual Minority Studies and Services at the University of Alberta.

This article originally appeared Jan. 3 in the Edmonton Journal.

COMMENTARY || LGBTQ equality moved closer in 2017 but fight isn't over