Riel's transformation from rebel traitor to cultural icon in the public imagination hasn't come without backlash, says U of A English professor. 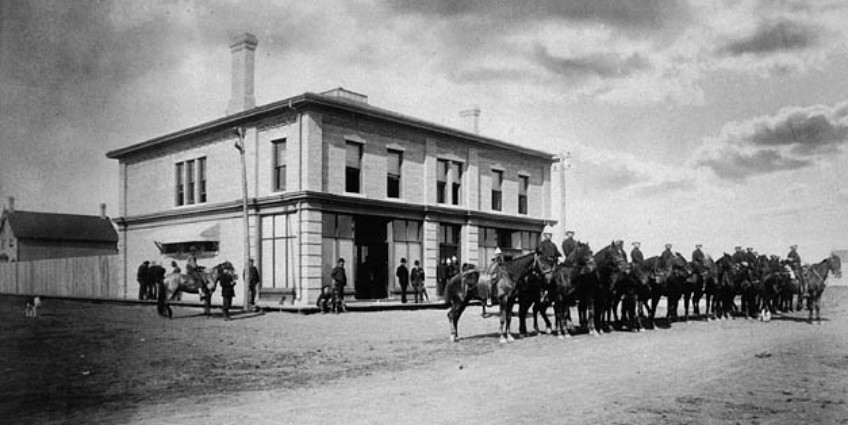 Front of the Regina Court House, during the trial of Louis Riel, which began 135 years ago in July 1885. (O.B. Buell/Library and Archives Canada)

Today, Riel is considered one of Canada’s most popular figures, easily eclipsing the country’s founding prime minister and his nemesis, John A. Macdonald.

The political metamorphosis of Riel illustrates one of the most paradoxical aspects of nationalism: how former enemies can be transformed into compatriots. Over time, individuals who had battled a given country are turned into icons of the very polity they opposed and that vanquished them.

But there are indications that a significant segment of the population has not accepted this transformation.

Louis Riel was born in 1844 into a French-speaking, devoutly Catholic Métis family in the Red River Settlement, now Winnipeg. Along with the rest of Rupert’s Land, Red River was then controlled by the London-based Hudson’s Bay Company.

When Canada acquired Rupert’s Land from the Hudson’s Bay Company in 1869, without consulting the territory’s inhabitants, Riel galvanized the residents of Red River into opposition to Canada and formed a provisional government in 1869-70.

Partly because of his government’s controversial execution of a Protestant Canadian expansionist named Thomas Scott early in 1870, Riel was banished from Canada for five years and went into exile in the United States.

While visiting Washington, D.C., in 1875, Riel underwent a mystical experience in which God purportedly anointed him the “prophet of the new world.” Soon after, his behaviour became increasingly erratic and his Montréal-based uncle, John Lee, and a series of French Canadian Catholic clergy became concerned. Riel was smuggled back to Canada and against his will in 1876, he was interned in two Québec mental hospitals.

Nearly two years later, Riel returned to the United States and eventually became a school teacher at a Jesuit mission in Montana Territory.

He was still living there in 1884 when a Métis delegation from the Saskatchewan Valley invited him to help prepare their grievances against Ottawa. Riel accepted the invitation and travelled north with his wife and two young children.

This was a fateful journey that would lead to the North-West troubles of 1885, which once more pitted Riel against the Canadian government. Riel was charged with high treason, found guilty by a jury, sentenced to death and hanged in Regina on November 16, 1885.

For decades after his death, Riel was largely perceived by Canadians as a rebel, when he was discussed at all. But his image started to change after the end of the Second World War and by the late 1960s he had become one of the most iconic figures in Canadian culture.

Riel has now been the subject of endless poems, novels, graphic memoirs, films and even a world-class opera, recently remounted and reinterpreted.

Riel’s transformation was particularly swift in his birthplace, Manitoba, which entered Canada as a province in 1870 and whose name Riel had advocated based on its existing usage grounded in the Ojibway language.

In the mid-1960s, Métis advocate Jean Allard, elected to the Manitoba Legislative Assembly in 1969, began lobbying the province’s leading citizens to have a memorial built to Riel for Manitoba’s centennial in 1970.

Thanks to Allard’s initiative, a monument to Riel by the architect Étienne Gaboury and the sculptor Marcien Lemay was unveiled on the grounds of the Manitoba Legislature in 1973.

Allard was successful in gaining support before and after the statue’s installation, but not, according to his account, with the Conservative cabinet minister Sterling Lyon, who later became premier in 1977. In a letter to the Winnipeg Free Press, published on July 19, 1994, Allard said Lyon told him in 1968 that “Riel was a traitor who deserved to hang.”

The Gabouray-Lemay statue was subject to criticism from more than one perspective. The main criticism of the modernist monument was that it presented the subject not just as tormented but also naked.

Riel’s nudity, with its evocation of poverty and mental instability, was especially distasteful and “shameful” to many contemporary Métis leaders. They mounted a concerted campaign to have Riel portrayed like “a statesman,” and almost 25 years later succeeded in having the modernist statue replaced with a traditional one by the sculptor Miguel Joyal.

Riel’s triumph would appear to be complete by 1992 when the governments of both Canada and Manitoba declared Riel a founder of Manitoba.

But there is evidence that not everyone in Manitoba is enthusiastic about the newly popular Riel. To begin with, the Gaboury-Lemay monument was often the target of violent vandalism, usually aimed at the subject’s private parts.

Even more troubling, during the so-called war of the Riel statues, a series of Manitoba premiers discovered that some of the province’s non-Indigenous citizens did not at all approve of their government’s sanction of a memorial to Riel, feelings that they had no qualms expressing in rather vitriolic language.

In retrospect, the backlash against Riel’s rehabilitation should not have come as a surprise. The fact is that Winnipeg has a history of celebrating, not Riel, but his enemies, from Thomas Scott, to the Winnipeg Rifles. The Winnipeg Rifles is the Canadian military regiment whose forerunner, the 90th Battalion, fought the 1885 war against the Métis.

According to the regiment, during the 1885 war, “the captured enemy” (the Métis) called the regiment the “Little Black Devils” because of their almost-black, dark rifle green uniforms. Today the regiment formally preserves this legend in their iconography, and also uses as its motto “Hosti Acie Nominati,” meaning “named by the enemy force.”

The city’s very cultural landscape is a reminder that it once venerated different icons, not all of whom have yet been rejected. No wonder that some of its residents are reluctant to embrace other heroes.

Albert Braz is professor of English in the Faculty of Arts.

This opinion-editorial originally appeared July 16 in The Conversation.