COMMENTARY || Lower speed limits give core residents what they want

Proposed 30 km/h speed limit on residential roads in central Edmonton makes sense for the people who live and commute there, argues U of A urban planning expert. 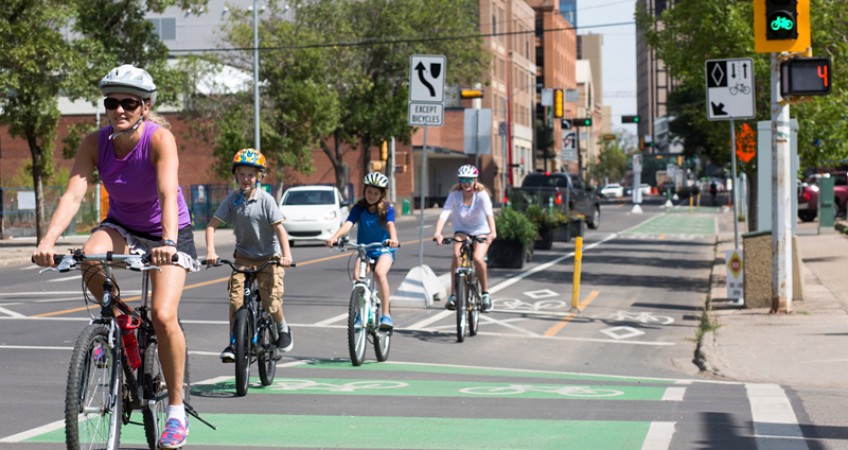 Setting a speed limit of 30 km/h in residential areas within the Edmonton core while allowing 40 km/h in suburban areas would recognize that citizens living in different areas have different priorities, says U of A urban planning expert Robert Summers. (Photo: City of Edmonton)

Streets are for street hockey, at least the streets in my neighbourhood are. They are for young kids riding bikes, for unloading and loading our vehicles, for chatting with neighbours who stop as they drive by, and for walking across safely wherever you want to.

Lately, for reasons I don’t fully understand, they also seem to be for a bunch of local kids who have discovered the joy of riding unicycles. Some days I see as many as a dozen kids on unicycles.

Streets are for cars too, but cars should take care and drive safely and slowly through my neighbourhood because all of those other users are vulnerable and it’s important that they are safe.

That’s my vision for my neighbourhood streets and it’s the vision of most of my Westmount neighbours. It’s also the vision of a citizens’ group, Liveable Streets Edmonton, who have advanced a proposal called the “Core Zone” which calls for a speed-limit reduction to 30 km/h on residential roads in the most central area of the city including downtown, Old Strathcona and the surrounding neighbourhoods.

I was thrilled to see the Core Zone proposal. At the heart of this proposal is the idea that different people in different areas of the city want different things. This isn’t news to anyone who works in real estate or to anyone that studies cities. Indeed, a recent study that I co-led on housing choice in Edmonton found that while some people want to live in walkable communities close to transit options with lots of small shops and cafes nearby, others prioritized quick access to freeways and short drives to big-box shopping centres.

A 2014 report by the City of Edmonton shows that people in the core zone prefer different approaches to commuting, with those neighbourhoods having the highest percentage of people who walk, bike or take transit to work. In recent years, a number of core-zone neighbourhoods, such as Strathcona, Queen Alexandra and others, have lobbied the city for more pedestrian-friendly roadways.

The city has been debating between putting 30 km/h or 40 km/h in residential neighbourhoods city-wide. The core zone offers the best of both worlds. While suburban streets can be set at 40 km/h, the core zone would drop to 30 km/h.

The core zone is filled with grid-based neighbourhoods, small schools everywhere, and traditional main streets along former streetcar lines. These roads were designed at a time when the primary street users were pedestrians, bicycles and horses. They are narrow, with frequent intersections, and are particularly dangerous to drive at speeds of 40 to 50 km/h. Most of us navigate them slowly in our cars, but some, oblivious to the dangers, adhere to that 50-km/h speed limit—making the streets less safe for all of us.

Good governance is accepting that areas are different both in terms of the preferences of the people who live there, but also in terms of the physical context. In this case, it means focusing on improving active transportation within the core zone through adopting sensible speed limits and implementing simple infrastructure changes.

This proposal improves the Edmonton market by emphasizing choice in the way we live and commute. It aligns well with the existing Pogo car-share zone, our bike-network plans and our core main street plans. I think it will also provide a touchstone area for urban living and active transportation that can help to change the perceptions of Edmontonians regarding ways of living and commuting.

I expect that once it is established, more neighbourhoods will want to buy in to core-zone living and start to demand a greater focus on active transportation for their neighbourhoods. Such a shift is absolutely essential in transitioning Edmonton into a more sustainable and livable city.

It made sense to put Rogers Place and separated bike lanes in the core. Similarly, it makes sense to lower speeds to 30 km/h on neighbourhood roads in the core to promote active transportation and vibrant neighbourhood streets—and street hockey—and unicycling!

This opinion-editorial originally appeared April 30 in the Edmonton Journal.

COMMENTARY || Lower speed limits give core residents what they want