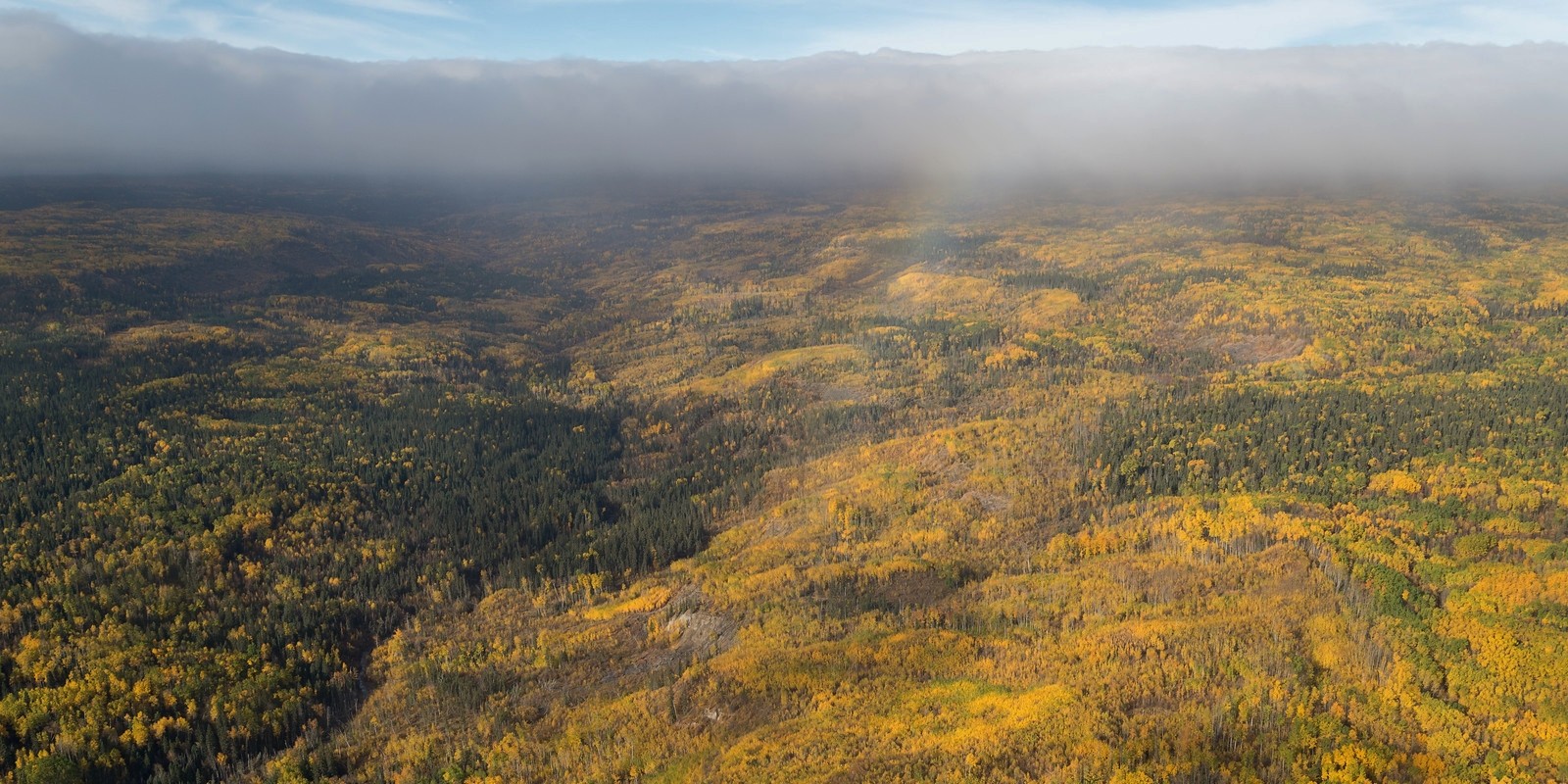 The boreal forest in the Birch Mountains of Alberta is an area identified as a high priority for conservation, according to researchers who created maps based on models of how climate change is likely to affect regions across North America. (Photo: Scott E. Nielsen)

People have spent most of the past month indoors as communities attempt to flatten the curve to limit the spread of COVID-19. For many of us, small doses of nature have helped provide solace in stressful times. In my Edmonton neighbourhood, we are keeping company with large flocks of Bohemian waxwings, urban jackrabbits and sometimes their coyote predators.

Across much of North America, the tendrils of human activity are ubiquitous outside of national, provincial and state parks. In Alberta, where I conduct ecological research, roads, pipelines and cutlines for seismic exploration crisscross the landscape. For some species—most notably caribou—we have strong evidence that the activities of modern society can cause their numbers to decline and threaten their survival.

Conservation areas can help protect species and ecosystems, but they are still relatively few and far between. We must figure out where new protected areas will be most effective, especially given the increasing influence of climate change.

Part of my work as a conservation biologist aims to do just this. My colleagues and I have produced a model-based map, covering most of Canada and the United States, that identifies broad areas where species and ecosystems may take refuge as the climate changes.

Ten years ago, as part of the global Convention on Biological Diversity (CBD), member countries agreed to 20 biodiversity targets (read: aspirations) for 2020. The most specific and achievable of these Aichi targets was the conservation of 17 per cent of Earth’s lands and 10 per cent of coastal and marine areas in parks and other protected areas.

Now it is 2020, and unfortunately we are not there yet. With 12.1 per cent of land protected as of December 2019, Canada has made good progress. Much of this has been due to work by Indigenous communities, aided by government funding, to protect vast swaths of northern wilderness under Indigenous stewardship.

Meanwhile, the loss and degradation of natural ecosystems globally continues at an unprecedented rate, and an estimated one million species are threatened with extinction. Scientists and conservationists widely agree that more ambitious targets are needed.

The enormity of climate change is also becoming increasingly apparent. (Remember that other global crisis?) As the world warms, some parks will dramatically change character, often beyond recognition.

For example, the climate conditions in parts of Wood Buffalo National Park in 2100 will closely resemble the warmer and drier region of Peace River, Alta., about 300 kilometres southwest. As a result, species will need more space to accommodate their shifts in distribution across the landscape and to compensate for the habitat loss due to wildfires that are increasing due to climate change.

In advance of a series of now-postponed meetings planned for 2020, members of the CBD drafted a proposal calling for the protection of 30 per cent of land by 2030, and 50 per cent by 2050. Clearly these numbers are not based on complex math, but they are bold and memorable. The Canadian government followed with targets of 25 per cent by 2025 and 30 per cent by 2030.

Ambitious targets are not enough. It’s important to figure out where new protected areas should be located to maximize their value as conservation investments for biodiversity.

As conservation biologists who study the effects of climate change on biodiversity, my colleagues and I used maps, based on models of future climates, to identify refugia—areas where plants and animals are most likely to persist in a warmer world—as well as climate corridors that species can use to move along with changes in suitable environments more easily. A number of these maps of climate exposure have been compiled by the AdaptWest research project and can be used by biologists and planners to map conservation priorities.

As an illustration, we used a core subset of these maps (focusing on trees and songbirds) to produce what we term climate-informed conservation priorities for most of Canada and the United States. 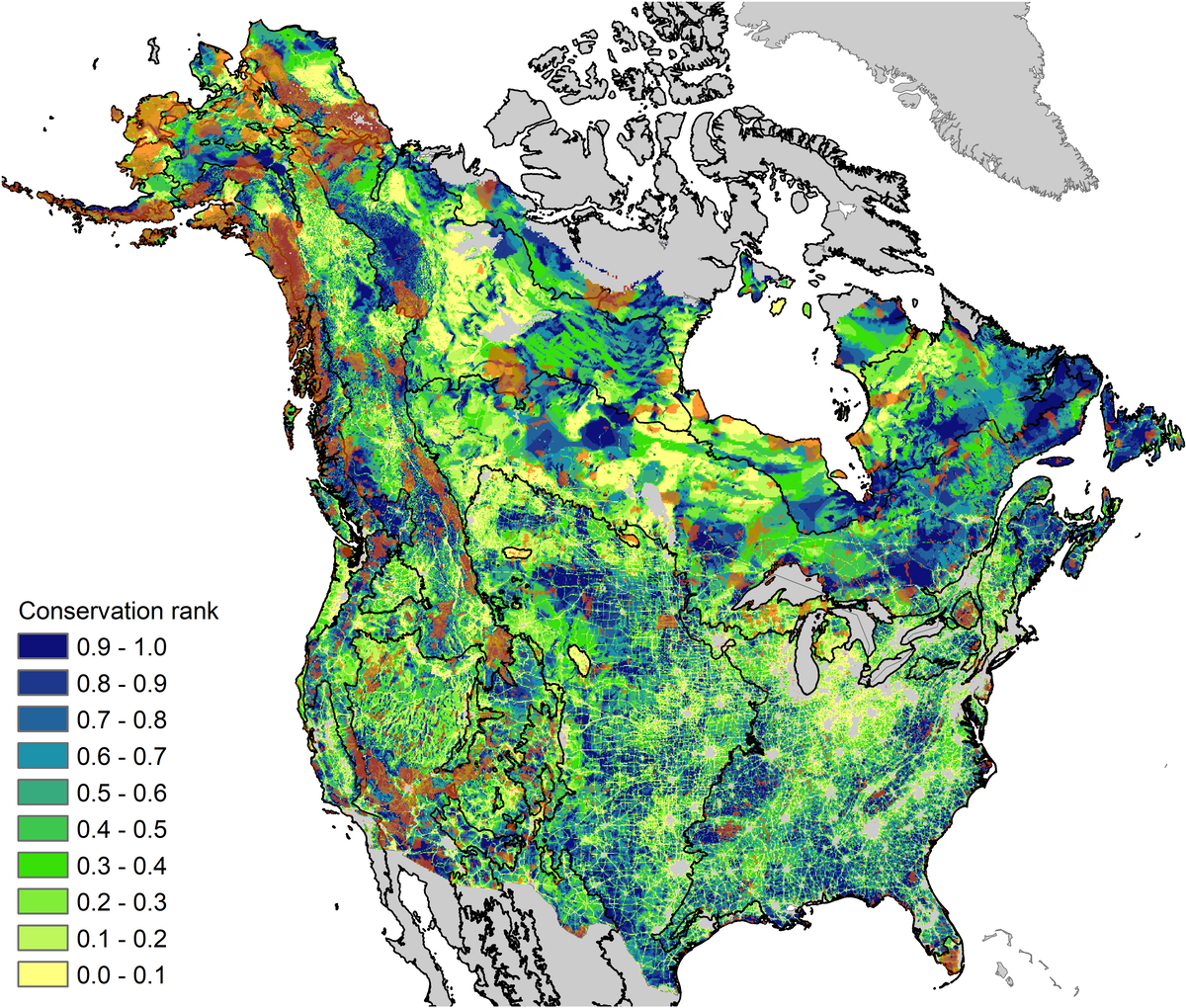 On this map of North America, climate-informed conservation ranks from 0 (lowest) to 1 (highest), with current protected areas overlaid in transparent orange. Biome boundaries are shown in black. (Image: Supplied)

These model-based maps don’t give us the answer, but they can help land planners — who are already equipped with other key information, like land costs, societal values and locations of threatened species — make more informed decisions when it comes to climate change.

Although we found that the highest-priority refugia and corridors are better protected than Canada as a whole (20 per cent versus 12 per cent protected), that still means that 80 per cent lack formal protection. Boreal and grassland regions contain the largest areas of unprotected high-priority lands, totalling one million square kilometres combined.

This year was set to be a super year for nature and biodiversity. Despite obvious setbacks, we have an opportunity now to address both the climate crisis and the biodiversity crisis head on.

Compared to battling the coronavirus, conserving biodiversity is arguably cheaper, simpler and, in many cases, good for the economy. With sustained energy, we can learn from the current health crisis the value of swift, model-based and coordinated action.

Diana Stralberg is a research associate in the Department of Renewable Resources. She thanks collaborators Carlos Carroll at the Klamath Center for Conservation Research and Scott Nielsen at the University of Alberta.

This opinion-editorial originally appeared April 22 in The Conversation.