Reliance on royalties leads to less accountable and more corrupt political systems—and not just in Venezuela, argues U of A expert. 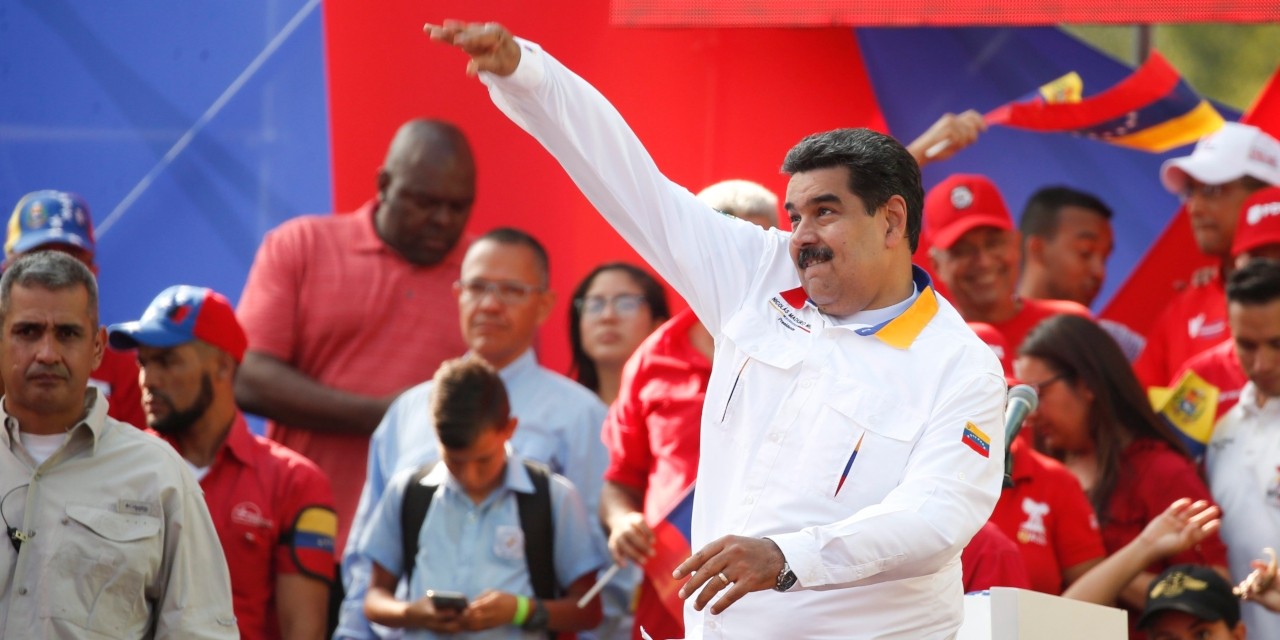 Venezuelan President Nicolás Maduro throws his handkerchief into a crowd of supporters at an anti-imperialist rally for peace in Caracas in March 2019. (Photo: AP/Natacha Pisarenko)

During the Cold War, socialism was portrayed as a gateway drug to communist orthodoxy. The crisis in Venezuela has resurrected tired old tropes about “pinks” and “useful idiots” who start out as democratic socialists, but end up marching in lockstep towards a workers’ dystopia.

United States Sen. Lindsey Graham tweeted recently that new Democratic congresswoman Alexandria Ocasio-Cortez “and her new socialist colleagues seem hell-bent on making sure that our last 12 years will be spent as Venezuelan socialists, not Americans.”

Even worse news, @AOC and her new socialist colleagues seem hell-bent on making sure that our last 12 years will be spent as Venezuelan socialists, not Americans.

A Republican National Committee email called Ocasio-Cortez a “mini Maduro,” a reference to Venezuelan dictator Nicolás Maduro, and accused her of leading the Democratic Party “to the left with nothing more than an unsubstantiated, factually incorrect socialist wish list.” Reason’s John Stossel and New York Times columnist Bret Stephens have all taken readers down the slippery slope from democratic socialism to Venezuelan disaster socialism.

It is a powerful fallacy. The bogeyman of Venezuelan “socialism” has had repercussions throughout the Americas. A close contest in last year’s Colombian presidential election swung toward the ruling party as the conservative candidate Ivan Duque accused the leftist Gustavo Petro of wanting to turn that country into Venezuela.

Even in a jurisdiction as far away as Alberta, conservatives have tried to use the Venezuelan crisis as a wedge. The right-wing Rebel Media asked whether Alberta would become the next Venezuela as the moderate leftist leader rolled out a carbon tax.

If Maduro’s Venezuela is the guiding light for democratic socialism, it has attracted the support of some rather anti-democratic leaders. It’s not Ocasio-Cortez and Rashida Tlaib who have leapt to Maduro’s defence. Rather, Vladimir Putin, Bashar Al-Assad and Recep Tayyip Erdogan, of Russia, Syria and Turkey respectively, have been among the staunchest defenders of the Venezuelan president since Juan Guaidó declared himself interim president.

There was a time in the early 2000s when Venezuela’s Hugo Chávez served as a tidy litmus test for the international left.

Much like his nemesis, George W. Bush, he divided the world into people for him and people against him. For those on the left with serious misgivings about Chávez’s penchant for authoritarianism, there wasn’t much wiggle room. The United States was the empire. The bloc of Cuba, Bolivia and Venezuela represented the revolution. Forced to choose sides, anyone wanting to maintain their leftist credentials had to pick Chávez.

Since Venezuela descended into chaos under Maduro, however, protesters have transcended political divisions.

Women’s groups and many leftist parties have turned against Maduro, while militaristic nationalists in the Middle East have become his biggest supporters. Yes, there are a few “fellow travellers”—to borrow another Cold War idiom—in the West who continue think of the humanitarian tragedy in Cold War terms. Oliver Stone, who once tweeted that his “heart goes out to Nicolás Maduro,” is a particularly egregious example.

My heart goes out to Nicolás Maduro and his leadership during this dangerous period since the Chávez Revolution. #UntoldHistory

Anyone who’s paid attention to the real cost in human suffering, however, knows that Venezuela’s crisis looks a lot like a classic natural resource curse. Venezuela, like virtually every other nation blessed with abundant fossil fuels, has known for decades that it must diversify away from its dependence on oil.

Even the CIA in the 1970s made the case that the influx of petro dollars could destabilize the country in the long term. Oil could create a class of oligarchs that would represent a target for leftist militants.

Chávez promised to redirect oil revenue into programs promoting food security and domestic farming. Yet Chávez, too, found the temptations of the rentier state too much to resist. Despite all Chávez’s lofty goals and rhetoric about self-sufficiency, the country became more dependent on the rents from oil and gas than before his so-called Bolivarian Revolution.

Chávez pumped proceeds from oil revenue into poverty alleviation programs, but the infrastructure of the industry gradually fell into decay and technocrats left for Canada and the United States. Despite it all, Venezuela still sent around half a million barrels of oil a day to the U.S. in 2018.

We know that our consumption of fossil fuels is the primary driver of climate change. But less well-known is oil’s corrosive effect on democracy. An American political scientist found that the states that most depended on the rents from the extraction of oil and gas tended to be the least democratic and the most corrupt.

Looked at through ideological glasses, the myriad problems facing Russia, Venezuela, Iran and Saudi Arabia can be blamed on corrupt right-wing politicians, Islamism or socialism, depending on your political predisposition.

These rentier states, however, all have one thing in common: they rely on the royalties from unearned income rather than taxing individual citizens to make the government work. The result is a less accountable and more corrupt political system.

If there was a gateway drug to the current crisis in Venezuela, it was oil, not socialism.

Russell Cobb is an associate professor of Latin American studies in the Department of Modern Languages and Cultural Studies.

This opinion-editorial originally appeared April 2 in The Conversation.