Controversial Netflix show pales in comparison to reality of "Sooner State," says U of A cultural studies professor and native Oklahoman. 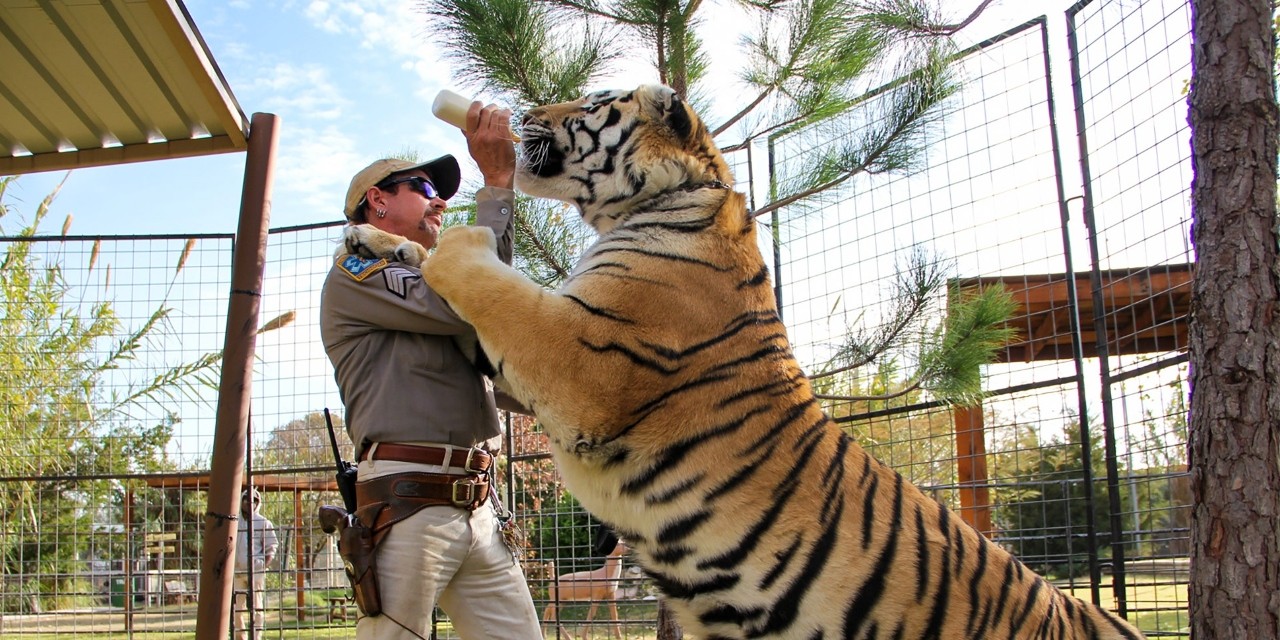 A scene from "Tiger King," currently streaming on Netflix. The show's morally dubious characters are the latest in a long line of outrageous figures in Oklahoma's history, says a cultural studies professor who hails from the state. (Photo courtesy of Netflix)

The small town of Wynnewood, Okla., might seem like an unlikely setting for a magical realist tale involving tigers, polygamy and blood feuds. But the bizarre reality of Oklahoma has never matched up to its homogeneous image in popular culture.

You could be forgiven if the state conjures up images of the musical Oklahoma! and the character Curly McLain singing “Oh, What a Beautiful Mornin’” on his horse. The truth is that Oklahoma is a place of deep trauma that cuts much deeper than anything on the Netflix documentary Tiger King.

As an Oklahoman and the author of a recent book on Oklahoma, I was bored by the show. As soon as Joe Exotic appeared on camera and stated, to no one in particular, “Let’s go blow some shit up,” I felt like I’d seen this movie before.

Oklahoma has the dubious distinction of being ranked among the top five most gun-friendly states by Guns & Ammo magazine as well as one of five states with virtually no laws governing exotic animal ownership.

The state’s health indicators are abysmal. And the state has a long and sordid history of grifters and scoundrels who have found the state’s red dirt to be fertile soil for all manner of dubious schemes.

The story of Joe Exotic is the story of Oklahoma, only with felines and sequins. The very foundation of the modern state of Oklahoma was born from an outlandish fraud, that, like Tiger King, might seem too bizarre to be real.

As the states around Oklahoma drew their legal U.S. boundaries in the 19th century, Oklahoma remained, by treaty, Indian Territory, a place owned by the Five Tribes — the Cherokee, Chickasaw, Choctaw, Creek (Muscogee) and Seminole — for as long as the grass grew and the waters ran.

Then a group of land pirates known as the Boomers showed up to homestead on unassigned lands. The Boomers engaged in skirmishes with federal troops as they tried to set up towns from scratch. They were repeatedly arrested and deported.

Finally, they succeeded in setting up a town. They sold certificates for land they didn’t own. One group of Boomers called itself “Seminoles,” deliberately sowing confusion about whether they belonged to the Seminole Nation; they did not.

Following the Boomers came the Sooners, who got their name by literally jumping the gun on a land run. Sooners struck out in the dead of night, often engaging in gun battles with African American homesteaders who had founded their own settlements in the territory. When the dust settled, the Boomers and the Sooners, who had illegally seized land, rebranded themselves as symbols of pioneer pluck.

Oklahoma became known as the Sooner State. To this day, on football game days at the University of Oklahoma, fans chant “Boomer Sooner” when the university’s football team, the Sooners, takes the field.

In the years that followed statehood, Oklahoma became home to swindlers hoping to cheat Native Americans out of their oil-rich land. The swindlers tried every trick in the book: some passed themselves off as Indigenous to take control of land. Some fabricated people and appointed themselves legal guardians of fictional children.

When those tricks did not work, some married into Native families and then proceeded to murder them. This was the case for the “King of the Osages,” William Hale. Hale dominated Osage County in the 1920s through bribery, extortion and murder.

Other characters, every bit as weird as Joe Exotic, seemed to emerge out of the red dirt of Oklahoma later in the 20th century. There was Oral Roberts, the first true televangelist, who said he saw a vision of a 900-foot Jesus in suburban Tulsa. He then talked his followers into giving him enough money to build a gold-plated hospital that would combine faith-healing and western medicine. The hospital went broke, but Roberts continued on, praying for more miracles in the Jetsons-esque Prayer Tower.

Cutting a respectable and influential figure was the strange career of the oilman Aubrey McClendon, who was partially responsible for luring—some would say stealing—the NBA team the Supersonics from Seattle and turning them into the Oklahoma City Thunder. For a while, McClendon’s company, Chesapeake Energy, was at the centre of the natural gas boom in North America.

McClendon was feted around the nation and acquired a wine cellar worth $8.4 million. He spent billions buying up leases and companies in what he called the “great North American land grab.”

McClendon seemed to be the king of Oklahoma City when, suddenly, everything fell apart. The fracking revolution created a glut. The price of natural gas plummeted and U.S. prosecutors indicted him on conspiracy charges for price rigging. The day after the charges were laid, McClendon drove his SUV head-on into a highway overpass and instantly died.

Just as weird and nefarious as Joe Exotic was the spectacular rise and fall of Oklahoma politician Ralph Shortey, chairman of Donald Trump’s presidential campaign. While Joe Exotic’s political ambitions were a front for self-promotion, Shortey’s were more political: he became a state senator and something of a national figure.

Shortey became known for his crusades against gays, immigrants and drugs, and he had a weird obsession with opposing the idea of human fetuses in food. (It’s not a thing.) Shortey’s career came crashing down when he was caught smoking marijuana in a hotel room with a 17-year-old boy whom he had propositioned for sex online.

Oklahoma has a long history of well-funded Joe Exotics, who have found a niche for themselves, aided by deregulation, religious intolerance and ignorance at the highest levels of the state’s political culture. That’s not stranger than fiction: that’s the true story of an American state.

Russell Cobb is associate professor of Latin American studies in the Faculty of Arts.

This opinion-editorial originally appeared April 23 in The Conversation.