Russia’s seizure of Ukrainian naval vessels has repercussions that could ripple far beyond Ukraine, argues U of A historian. 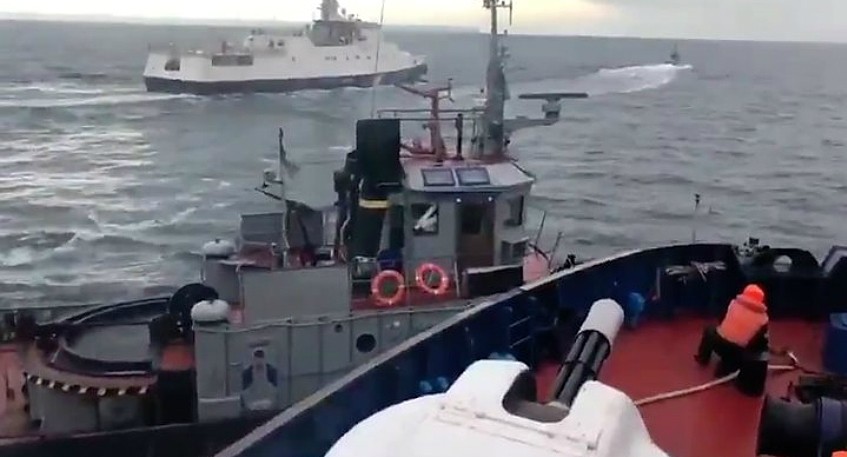 In this image taken from video tweeted on Nov. 25 by Ukrainian Interior Minister Arsen Avakov, a ship appears to ram the side of a Ukrainian tugboat in the contested Kerch Strait. Russia claimed three Ukrainian warships were seized after entering Russian waters illegally.

Russia’s violent seizure of three Ukrainian naval vessels sailing to Ukrainian ports on the Sea of Azov is but the latest instance of the Kremlin’s brazen aggression directed toward its neighbour and former colony.

The rote denials and false claims accompanying the attack can be regarded as having the same credibility as Russia’s insistence that it was not a Russian missile that shot down Malaysia Airlines flight MH17 over Ukrainian territory; that Russian intelligence operatives had nothing to do with the attempted assassinations of the Skripals, or the killing of a growing list of other critics of the Putin regime; that the ongoing war in Ukraine’s Donbas region is not being financed, supplied, partly staffed and led from Moscow; and that Crimeans freely voted to accept the stealth takeover and annexation of their peninsula.

There are several reasons President Vladimir Putin has decided to up the ante in his undeclared war against independent Ukraine, having first increased Russia’s naval forces in the Sea of Azov while at the same time ratcheting up the baseless harassment of ships going to and from eastern Ukraine.

First of all, Putin is taking full advantage of several crises that Russia itself has helped to create by skilfully working to subvert elections and undermine democracies throughout the West.

The Russian leader knows full well that the report soon to be issued by the Mueller investigation is likely to wreak havoc with the Trump administration and effectively cripple, if not paralyze, any American response to Russia’s growing belligerence.

He is also well aware that the British are currently preoccupied with their exit from Europe, just as members of the European Union are struggling to deal with the rise of radical and extremist elements in their societies—many of them fuelled by anti-EU sentiments partly stoked by Russian propaganda.

As for Ukraine itself, there can be little doubt that Putin is seeking to punish Ukrainians for a whole host of reasons, such as recently taking steps to canonically restore the ecclesiastical independence of the local Orthodox Church, irrefutably establishing that the 1932-1933 famine-Holodomor was an act of genocide, and formally declaring Russia an aggressor state.

Most important of all, Putin wants to sabotage Ukrainian efforts to fully implement the reform of Ukrainian society and to bring the country into line with other European states. He essentially wants Russia to be able to dictate to Ukraine its domestic policies in areas such as the economy, culture, language and education, and most important of all, to determine Ukraine’s foreign policy—specifically to prevent Ukraine from ever joining NATO.

But Russia also has other objectives in escalating its bullying of Ukraine. To begin with, Putin wants President Petro Poroshenko and his government to look weak, given that Ukraine will not respond to Russia’s latest act of violence with its own aggression, for fear of starting a full-blown war with its much more powerful neighbour.

At the same time, the Kremlin wants to show that international bodies ranging from the Organization for Security and Cooperation in Europe (OSCE) to the United Nations are almost powerless when it comes to dealing with Moscow’s increasingly hostile behaviour toward Ukraine.

Finally, Putin is also punishing Ukraine for the damaging economic and political sanctions that have already been levied against Russia, while simultaneously striking another blow against Ukraine’s economy by thwarting Ukraine’s efforts to get coal and steel produced in the east to international markets.

It is time that the world recognized Russia for what it is: a rogue dictatorship and a state sponsor of terrorism that is playing with fire which could easily spread far beyond the violated borders of Ukraine.

Jars Balan is director of the Canadian Institute of Ukrainian Studies at the University of Alberta.

This opinion-editorial originally appeared Nov. 28 in the Edmonton Journal.