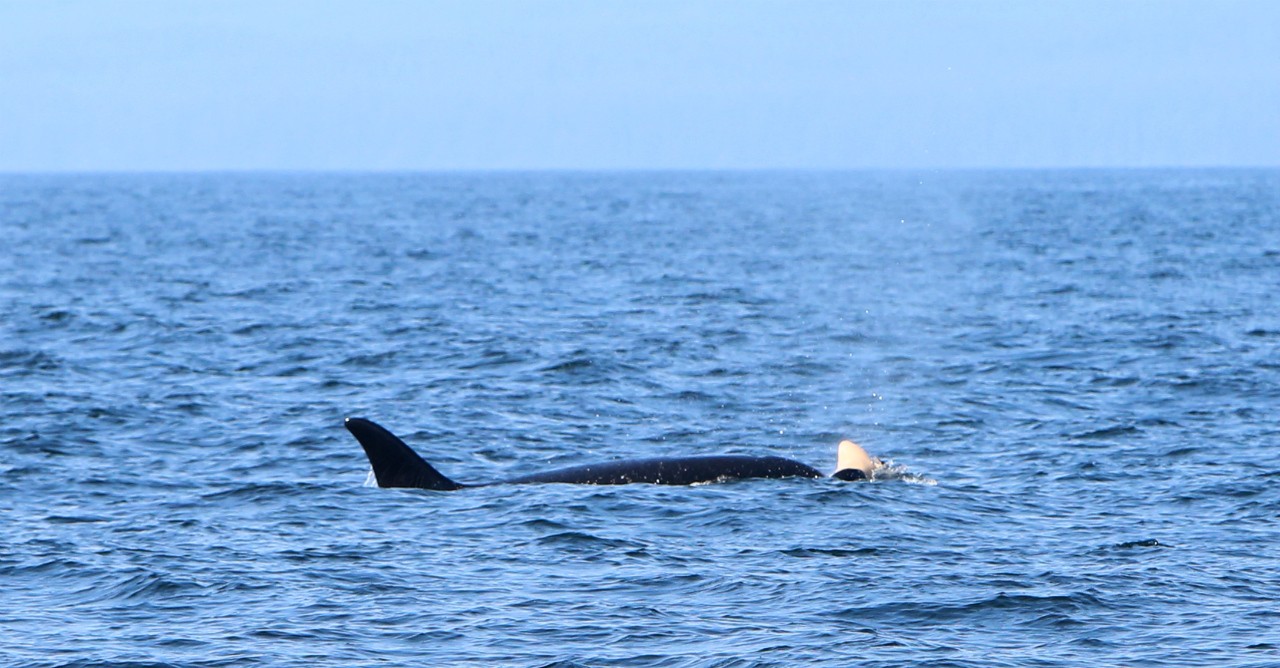 Orca J35, also known as Tahlequah, pushes her dead calf on Aug. 8 off the coast of Washington. The world's sympathy for the grieving mother whale is a chance for meaningful action to protect the threatened orcas, says a U of A expert in environmental law. (Photo: Sara Tavares, Fisheries and Oceans Canada, CC BY-NC-ND 2.0)

By CAMERON JEFFERIES and NICOLAS REHBERG-BESLER

Tahlequah, also known as J35, is one of 75 remaining southern resident killer whales that live in the Salish Sea off the coast of British Columbia and Washington state. For 17 days, Tahlequah carried the body of her dead calf on a 1,500-kilometre “tour of grief,” forgoing ordinary behaviours in favour of mourning the loss of her newborn.

Tahlequah’s tour of grief has captured international interest and has brought specific attention to the precarious future of the remaining southern residents. As Susan Casey pointedly observed in The New York Times, it is necessary to now turn this “shared sense of grief for this mother into an impetus to solve the problems plaguing the dwindling southern resident orca population.”

The southern residents are arguably the most iconic species of the Pacific Northwest. Their image can be found on postcards, in art exhibits and in the photographs of the thousands of people who pay for the chance to capture a fleeting glance from a whale watching boat. The cultural significance of the orca is much more profound for many First Nations in the region who view the species as an ocean guardian and a symbol of compassion and familial connectivity.

Presently, society approaches the conservation of orcas—and many other species—through “totemization," which is the notion that certain animals become symbolic of something worth protecting. This stance to wildlife conservation endorses a preservationist approach to the animals in question and vilifies threats to sustained preservation. This is especially apparent in continuing efforts to stop commercial whaling on the international stage, where whalers and whaling countries are subjected to considerable enmity.

In the case of the southern residents, it is more challenging to point to a single antagonist because the threats to their continued existence—the decline of Chinook salmon, polluted and degraded habitat, and an increasingly noisy marine environment—are not attributable to one industry or sector of society. They are, cumulatively, a reflection of the pressure that our 21st-century way of life places on the ocean and a symptom of continued wanton disregard for ecological limits.

The southern residents have been protected as an “endangered” species under the federal Species at Risk Act since 2001. By virtue of this listing, the government has produced a Recovery Strategy (2008) and an Action Plan (2017) with the goal of stabilizing and improving their situation. These instruments lack the regulatory urgency to address the current threats and have ultimately failed to produce any tangible results—approximately 10 per cent of the southern residents have died since 2016, and there hasn’t been a successful birth in the past three years.

On June 20, the federal minister of fisheries, oceans and the Canadian Coast Guard, and the minister of environment and climate change, concluded that the southern residents are “facing threats, which are considered imminent in the sense that intervention is required to allow for survival and eventual recovery.” Soon thereafter, new restrictions on Chinook salmon fishing, mandatory vessel distance requirements and additional efforts to monitor the quality of the marine environment—supported by a multimillion dollar financial commitment—were implemented. While necessary, these measures are, by themselves, insufficient and overdue.

What, then, must be done to save the southern residents? In the short term, the conclusion reached by the ministers should trigger the emergency protection order process under the Species at Risk Act. In short, this requires the ministers to recommend to the prime minister and cabinet that regulatory action protecting the species and its habitat be produced. An emergency protection order for the southern residents could further restrict vessel traffic and speed (including whale watching boats and other recreational craft), create confined shipping lanes that avoid seasonally important areas, mandate sound-reducing technologies for project-related construction, set acoustic thresholds for important orca habitat and establish legally regulated marine protected areas supported by an ecological understanding of the life history of these animals, affording them necessary sanctuary at biologically relevant times.

In the longer term, the government must produce a holistic stewardship plan for the southern residents and come to terms with how future use and development of the ocean—including the approved Trans Mountain Pipeline Expansion Project and its predicted seven-fold increase in oil tanker traffic in the critical habitat of the southern residents—can be justified. It also means the identification and permanent protection of southern resident critical habitat by designating new and permanent marine protected areas, as supported by additional regulatory measures.

We must not let the sympathy—and empathy—that we felt for Tahlequah drift away without meaningful action. As a totem of ocean conservation, the orca has been anthropomorphized and made to feel familiar. To be truly successful, our urgent and necessary conservation efforts must embody the realization that we must resist those aspects of the human condition that strive to develop, to expand and to consume in an unsustainable manner. We must push for the words of the Species at Risk Act to be enforced. Specifically, because this species faces imminent threats to their recovery and survival, the federal government should respond with an emergency protection order to afford them the space, resources and ecological conditions that will allow for our shared existence in the oceans.

Cameron Jefferies is an assistant professor in the Faculty of Law.

Nicolas Rehberg-Besler is an articling student at Snyder & Associates LLP in Edmonton.

This op-ed originally appeared Aug. 16 in The Globe and Mail.