COMMENTARY || The sports psychology behind 'grit'

The passion and perseverance we celebrate in movie heroes and athletes can also sustain us through adversity in life, says U of A educational psychologist. 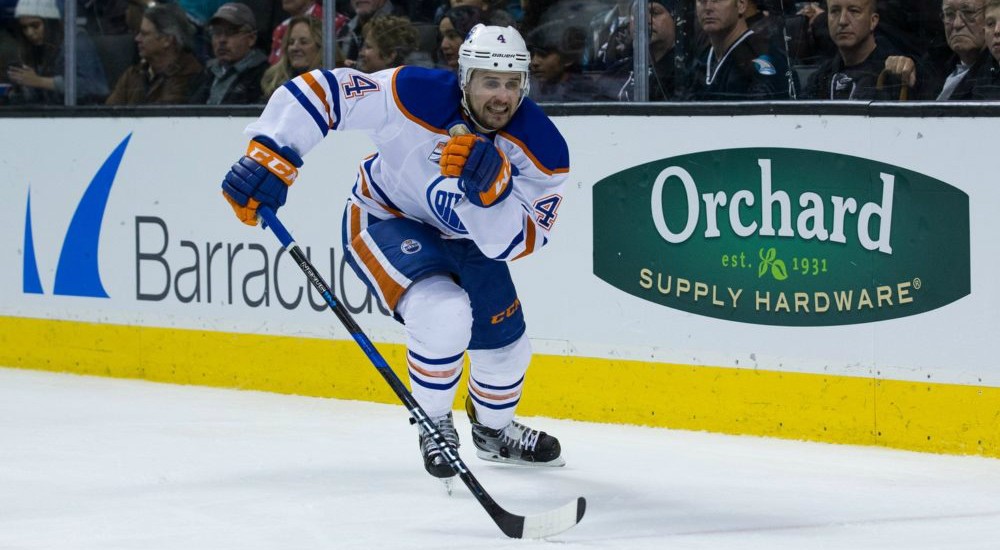 Edmonton Oilers defenceman Kris Russell is often maligned by fans but is arguably the grittiest player on the team, according to U of A educational psychologist WIlliam Hanson. (Photo: Neville E. Guard, USA Today Sports)

By WILLIAM HANSON and CHRIS SARGENT

Grit has multiple meanings, including grainy and abrasive. That’s the prevailing hockey definition, typically referencing “playing with an edge.”

But in psychological terms, grit means something else. It means passion and perseverance, and it predicts achievement and success in life and sport over and above things like intelligence and ability. In a psychologically gritty sense, passion refers to focused goal-directed behaviour over long periods of time; perseverance, to unwavering staying power. Gritty people are, in a word, determined. They don’t give up.

We’re sure you know gritty people. We do. For us, in addition to some friends and colleagues, several movie characters stand out, including Mattie Ross, Rooster Cogburn and Max Rockatansky. In True Grit, the steely-resolved, never-say-die teenager Mattie Ross avenges her father’s death with the help of equally gritty ex-U.S. marshal Rooster Cogburn. Together, they overcome one obstacle after another.

Several real-life Edmonton Oilers embody it too, like Drake Caggiula, the much-maligned third-year winger. Case in point: On Oct. 27, against the vaunted Nashville Predators, Caggiula fanned on an early first-period shot, determinedly stuck with it, and scored 10 seconds later. That’s grit personified.

Kris Russell, an equally maligned defenceman, is perhaps the Oiler’s grittiest and gutsiest player. At a team level, John Tortorella’s gritty and gutsy 2011-12 New York Rangers come to mind. That team finished with 109 points, reached the conference finals and had a plus-39 goals for/goals against.

NHLers are supremely talented and skilled. They’re not, however, equally gritty. Grit separates high-achieving teams from low-achieving teams. Do you remember, for example, the Minnesota Wild’s gritty 4-3 come-from-behind win against the Oilers Oct. 30?

And how about the Oilers’ equally gritty 4-3 OT win against the San Jose Sharks in Ken Hitchcock’s coaching debut with the team? Relentless in-game effort is key, as it leads to wins, playoff appearances and cups—more so than just talent and skill.

Hitchcock emphasizes teamwork, dogged defence and playing hard. So does Pete Carroll, the Seattle Seahawks' Super Bowl-winning coach. They both value grit, which can be taught and developed through, among other things, intense deliberate daily practice. It’s a nature and nuture thing. Not one or the other.

And it can be reliably and validly measured and quantified. Just ask Angela Duckworth, a prominent researcher at the University of Pennsylvania. She’s one of the world’s leading scholars on grit. To learn more and take the test, visit https://angeladuckworth.com/grit-scale/. How do you score?

For us, this op-ed is deeply personal and timely. As you know, November was Hockey Fights Cancer month in the NHL. In addition to being passionate, die-hard Oilers fans, we’re closely connected to cancer, most directly through the Cross Cancer Institute where we work together clinically. Chris has a rare and lethal Stage 4 liver cancer (cholangiocarcinoma). He’s 39, married and has a two-year-old daughter.

Chris and his wife also have a baby on the way. Circumstances like these shift priorities. Instead of worrying about distant outcomes, like Stanley Cups or next summer’s vacation plans, the focus sharpens, becomes more proximal, and is highly process-oriented, like trying as hard as you can and staying the course treatment-wise.

Cancer patients face tremendous challenges along the way and demonstrate profound grittiness and the urgency we crave from our sports heroes. They “dig in,” as Hitchcock likes to say.

Alas, we love hockey, we love to be inspired and we have hope. Hope is crucial in difficult times. It’s the feedstock of grit and it sustains us, even if it’s just a glimmer. In the inspiring words of legendary U.S. basketball coach and cancer patient Jimmy Valvano, whose Cinderella team won the NCAA title in 1983, “Don’t give up. Don’t ever give up.”

William Hanson is an associate professor in the Department of Educational Psychology. He specializes in assessment and evaluation, process-outcome research and health psychology. Chris Sargent has a master's degree in public health and is a multi-sport athlete and distance runner.

This opinion-editorial originally appeared Dec. 5 in the Edmonton Journal.

Being everything to everyone or being too hands-off are leadership styles that are more likely to lead to burnout in managers, according to a University of Alberta business study. “Depending on …
Read more from this release

COMMENTARY || The sports psychology behind 'grit'